The 'Trombone' Shot in Filmmaking Content from the guide to life, the universe and everything 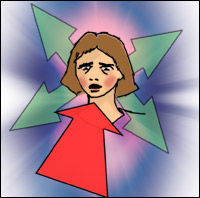 In contemporary filmmaking, the camera trick known as the 'trombone' shot is widely overused and rarely achieved correctly. Originally conceived by the master of suspense, Alfred Hitchcock, in his film Vertigo, it was 'stolen' by Steven Spielberg for Jaws. (It is used when Police Chief Brody is sitting on the beach and spots an ominous black fin poking from the water, close to swimming children.) Thereafter, it became known as the 'Spielberg shot'. This was not so much a planned attempt by Spielberg to name a technique after himself, but more due to the success of Jaws and the timing of the effect in the film: everyone talked about it and the movie, which gave birth to the term.

The Mechanics of the Shot

The combined use of a zoom, focus and track, timed perfectly, will produce this effect or optical illusion. Individually, zooming and tracking are difficult enough manoeuvres on their own.

A zoom is where the camera and subject stay still and a special lens 'zooms' into the subject from a distance, effectively closing the gap between the audience and the action without having to physically pick up the camera. The only problem with a zoom is that it looks unnatural, as it relies on the optical capabilities of the camera and lens to produce the illusion of moving closer to a subject, effectively magnifying it. If you watch closely, you'll see the background to the subject of a zoom will not alter perspective, and the relative positions and sizes of anything in the image will remain the same.

Comparatively, a tracking shot is where the camera is moved closer to the subject through the use of a track and dolly. The track is simply that: track - not unlike the rails a train runs on - but more lightweight, portable (in some cases collapsible)1 and can be made from metal or plastic. A dolly is the carriage that runs on such a track, but unlike a passenger train carriage this is a specially designed platform with coasters or wheels on each corner. It also has a seat and mechanism on top, designed to mount and secure a film camera and its operator. There are many types and variations of track and dolly in contemporary filmmaking, but in Hitchcock's days the tracks were usually metal and most mounts were suitable for one or two types of film camera.

The subject was generally situated at the far end of the track, and the director (or sometimes the cinematographer) would sit on the dolly with a camera mounted on it while a number of crew, called grips would push the platform or dolly along the track towards the subject. This had the effect of allowing the audience to move closer to the subject and the camera to make better use of lenses for effect. Unlike a zoom, the perspective of the background did change with a tracking shot, as the camera was physically moved closer to the subject.

The trombone shot is, therefore, a combination of the two techniques above, coupled with the added difficulty of keeping focus.

With the camera mounted on a track and dolly, and the subject stood still, the camera begins to zoom in on the subject as it is pulled backwards on the track, all the while maintaining perfect focus on the subject. At a pre-determined spot the camera stops zooming, the grips stop tracking back and the focus puller stops rotating the focus ring. The difficulty is getting the speeds of the backwards-track and the zoom-in to match enough to create the effect, which is for the background to deepen in perspective (stretch, or drop away) while the subject remains the same size in frame.

The reverse of this - to track in and zoom out - can be just as impressive, drawing the background in and effectively closing the gap between the subject (a character or object) and its background.

There has never been one definitive name given to this effect, and although the 'trombone shot' has become something of an industry title, it has gone under many other guises. Some of them are as follows:

The name 'trombone shot' has its base in the physical motion of a musical trombone as it descends a sliding scale of notes or a glissando – the player pushes the slide outwards – and the descending tone it makes as a player does this and blows into a trombone. If you can imagine the sound and visualise the effect, there you have the basis for the name. If you can't, then go watch Vertigo or Martin Scorsese's Goodfellas.

Alfred Hitchcock used this technique in his film Vertigo to heighten James Stewart's sensation of vertigo by making the drop from the building in the opening sequence seem that bit further - the illusion that the distance between the character and the ground increases or extends - and again, later in the film in the stairwell, to similar effect. The effect next resurfaced (no pun intended) in Steven Spielberg's Jaws, and has since been done to death in countless films, tv shows and commercials.

An apparent quote by Hitchcock himself on the subject of the trombone shot:

I thought about the problem for 15 years. By the time we got to Vertigo, we solved it by using the dolly and zoom simultaneously. I asked how much it would cost, and they told me it would cost $50,000. When I asked why, they said 'Because to put the camera at the top of the stairs we have to have a big apparatus to lift it, counterweight it, and hold it up in space.' I said 'There are no characters in the scene: it's simply a viewpoint. Why can't we make a miniature of the stairway and lay it on its side, then take our shot by pulling away from it? We can use a tracking shot and a zoom flat on the ground.' So that's the way we did it, and it only cost us $19,000.

Even with the advances of film technology the trombone shot is still a very physical one, demanding the use of a variety of grip and camera equipment, as well as a number of hands-on personnel. This means its successful production is very prone to human error and, unless prepared well in advance, can prove a fruitless exercise. The advent of 3D environments has meant it can be reconstructed within the confines of a computer using software such as 3ds Max, Maya and Lightwave, and with Hollywood pumping out more and more 3D animations since Toy Story, be prepared to see it appear again very soon.

It sounds simple, and anyone with a camera and a skateboard or rolling office chair can attempt this shot. If you own these, why not have a try? Just be careful not to fall off your chair or skateboard (or whatever else you're using as a dolly) and always be aware of health and safety... Sit yourself on a high-backed rolling office chair (eg one with coasters on its base or legs), take a video camera with a manual zoom and focus demand2, and focus3 on a subject (a person or object). Ask a friend or work colleague to then drag you backwards in your chair slowly in a straight line, while you attempt to keep the subject the same size in the viewfinder and simultaneously in sharp focus, by using zoom and focus controls respectively. It's best if you can record and watch back the results: while you're concentrating on attempting the shot, you may well miss the effect.

It's often a case of practice makes perfect with this shot. However, the advantages of having a secure track and dolly, several members of crew and a good camera with good lenses become obvious the more you attempt it without them.

1Contemporary track comes in many forms. Some track is portable but needs to be dismantled and stored in bags; others simply 'collapse' on hinges for ease of transportation.2Zoom and focus controls are often referred to as 'demands'. The zoom demand is usually controlled with a rocker attached to a mechanism on the lens that rotates the zoom control according to the direction in which the rocker is pushed. The focus demand is usually controlled directly by rotating the focus ring on the lens.3If you leave your camera on automatic focus while attempting this shot, you'll find your subject will 'float' in and out of focus as you attempt to zoom in while tracking back – most cameras can't compensate for this action, and if set on automatic, constantly attempt to regain focus - hence a 'floating' subject that blurs and focuses in a cyclic sequence.