Czech Beer Content from the guide to life, the universe and everything 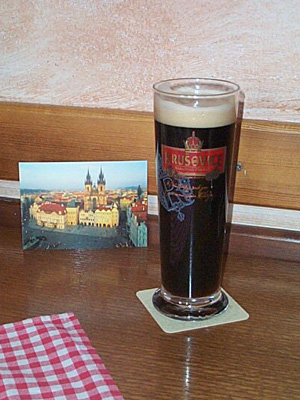 Czech lager is considered by many to be among the best in the world. This is not surprising, given that the Czechs invented lager. It was first produced by the Mestansky Pivovar (Town Brewery) of Pilsen in 1842. At the time, glass had only just become common as the material of choice for drinking vessels, and the beer's golden colour made it far more attractive than the muddy brown of traditional ales. The brewing process was imitated throughout Europe and, eventually, the world.

Czech beer has, for the most part, succeeded in maintaining high quality in the face of commercial pressures and multi-national corporate ownership. The big brewing companies that have acquired some of the classic Czech breweries have been canny enough to make them flagship brands and not compromise quality by massively increasing production (again, for the most part). The Czech Republic has the highest per capita beer consumption in the world.

Before addressing the various brands individually, a quick word about the alcohol content of Czech beer: the Czechs measure it in degrees and not in percentage by volume, as they do in the rest of the world. The two most common types are 10-degree and 12-degree. As a rule of thumb, 10-degree is roughly equal to about 3.8-4.2 percent. 12-degree falls between 4.5-5.0 percent.

Many breweries also produce a dark or 'black' beer. This is not to be confused with ale or stout, it's just very dark lager with a slightly coffee-like aftertaste.

The Czech Republic has no laws governing the opening hours of pubs. The only exception to this is that all pub gardens in residential areas must be shut by 10.00pm (although you are free to continue drinking inside). Left to its own devices, the average Czech hostelry opens around 10.00am and closes around 11.00pm. For those who wish to carry on boozing there are several late-closing pubs and so called 'non-stops'. These range from acceptable to downright scary, though none of them are actually dangerous. Slot machine or 'Herna' bars are usually open late but are best avoided as they tend to be grim, soulless places.

The first1 and probably most famous Czech lager. It has a strong hopsy taste and is slightly darker than most lagers. It is only available in 12-degree and gets you viciously smashed fairly quickly. You will wake up with the overpowering need to shave your tongue.

Also known as Budweiser Budvar. The beer is famous and in almost perpetual litigation over the brand name with the American beer of the same name. Sweeter and lighter than Urquell, it is eminently quaffable and leads to singing, laughing, temporary paralysis of the legs and truly spectacular hangovers. Comes in both 10- and 12-degree, though the 10 is a bit bland and watery.

The most widely available beer in the Czech Republic, Gambrinus is made by the same people who make Urquell and the two taps usually sit next to each other. Although Gambrinus also produce a 12-degree, it's rarely seen on draught to avoid competition with Urquell. Its popularity is based on its price (usually the cheapest beer on tap) and the fact that you can get it almost anywhere. Gambrinus is pleasant enough and you can drink it all day, maintaining a healthy buzz and most of your motor skills.

The most famous Czech beer actually brewed in Prague. It is second only to Gambrinus in its pervasiveness, especially in Prague itself. Of the Czech mass market beers, Staropramen has the least to commend it. It has a slightly bitter aftertaste and is, for want of a better term, a bit dull. However, Staropramen do produce a large variety of beers, and their 'Granat' or 'Velvet' brands are worth a try for a more satisfying and interesting experience.

Named after a Slavic god, the patron of hospitality. He is usually pictured as a well-built gentleman in a skirt, holding a horn goblet that for some reason has a duck sitting in it. But don't let that put you off. Radegast is a fine brew, though the 12-degree is significantly better than the 10. Rarely seen on tap these days, it is well worth seeking out.

This beer may be familiar to those who frequent the Wetherspoons pub chain in the UK; the draught version is far superior to its bottled counterpart. Kozel is another one of the smaller breweries whose product is becoming harder to find on tap. The best option is The Black Ox (U Cerneho Vola) near Prague Castle. The pub is one of the oldest in Prague and is run by the Friends of Beer Party. All profits go to a nearby school for blind children.

There are a lot more beers in the Czech Republic. Most larger towns or regions have their own breweries. Honourable mentions go out to Platan, Bernard, Regent, Herold and Konrad. A dishonourable mention goes to Eggenberg, which is a shame as it's the local brew in the beautiful town of Ceske Krumlov.

While there are many great drinking holes throughout the Czech Republic, the ones on this particular list can be found in Prague. Diacriticals in Czech names have not been included for technical reasons.

U Cerneho Volu (The Black Ox)

This is a classic beer hall, small and usually packed. Get there early, leave when they throw you out. Serves Kozel, but doesn't serve food; inexpensive.

Classic beer hall that's been tarted up for tourists. Often packed with coach tours and the occasional gratuitous oompah band. However, The Bears serves the best pint of Budvar in town and the food is good. Cheap beer, moderately priced food.

This is actually a chain of pub-restaurants that carry the same name. Always packed, modern decor, excellent service and great food. Unfortunately, they serve Staropramen, but you can't have everything; moderately priced.

Great little place with a rock-climbing theme. Even has a climbing wall, which is odd as most patrons have enough trouble just staying on their stools. Serves Staropramen, no food beyond toasted sandwiches, peanuts and crisps; moderately priced.

This refers to a genre of pub rather than any individual establishment. While these places do have actual names, they are far more likely to be known as 'the pub on the corner', 'the green pub' or 'the pub next to the bike shop'. The air is smoky, the toilets are functional, the food is plentiful and safe to eat, the beer is cold, everything is stupidly cheap and no one thinks it odd that the waiter is wearing flip-flops.

1'Urquell' means 'original source' in German.2At the same time, it should be noted the Czechs think that mixing cola and red wine is perfectly acceptable.