'Days of Future Passed' - The Album Content from the guide to life, the universe and everything 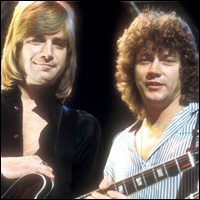 Cold hearted orb that rules the night
Removes the colours from our sight
Red is grey and yellow, white
But we decide which is right
And which is an illusion

Released in the UK in November 1967, and in the US the following April, Days of Future Passed (DoFP) by British pop group The Moody Blues was arguably the first 'concept album' to be produced. It is an amalgam of pop group, orchestra and poetry, and loosely follows a day in the life of an everyday man. From it came a single destined to become an icon of its age: 'Nights in White Satin.'

The Moody Blues line-up at the time of DoFP was Justin Hayward (guitar), John Lodge (bass), Mike Pinder (keyboards), Graeme Edge (drums) and Ray Thomas (flute and percussion). The band started out in Birmingham in 1964 from the remnants of 'Krew Cats', and 'El Riot and the Rebels' (Hayward and Lodge subsequently replaced original Moody Blues members Denny Laine and Clint Warwick). The band's second single, a cover version of the Bessie Banks blues number 'Go Now', reached the top of the UK chart and number 10 in the US.

Following the arrival of Hayward and Lodge, the band started to move away from its blues covers base into more progressive rock. Another significant milestone on the road to DoFP was Mike Pinder's introduction of the Mellotron - a keyboard instrument equipped with a series of pre-recorded lengths of magnetic audio tape, each of which 'played back' when activated by a specific key. The Mellotron was responsible for many of the intriguing sounds to be heard on the album. Prior to being a founder member of the Moody Blues, Pinder had worked for 18 months as a quality controller and tester for the company which manufactured the instrument.

A Day is Born

The origin of the album lay with Deram Records, at the time a new offshoot of the Decca record label for which the Moody Blues were recording artists. Deram wanted a demonstrator disc for its new Deramic SoundSystem technology. This system basically extended the simplistic approach to stereo recording of pop groups that was the standard method of the day, by modelling a bigger sound-stage and adding significant amounts of reverb to the mix. The plan was to produce a group/orchestra version of Dvorak's New World Symphony. The Moody Blues were picked for the task, along with the label's in-house London Festival Orchestra and arranger/composer Peter Knight. The band somehow managed to persuade the label's management to radically alter the plan, allowing them to record their own songs, placed in an orchestral framework.

The Day is divided into a number of sections, with orchestral bridge pieces composed and arranged by Knight:

The orchestral introduction to the album is in the manner of potpourri overture, previewing tunes that will appear later. This is credited to Redwave and Knight, 'Redwave' being a fictitious name for the band. The link to the next section is the first of Edge's poems, Morning Glory. Against shimmering background sounds, he recites the lines that begin with the words quoted at the head of this Entry.

The accompaniment to Pinder's slow-tempo song 'Dawn is a Feeling' is characterised by the sound of the Mellotron.

Time seems to stand quite still
In a child's world, it always will

Not surprisingly, the cheerful, quicker-tempo 'Another Morning', by Thomas, features the flute, frequently double-tracked. The orchestral bridge that follows clearly portrays, in music, working men and women scurrying about as they carry out their daily chores — you can almost hear the typewriters chattering away1.

Minds are subject to what should be done
Problems solved, time cannot be won

Lodge's song 'Peak Hour', for the band alone, is a typical example of the pop psychedelia for which the post-DoFP Moody Blues would become well known. The track closes side one of the album.

The first track on side two is oddly listed as 'Forever Afternoon (Tuesday?)', apparently at the insistence of the producer. However, when it was released as a single in July 1968 (in the US only) it was titled simply 'Tuesday Afternoon' and has been known as such ever since. A Haywood composition, it begins with, and features throughout, a repeated, insistent little electric organ figure2.

Lodge's second track on the album, 'Time to Get Away', also features a repeated figure, this one on piano. It has an unsettled, mantra-like, almost oriental quality to it. After the first two verses and the first chorus, the second half of the song has the boys singing falsetto. The song fades out and another orchestral bridge leads to the concluding part:

The penultimate section of DoFP comprises two tracks: 'The Sunset' and 'Twilight Time'.

Pinder's self-penned solo 'The Sunset' is a slow number backed by drums and percussion, which are joined in the middle break by orchestral strings and flute.

In twilight time, dream with me awhile

Thomas' 'Twilight Time' has a driving, stomp-like rhythm in which all the band participate. The orchestral bridge that follows consists almost entirely of new material not heard elsewhere on the album. This pauses on a held note on the strings that segues into the well-known introduction to the final section of the album:

The 'Night' section of the DoFP is represented by Hayward's big-hit ballad 'Nights in White Satin', featuring both the band and Knight's orchestra. Hayward's plaintive delivery of the lyrics somehow epitomises the late mid-1960s. After its big climax towards the end, the orchestra's pace slows as it runs down to its inevitable cadence.

The album ends with Edge's second poem, Late Lament. It is introduced, as was the first poem, by shimmering sounds reminiscent of a celesta3. Its final stanza is the same as that with which the album began: 'Cold hearted orb that rules the night...' The final orchestral coda is followed by a gong cymbal stroke, J Arthur Rank-style, that echoes on until it fades into silence.

The album reached only a moderate number 27 in the UK charts, and was not successful in the US until its re-release in 1972, when it climbed to number three. 'Nights in White Satin' was released as a single at the same time as the album, November 1967, and climbed to number 19 in the UK chart. It has entered the UK chart three times: first in 1967, then in 1972 (number nine in the UK) and again in 1979 (number 14 in the UK). 'Tuesday Afternoon' was released as a single in the US, reaching number 24.

Two other concept albums from The Moody Blues followed on the Deram label: In Search of the Lost Chord (1968) and On the Threshold of a Dream (1969). Although both were commercially successful, reaching number five and number one in the album charts, respectively, neither has quite achieved the cult status of DoFP.

1An undoubted salute to US composer Leroy Anderson's tune 'The Typewriter', which featured regularly in radio shows of the 1950s and early 1960s.2A musical term meaning a short fragment of a melody, often only three or four notes. It usually recurs in the piece of music, but in this case it is repeated back-to-back. It is also known as a motif. It does not have to be repeated exactly - for example, it may recur at a higher or lower pitch in the scale - and it can also be a rhythmic figure rather than a melodic one.3The celesta or celeste is a musical instrument that has a set of tuned steel plates which are struck by hammers controlled by a keyboard, producing a sound like tiny bells. Its most famous number is the 'Dance of the Sugar Plum Fairy'.