Thomas Hardy - author Content from the guide to life, the universe and everything 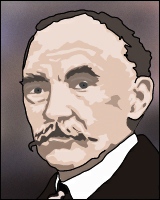 Born on 1 June, 1840 in a cottage in Higher Bockhampton, Dorset, Thomas Hardy did not start life destined for the world of literature. His father was an mason and his mother encouraged the young Hardy's appetite for education. His physical health was very frail and it was not until he was eight that he started in the village school, before transferring to a school in Dorchester.

It was at the age of 16 that Hardy had his first breakthrough into the world of architecture. His father was a master builder, and over a period of helping his father with the designs for the restoration of Woodsford Castle, Hardy impressed fellow architect and castle owner John Hicks so much that he became his apprentice.

After six years as an apprentice, Hardy moved to London to work under Arthur Blomfield, another well-known architect. However, Hardy's frail physicality did not agree with the industrial environment of the city, and he soon returned to Dorset. It was also during this time that Hardy made several unsuccessful attempts to publish some poems that he had written.

Though Hardy's early work did not attract the interest of the public, it was Under the Greenwood Tree (1872) that first brought him to attention as an author. His novels were set around the Dorset countryside of Hardy's own experiences, examples being A Pair of Blue Eyes (1873), Far From the Madding Crowd (1874) and The Return of the Native (1878). He was often given commissions for serialising his novels, the majority beginning as serialisations before being printed as books.

Another of Hardy's trademarks is that he often characterised his heroines as bold, intelligent but tragic personalities, faced with a fate that they find that they cannot change (or cannot see any way to change). It was his explicit way of attacking the prim and proper Victorian morals in his famous work Tess of the D'Urbervilles (1891) which caused a scandal due to the way sexual conduct was dramatised. Jude the Obscure (1895) was another novel that sparked controversy, attacking as it did the institution of marriage. It was often read with the cover wrapped in brown paper, and the Bishop of Wakefield burned his own copy. The book also caused a rift in Hardy's marriage.

The adverse reaction by the public (though it did not affect the booming sales) stopped Hardy from writing fiction, and he returned to his literary roots as a poet. Wessex Poems and Other Verses (1898) was a collection of poetry that Hardy had written. Similar to his novels, the set of fifty-one poems were all set against the bleak Dorset landscape, a metaphor for the changing countryside that was becoming industrialised. Hardy was awarded the Order of Merit in 1910, and the architect-turned-littérateur was now recognised as the leading literary figure of the time. The death of his wife Emma Gifford in 1912 sparked some of Hardy's best love poetry, despite their growing rift.

In 1914, Hardy remarried, this time to old friend Florence Dugdale. His death on 11 January, 1928 saw his ashes buried in Poets' Corner in Westminster Abbey and his heart with Emma's grave in Stinsford, Dorset.