Randall and Hopkirk (Deceased) - The TV Series Content from the guide to life, the universe and everything 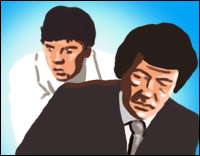 'Only I can see you Marty, and I sometimes wonder why!'
- Jeff Randall to Marty Hopkirk, episode 13, 'What a Sweet Little Room'

There's something different about this pair of private eyes, one of them's dead!

Prolific writer Dennis Spooner had already worked on shows such as Doctor Who and The Saint and created The Champions when in 1969 he created one of his most humorous series, Randall and Hopkirk (Deceased), which aired in the US under the rather more pedestrian title My Partner the Ghost. The basic premise of the series was simple - Jeff Randall and Marty Hopkirk are not-terribly-successful private detectives. Marty is married to Jeannie, who works as the firm's secretary. While working on a simple case, Marty is involved in a hit-and-run accident and killed. Following the funeral, Marty's ghost telephones and then appears to a startled Jeff, to tell Jeff that his death wasn't an accident - he was murdered! Jeff sets out to bring the killers to justice, and Marty is forced to appear in daylight in order to save his mortal friend's life. Upon attempting to return to the grave, his discovers that he has been banished for 100 years - now Marty is stuck on Earth, with only Jeff for company.

'Allo, Jeff. He's standing behind the door, with a bottle.'

The format for the show was thus established - Marty could not return to the grave, only Jeff could see him, and with nothing else to do, Marty continued working with Jeff on detective cases. His ghostly status was signalled by his white suit, indeed all the other ghosts which appeared in the series (for example in the episode Murder Ain't What It Used To Be!) would also appear dressed in white versions of their usual clothes. Be it finding missing persons, unveiling cheating husbands or tackling more serious crimes that the police refused to help with, Marty's skills and invisible nature could always come in handy. He could walk through doors to find what was on the other side, and he was undoubtedly the best shadower in the business. He had limited control over his environment, but could blow things around, and had some degree of telekinesis - for instance, the ability operate a typewriter. As back-up, however, he was useless. Much of the humour in the series would come from Jeff being locked up, and Marty trying to find someone he could communicate with to get him released. The majority of the laughs, however, would come when Jeff was trying to hold two conversations - one with Marty, and one with someone else who couldn't see him. Marty could be particularly good at turning up when Jeff was 'entertaining', leading him to apparently tell at least one pretty woman to 'get lost.'

The series only ran for one series of 26 episodes, from 1969 - 1970. In the USA in particular, it was felt the series' attitude to death was too light-hearted. While this attitude may seem bizarre in the aftermath of shows like Dead Like Me and even Rentaghost, for its time the series was quite radical in its depiction of death and ghosts.

Smokin', drinkin', womanisin' Jeff Randall was played by Mike Pratt, who at 37 was a little older than the average ITC star - the company tended to favour good-looking men in their twenties, rather than a grizzled man approaching 40. He had previously guested in a number of ITC shows, including Danger Man, The Baron and The Saint. He was perfect for the part however, constantly exasperated with Marty messing up his social life, and aware that his business was a failure. A fresh-faced young man just wouldn't have cut it in the role of world-weary Randall. Sadly, Pratt died of lung cancer on 10 July, 1976.

Kenneth Cope was 35 when he took the part of Marty Hopkirk, and had previously been a regular in Coronation Street, playing Jed Stone. He would later become a regular in Channel 4 soap opera Brookside. In common with half of Equity1, he has also guested in Doctor Who. At 30, Annette Andre was the youngest of the regular cast. Prior to the show she had also guested in The Saint, and she would meet one-time James Bond Roger Moore again after the series, when she appeared in The Persuaders.

'Hang on, this is getting a bit surreal'

In 2000 a new version of the series, starring comedians Vic Reeves and Bob Mortimer was aired. The new series was partly written by Charlie Higson, who had previously written for The Fast Show and Harry Enfield's Television Programme, as well as producing for Reeves and Mortimer. The show ran for two seasons of six and seven episodes.

There were a number of changes for the new show: The humour was now much more pronounced, and a new character was introduced, spirit guide Wyvern, in the shape of ex-timelord (and Little Britain voiceover maestro) Tom Baker. Jeannie was played by Emilia Fox, and in this version she was Jeannie Hurst, having been engaged to Marty, but never married. The fact that Jeannie and Marty never married led to a sexual chemistry developing between Jeff and Jeannie, something that had been almost entirely absent from the original.