A Brief History of the UK Free Party Movement Content from the guide to life, the universe and everything 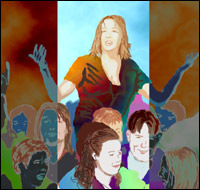 The expression 'freedom to party' is nothing new; you only need to cast an eye back to 1960s and 1970s Britain, when festivals at Glastonbury, Stonehenge and on the Isle of Wight heralded a new wave of large-scale anti-establishment entertainment. However, the UK's free party movement - which has evolved since the mid-1980s - has become a sub-culture synonymous with both freedom of expression and musical evolution.

Birth of a New Scene

The free party ethos brought together the anarchy of punk, hippy communal ideals and forward-looking music; however, few would contest that the drug Ecstasy was a major catalyst for what quickly grew into a strong social movement. Ecstasy (MDMA being the active compound) was first introduced to the UK in the mid-1980s; its use soon became endemic in the UK's nightclub circuit and, fuelled by this new social lubricant1, huge parties began to take place outdoors and in unlicensed premises, often attracting many thousands of revellers at a time. The term 'Rave' was born.

While certain minority factions set out to capitalise on the popularity of popping pills and dancing to dawn, the thrust of this cultural phenomenon came from the free party sound systems2 and their members who created a global network of dedicated party-makers inspired by the freshness of music and the mass unification of different 'tribes'. This spawned a multicultural melting pot of people dancing to the same beat, all adhering to the well-documented acronym PLUR: peace, love, unity and respect. Along with the 'free' entry tag3, the free party ethos was also based around personal freedom of expression - something largely inconceivable within the rigid confines of high street establishments. In inner-city areas such as London, warehouses were often squatted in preparation for events (this made setting up and securing the party possible, as squatting laws provided loopholes for avoiding police intervention - more on this later), while outside of the cities parties often took place in idyllic countryside locations.

Although at the time they were the crew to receive the most public attention and recognition for their free party activities, the faceless collective known as Spiral Tribe were shrouded in mystery (in fact, they still are today). The group spearheaded the movement in the early 1990s, with their mantra emblazoned on their music recordings: 'free party, free people, free future'. Following the infamous Castlemorten festival (see below), for which they admitted accountability, the Tribe were 'run out of town' by the authorities, with many members relocating abroad and mutating into what became known as Network 23.

Spiral Tribe were just one piece of the chaotic jigsaw. At the same time Nottingham's DiY collective were running huge outdoor parties in the Nottingham and Derbyshire countryside, with their policy of playing house music providing a contrasting angle to the militant techno stance of Spiral Tribe. Other pioneers at the time included London's Bedlam and Liberator crews, Luton's Exodus and Scotland's Desert Storm. Desert Storm, who created nodes of resistance in Glasgow, Manchester and Nottingham, became well-known in the underground media, having taken their sound system - along with aid - to war-torn Bosnia. The Exodus collective, formed in Luton in 1992, encapsulated the community ethos of the scene directly by not only putting on massive free parties locally but also kick-starting social initiatives in the area, such as shelter for the homeless and community farming projects.

In May 1992 a week-long free festival at Castlemorten in Worcestershire became a pivotal point in the history of the free party movement. Later to be dubbed the first ever 'Teknival'4, 25,000 people partied at the foot of the Malvern Hills, hitting the headlines and driving the whole counterculture into the consciousness of the populace. The ramifications of the gathering soon became apparent: responding to complaints from residents and landowners both in the Castlemorten area and other places that had played host to similar events, the government passed legislative action in the form of the 1994 Criminal Justice Act (CJA).

Civil liberties groups were outraged as the bill was being passed - legislation that not only outlawed the practise of throwing free parties with modern, amplified music, but also severely quashed the rights of travellers and squatters. The act made history by effectively banning unlicensed public amplification of music 'wholly or predominantly characterised by the emission of a succession of repetitive beats', with sections 63-65 giving police powers to break up small gatherings of people they believed to be preparing for, waiting for or attending a rave.

Clearly, on civil liberties grounds, it is laughable to argue that the right of people 'to party' has precedence over the right of others 'to sleep' (or to live without the littering or other antisocial behaviour of others)5. Concerns from civil liberties groups were borne of the wider picture; although the CJA was pushed through largely to outlaw the practice of 'raves', clauses within the paper could be applied in such ways that many believed the legislation would powerfully erode the rights of protestors, proactive movements and vulnerable members of society (ie, those living in vehicles or squatted accommodation). Indeed, it was the vast sphere of possible application that raised concern - for example, if Section 63 of the CJA is taken to its logical conclusion, police have the power to close down a church picnic if there is amplified 'beat' music playing!6

Post implementation of the CJA, sound system culture spread like wildfire to the continent, with many pioneering party crews uprooting to Europe. In Britain the scene was driven deeper underground, as debatably heavy-handed tactics and the adoption of 'zero tolerance' policies from the police and authorities made putting on a party more difficult. Subsequently, many sound system members took to putting on events in nightclubs, raves crossed right over into the mainstream and the term 'raver' was surreptitiously replaced by 'clubber' (thanks to the commercially-led media). Festivals like Glastonbury - once strongholds of counterculture, and a significant factor in the party scene's evolution - became sanitised by the intervention of the media and corporate entities. For party-goers different vices of choice came to the fore, with the sociable drug angle of E7 taking a back seat to cocaine, ketamine, crack, heroine and hardcore alcohol abuse (by the mid-to-late-1990s Ecstasy tablets were believed to be widely adulterated with other drugs). The emphasis was often taken away from the music; inner city free parties were becoming hotspots for vandalism and theft; in London the vibe was darkened by drug gangs, violence, bandwagon jumpers (charging inflated entry prices for personal gain) and, going against the original ethos, a general lack of unity and respect. A scene defined through breaking down the stereotype became bogged-down in inverse snobbery ('hey, you, with your nice new trainers') and elitism.

However, a strong global network of sound system collectives still exists: committed individuals who go against the law most weekends, raising a two-fingered salute to the hungry 'dance music' machine of the music industry. Following the fallout of the 1990s, many party crews and musical acts went on to achieve notable success in commercial music circles - Smokescreen and DiY for example, now produce top-selling house music for labels across the globe, while Eat Static and Orbital have commanded huge influence in contemporary electronic music circles. Of course, other key members of the free party revolution continue to shun the commodification of music and culture, remaining deep underground and furthering the legacy with music and art that will always be years ahead of its commercial counterparts.

1This Entry is in no way intended to encourage drug use, yet it does acknowledge that there are often links between new recreational drugs and evolving youth trends.2For which imported Jamaican sound system culture provided much inspiration.3Although organisers would often ask for donations or charge a nominal entry fee to cover sound equipment, visuals and petrol.4Literally a 'techno festival' - a term soon to spread to the continent.5Within free party culture, organising events with blatant disregard to the peace of local residents is frowned upon, as is causing damage or leaving litter; they are basic unwritten rules.6Although this is somewhat unlikely.7Ecstasy produces a feeling of euphoria, which can in the short-term enhanced friendliness.