George Best - The Tributes Content from the guide to life, the universe and everything 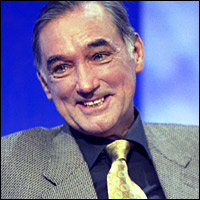 Many tributes have been made to the late footballing legend from Belfast, George Best. One suggestion was to erect a statue of him outside Belfast City Hall, though this has as yet to be made official. There have also been many personal tributes from fans, such as this video tribute, and murals which have been painted across Belfast.

This Entry outlines some of the more ambitious tributes to the man who has been described as the greatest footballer in the world1.

It was decided to rename Belfast City Airport after Best, and many suggestions were made as to exactly what the new name should be. One suggestion, jokingly made by snooker player Alex Higgins, was to simply take away the letters L, F and A from the word 'Belfast', thus changing the name to 'Best City Airport'. This idea was later dropped.

The Best family were involved in every stage of the airport's renaming and George's sister, Barbara, said that they were delighted with what was being done.

The new name - George Best Belfast City Airport - was kept secret until the special unveiling ceremony attended by George's family and friends. The ceremony took place on 22 May, 2006, specially chosen as it would have been Best's 60th birthday. Those present included Martin O'Neill and Pat Jennings, former Northern Ireland international players, and the boxer Chris Eubank. The signage was specially created to match Best's handwriting.

Brian Ambrose, chief executive of the airport, said, 'We believe that renaming the airport after George is a fitting and permanent tribute to his footballing brilliance.'

Inside the airport, a permanent tribute was set up, which allows for people to donate to the George Best Foundation. Professor Roger Williams, Best's consultant during the last stages of his illness, said that this was 'a fitting tribute for someone who did great things for Northern Ireland.'

Don Fardon is a country and western singer from Warwickshire and used to be a presenter with BBC Radio Coventry and Warwickshire. He wrote the song as a tribute to Best during the height of his footballing fame. It was also used as the theme song for a BBC documentary made about the footballer in 1970.

The song had more than 200 airplays in the days following Best's death. Fardon recorded a re-mix of the song in UB40's Birmingham studios on the Monday night after he died. He said that while the lyrics were the same, he made it into 'a 2005 version rather than a version for the 1970s'.

The song is available for download from The George Best Appeal. All donations go to The Foundation For Liver Research.

The Ulster Bank, a major bank in Northern Ireland, produced one million special edition five pound notes, complete with special commemorative wallets to keep them in. These are the first commemorative notes that the Ulster Bank has commissioned, and the denomination was chosen to make them as accessible as possible to fans. The notes were issued to coincide with the first anniversary of Best's death, and show him wearing both his Northern Ireland strip and his Manchester United strip.

Best's father, Dickie, and sister, Barbara, were present when the artwork for the notes was unveiled at Ulster Bank HQ by the chief executive, Cormac McCarthy. Mr McCarthy said, 'At the outset of this project we wanted to ensure that, in celebrating the life of this legendary footballer, we paid fitting tribute to his contribution to football in Northern Ireland and beyond. We wanted to make it possible for fans throughout Northern Ireland and further afield to own their very own piece of unique George Best memorabilia.'

People could apply to buy the notes from 13 November, 2006. It was then possible to buy notes directly from branches a fortnight later. However, the notes were in popular demand and quickly sold out. They have been known to sell on Internet auction sites for twice their face value.

The bank also donated money to the George Best Foundation to support the Foundation's promotion of cross-community football schemes.

Flybe, George Best Belfast City Airport's biggest airline, named one of their aircraft after the football legend. The plane, a Bombardier Dash 8 Q400, G-JECL craft, will fly between Belfast and Manchester and bears a picture of Best in his Man U strip.

His sister Barbara said, 'You can now fly on the George Best aeroplane into the George Best airport - what more could you ask for?' Unfortunately, this aircraft does not fly the route on a regular basis, and does not often fly into Belfast.

A mural of Best replaced a paramilitary one in the Cregagh Estate. It shows him in his Northern Ireland strip and overlooks the area he played in as a boy. It was unveiled as part of a celebration of his life that was held in the estate.

1By none other than Pelé himself.