The Weimaraner Dog Content from the guide to life, the universe and everything 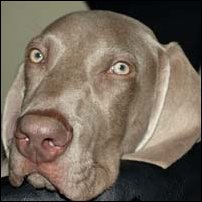 The Weimaraner1 is a very distinctive-looking medium-sized dog. It comes under the category of gun dogs - more specifically the HPR or Hunt Point Retrieve group. Other dogs in this category are Labrador Retrievers, Pointers and Setters, and Springer Spaniels.

They were bred originally in Germany, hence the name, as the Duke of Weimar is credited with creating the breed as it is known today. The breed was officially recognised in 1896. The dogs were introduced to the United States in the 1930s, but did not make it to the UK until 1952, and their first appearance at Crufts dog show was in 1953.

The Weimaraner has a very striking appearance, and it will attract attention wherever it goes. The overall bearing should be aristocratic and gentlemanly, and the animal should look sleek and athletic. Specific features include:

They have a very friendly disposition, and while they make good watchdogs, a well socialised animal will readily greet strangers with much tail-wagging and bouncing. As they require a lot of work and attention, they make a good pet for a family with an active lifestyle. They are not ideal with very small children simply because they can be so boisterous. They can tolerate other animals and pets if they have been introduced to them at an early age. They are very active and need at least an hour's exercise a day, much of that off leash. The truism among owners is 'A tired Weimaraner is a good Weimaraner!' They have great stamina and will keep going as long as the owner can. They excel at agility events and activities like flyball2. Gun dogs as a group are very intelligent, and while some would offer the opinion that the Weimaraner is the dumbest of this group, that's still a very smart dog. As it is a big dog, some obedience training is vital if the dog is not to become impossible to handle, or a nuisance to others. They can be quite challenging to train, largely because of their low boredom threshold. They can be extremely destructive if left alone for long periods. The main behavioural problems are separation anxiety, and agressiveness.

They have a keen sense of smell, which can often lead them astray and cause them to forget what they were supposed to be doing! They are very adept at sneaking food from the table or your hand.

The short coat is easy to groom, and only needs a rub down with a rubber grooming mitt once a week. Bathing is not necessary unless they have got very dirty. Ears should be checked, as long ears can be prone to infection - check for any excessive itching of the ears, or an unpleasant smell. Clean the inner side of the ear gently with a gauze pad, but do not probe too deeply into the ear canal. Nails will usually be worn down if the dog is walked sufficiently on hard surfaces, otherwise they will need trimming when they get too long. Teeth should be checked regularly and brushed with a special doggy toothbrush.

In general, they are a healthy breed, but owners should be aware of a couple of conditions in particular. As they are a deep-chested dog, they can be prone to bloat (gastric torsion). A sensible diet, fed twice a day, and avoiding vigorous exercise immediately after feeding may help prevent this condition. The dogs' large size can lead to a tendency to hip dysplasia (HD). This results in abnormal wear of the joint, leading to lameness and pain. There is a genetic link in the development of HD, so choosing from a breeder who X-rays their stock and gets OFA, ABVRA or PennHip ratings is advisable. A low score is indicative of well-formed hips. The lifespan of the Weimaraner is usually 10 - 12 years.

Famous Weimaraners include the piano-playing dog in the Smirnoff vodka advert, the hounds of love on Kate Bush's eponymous album, and the dog in the video of Blue Monday by New Order.

Golfer and commentator Peter Alliss, 34th US President Dwight D Eisenhower, actress Grace Kelly, 'King of the Cowboys' Roy Rogers, former French President Giscard d'Estaing, actor Brad Pitt, Nine Inch Nails front man Trent Reznor, and the first president of Turkey, Mustafa Kemal Ataturk, have all owned Weimaraners. Special mention must be made of photographer William Wegman, whose dogs Man Ray and Fay Ray were the subject of much of his work, including their appearances on Sesame Street.

1Pronounced VY-mur-ann-ur2Flyball is a sport played by teams of four dogs, who race against each other relay style. Dog 1 runs over a course of four hurdles, catches a tennis ball released from a spring pad, before returning back over the hurdles with the ball. Dog 2 can then do the same. The fastest team to get all four dogs there and back, complete with balls, wins.