Bill Oddie, OBE - Comedian and Naturalist Content from the guide to life, the universe and everything 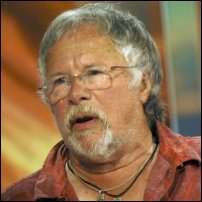 Oddie is 65 now but, apart from the whitey-grey hair, little has changed from his Goodie days - he is small, portly, bearded, earthy. He wears his salmon-coloured shirt loud and loose, his trousers rolled like a scruffy Prufrock, and his slippers defiantly.
- The Guardian

Bill Oddie OBE1 is a well known television presenter, actor, songwriter, author and twitcher2. Many people remember him for his appearance in The Goodies, but more recently he has become more recognisable as a wildlife presenter and for his work as a conservationist.

Born William Edgar Oddie, on 7 July, 1941, in Rochdale, Lancashire he was the only surviving child of Lilian and Harry Oddie. His mother had a stillborn baby and another that died just months after being born, prior to Oddie's birth. When the family moved to Birmingham she became ill and was put into a psychiatric hospital under section four of the Mental Health Act leaving Oddie's grandmother and father to care for him.

Statistics show that a lot of depressives have mother deprivation on quite a grand scale. The other thing this guy said is that you tend to find there are dead babies involved somewhere, and I said, 'God, you're being a bit sensationalist aren't you?
- Bill Oddie

As a result of Oddie's mother being institutionalised when he was young, he grew up feeling abandoned by her. To add to this his marriage to Jean Hart broke up, with whom he had two daughters Kate3 and Bonnie, leaving Oddie to feel that women were not to be trusted. However, he fell in love with Laura Beaumont and his view of women changed. The couple married and together had a child called Rosie. Like her father, Rosie is passionate about music and has even won first prize in an all-female global singer/songwriting contest.

However, not everything has been rosy in her life as she has seen her father suffer from bouts of depression. After his first bout of depression he saw a therapist who questioned Oddie about his childhood and his relationship with his mother. This pushed him towards researching his family tree for the BBC's programme Who Do You Think You Are? and resulted in him un-demonising his mother.

Oddie attended Lapal Primary School, Halesowen Grammar School, and King Edward's School, Birmingham, and in 1961 began to read English Literature at Pembroke College, Cambridge where he gained an MA. At Cambridge University he joined the Cambridge Footlights where he met Tim Brooke-Taylor, Graeme Garden, John Cleese and Graham Chapman. Together, they worked on The Footlights revue of 1963, A Clump of Plinths, which enabled Oddie to demonstrate his talent for writing musical scores. A Clump of Plinths was later renamed Cambridge Circus and appeared in the west end of London, toured New Zealand and was seen on Broadway.

All of us, I think, needed to be in a group. Even John Cleese. But Bill, I think, would have been the one person who could have made it under his own steam. He was always interested in the showbiz side. He wasn't ambitious like David Frost - who had an agent when he was a student - but he definitely looked at entertainment as a career.
- Graeme Garden

On graduating from Cambridge University, Oddie, Brooke-Taylor, Garden and Cleese worked together on the radio show I'm Sorry, I'll Read That Again and Oddie continued his talent for writing music by creating songs for I'm Sorry, I Haven't A Clue, which were released as singles and later put on an album entitled Distinctly Oddie. His talent for songwriting was developed further when he was asked to write and sing for That Was The Week That Was and BBC Radio 3. He also took acting roles in At Last the 1948 Show for ITV and Twice a Fortnight for the BBC and co-wrote with Garden scripts for Doctor in The House. Oddie also donated his song-writing skills to Brooke-Taylor and Garden's sketch show Broaden Your Mind, which lay the foundations for the comedy series The Goodies. The series ran from 1970 to 1982 and won two Silver Roses of Montreux and an Emmy nomination. During the series a number of songs were played in the background to the sketches such as, 'Black Pudding Bertha', 'The Funky Gibbon' and 'The Inbetweenies'. Eventually, these songs appeared on the music programme Top of the Pops.

When The Goodies came to an end the trio worked together again, this time they provided voices for the cartoon characters featured in Bananaman, with Oddie providing the voice for Crow and Chief O'Reilly. He furthered his acting career in children's TV by appearing in Tickle on the Tum during 1984 to 1988 and also took on roles in From the Top and The Bubblegum Brigade, which he co-wrote with his second wife. Additionally, Oddie has also entertained people by appearing in rock concerts, pantomimes, a one-man show entitled Follow That Bird and playing Koko in the English National Opera's version of The Mikado. Oddie has also appeared on the BBC radio and Jazz FM.

Having worked on a number of programmes featuring comedy, Oddie decided to share his hobby of birdwatching with the nation. The programmes on which he worked are: Bill Oddie Goes Wild, Britain Goes Wild, Birding with Bill Oddie, Bird in the Nest, Oddie in Paradise, The Great Kenyan Bird Safari, Favourite Walks, Wild Weekends, The Bird Business, Flight to Eilat and The Big Bird Race. These ornithological programmes made way for How to Watch Wildlife, Springwatch and Autumnwatch, which feature other animals such as the shrew, badger and deer, alongside birds.

Not content in just producing programmes on wildlife, Oddie has taken to writing books on birds such as Bill Oddie's Little Black Bird Book, Gone Birding and Birdwatching with Bill Oddie, many of which are accompanied with his own illustrations. The magazines BBC Wildlife, Country Life and Signature have also featured Oddie's written work as have the specialist publications British Birds, Birdwatching Magazine and Birdwatch.

Oddie also supports wildlife organisations such as BirdLife International, World Wildlife Fund, Fauna and Flora International, Friends of the Earth and the British Trust for Conservation Volunteers. He has also worked with the RSPB, the Wildfowl and Wetlands Trust and the Ornithological Society of the Middle East.

1Oddie received his OBE for services to wildlife conservation on 16 October, 2003.2'Twitcher' is a name given to someone who watches birds.3Kate's stage name is Kate Hardie.