The Woking Martian Content from the guide to life, the universe and everything 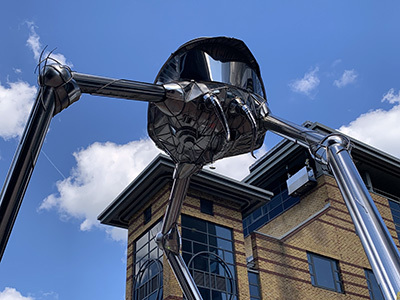 No one would have believed in the last years of the 20th Century that the inhabitants of Woking, UK would be watched keenly and closely by intelligences greater than their own ...

It was exactly 100 years since a writer from the town, HG Wells, had published a novel which forged our imaginations and expectations of extraterrestrial life. The story describes how, just to the north of Woking, on Horsell Common, a vast fireball projected from Mars crashes forming a massive crater, flinging sandy earth over a mile away, and setting part of the heath ablaze. After the cylinder-shaped projectile has cooled, a lid unscrews, and grey, tentacled creatures emerge, before frying the crowd of onlookers with a heat-ray. They then construct their war machines, each 'a monstrous tripod ... a walking engine of glittering metal ... tentacles swinging and rattling about its strange body', before setting out to destroy mankind.

Like the Martians it describes, The War of the Worlds took the Earth by storm, its theme echoing both British colonialism and the perceived threat of German militarisation at that time.

On Sunday, 30 October, 1938, Orson Welles updated and adapted the story into a radio play, and inflicted it on an unsuspecting American public with disturbing results. Many had tuned in after the introduction, and believed that the flaming meteorite crashing at Grover's Mill, near Princeton, New Jersey was indeed real. A grave announcement made with a passable impression of Franklin D Roosevelt only served to turn confusion into widespread panic, as thousands fled their homes. Some fashioned gas masks, while others rushed into churches to pray. On being told it was a hoax, many took it with the expected level of good spirit - they filed lawsuits.

Two movies have followed: George Pal and Byron Haskins adapted the radio play version to the big screen in 1953, winning an Academy Award for its special effects. Stephen Spielberg has since brought the story into its third century, in 2005, with his War of the Worlds blockbuster starring Tom Cruise.

One further adaptation deserves mention: Jeff Wayne's dramatic 1978 rock album War of the Worlds, featuring Richard Burton, Justin Hayward and David Essex, brought the story to a completely new audience, and has sold in excess of 14 million copies worldwide. A musical version went on tour in the UK, Australia and New Zealand in 2006.

And so in 1996 the expanding Surrey town of Woking, keen to cash in on the 'birthplace of modern science fiction' tag, marked the publication's centenary with a programme of events, topped by a major art installation. An open competition was won by young British artist Michael Condron, with his stunning Martian Walking Engine. The 7-metre-tall chrome-plated sculpture was installed in 1998, and the opening celebration1 included a live radio broadcast of a contemporary play, performed by a local dramatic society.

The Martian's town-centre location challenges the viewer in a number of ways. Although it is dominated by the surrounding plate-glass offices, the machine's gangly stride and focused glare have lost none of their menace. You feel strangely drawn towards it, as were those ill-fated onlookers at Horsell Common.

Condron's installation includes themed brick landscaping to one side. A crashed cylindrical pod juts out of the pavement, and curved containers were originally planted with the grass Ophiopogon planiscapus 'Nigrescens' - a substitute for the Martian 'red weed'. Also commemorated are the creatures which caused the Martians' downfall: bacteria. Eleven differently designed microbial slabs are scattered in the vicinity, one of which, seemingly broken by a Martian footstep, has started to 'infect' one of the legs.

Wells's story is, of course, a tale of humanity. The Martians were no worse than any of a number of human aggressors who have plagued our history both before and since the novel's publication. We may never learn to eradicate war, but the Woking Martian serves to remind us of our helplessness in the face of it.

1The opening ceremony was performed by Carol Vorderman. The audience gasped to see this long-legged, large-eyed, hyper-intelligent creature, who then proceeded to unveil the Martian.