Dave Allen - Comedian Content from the guide to life, the universe and everything 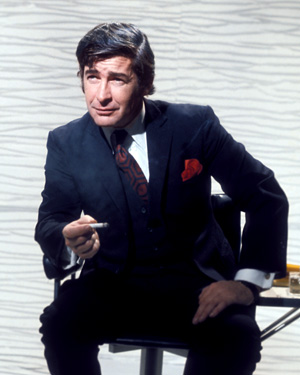 For many people, none of the innovations in comedy style and presentation over the years compete with watching Dave Allen, a classic stand-up comedian getting by with little more than a one-legged stool, a dashing silken suit, whisky tumbler in one hand and a cigarette nonchalantly held in the other. This manner of presentation is timeless and enduring.

Dave Allen was born David Tynan O'Mahony in Dublin, Ireland in July, 1936. He was the son of a prominent local journalist. At the age of 19, he was struck with the desire to become an entertainer. For the next four years, he learned the trade by touring extensively with various theatre ensembles; he learned both the dramatic and comedic acting disciplines. Gradually he became an all-round entertainer, able to work in such varied environments as theatres, night-clubs, vaudeville and workingmen's clubs.

In 1959 he felt confident enough to take his first shot at television on the BBC production of New Faces. He later remembered it as 'the longest and most terrifying three minutes of my life'. He continued to ply his stand-up comedic trade for the next four years; during which time the rise of 'Packaged Tours' became prominent feature on the entertainment map. They generally had a mix of established and up-and-coming entertainers, across the spectrum of rock 'n' roll, easy listening music and stand-up comedians. One such promising act was The Beatles, whom Dave had the good fortune to tour with in Britain and France.

Things changed dramatically when, during a 1963 tour of Australia, Dave got his first big break in television with his own show entitled Tonight With Dave Allen. Initially it was to be an eight-week run; but due to the show's popularity, it was subsequently turned into a 18 month engagement.

At the end of 1964, he returned to England hoping to make his mark. Within a month he had appeared on the popular ATV television show Sunday Night at the Palladium, yet again along side The Beatles. Within a year he was offered the chance to do his own show on the BBC.

The British version of Tonight With Dave Allen premiered in 1968. It quickly gathered an audience, like its down under forerunner, with its engaging, witty and informative style; although, its primary attraction was probably the various stunts Dave performed...people tuned in to see whether anything would go wrong.

In the middle of 1969, he attempted to expand his horizons by focusing on documentary films. During a nine-week shoot in the United States, he explored some of the social changes happening in turbulent America.

In 1971, all of his efforts were rewarded with the BBC 2 show Dave Allen at Large. With its abundance of straight to camera monologues and short comedy sketches, it became one of the highest-rated programmes during the next seven years. Controversy was courted however with the abundance of sharp religious satire.

In 1972, safe in the knowledge that his show was a hit, he resumed his interest in dramatic acting. His West End debut was an appearance in the Royal Court's production of Edna O'Briens play A Pagan Place. This was followed up in the next season by a role opposite Maggie Smith in a production of Peter Pan, playing both Mr Darling and Captain Hook.

During the next few years, with the popularity of his show rising, he some time to tour his stand-up routine around the globe. He appeared at the opening extravaganza for the Sydney Opera House in 1974; he filmed a further documentary on great eccentrics; and he released a book entitled A Little Light Reading1, an anthology of horror and supernatural stories. In 1975, he made an appearance in a dramatic one-man show, again at the Royal Court Theatre, from which the proceeds went to repairing the theatre's roof. He recorded an insert for the Salute to Lew Grade special, starring alongside such luminaries as Peter Sellers, Julie Andrews and John Lennon. Later, he found time to complete two more documentary series dealing with British pagan myths and folklore; and in America he produced a series of 14 programmes exploring some of the unusual aspects of their way of life.

As his television show began to lose its impetus towards the end of the 1970s, he returned to live stand-up comedy with successful tours of Britain, Australia and New Zealand. He got the opportunity in 1978 to do an Alan Bennet dramatic play for television. In May of 1981, a new challenge arose, when he was given the opportunity to do a two week engagement at the Wilbur Theatre in Boston; unfortunately, translating his humour for the American market presented a considerable challenge. The sacrilegious tone of many of his routines limited its appeal to the American audience.

Dave enjoyed semi-retirement from the rigours of showbusiness, occasionally guesting on shows such as Clive James. Health scares forced him to give up both his cigarettes and excess alcohol; which given the relish he showed for them in the 1970s, must have been quite a challenge. He died in his sleep on 11 March, 2005, aged 68.