Hypochondria (aka Hypochondriasis) Content from the guide to life, the universe and everything 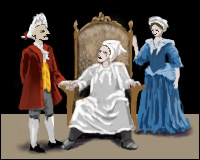 Fear of disease is one of the few neuroses to have remained with us throughout history, unaffected by civilisation and urbanisation. Who hasn't experienced an irrational fear such as: 'is my headache a brain tumour? Is my chest pain a heart attack? Is my leg pain really deep vein thrombosis?' For most, these feelings are short-lived. However, for the hypochondriac the fears become more persistent, long-lasting and disruptive.

The word 'hypochondria' comes from the Greek terms 'hypo-', meaning beneath and 'khondros', meaning cartilage. This refers to the Ancient Greeks' suspicion that the problem lay somewhere in the upper abdomen (or beneath the partly cartilage-containing ribs). The upper parts of the abdomen are still called the left and right hypochondria by medics today.

Hypochondria (known in medical literature as hypochondriasis) lies within the domain of psychiatry, and the DSM-IV and ICD-101 both include a similar definition, summarised as:

This last criterion is easy to imagine. Someone preoccupied with the idea that they have a severe disease will be upset and will often limit their activity or social interaction to fit in with their perceived condition. Patients will frequently 'doctor-shop', seeking second and third opinions once one doctor has failed to reassure them.

Nobody quite knows how common the disorder is. Despite its appearance in psychiatric textbooks, most sufferers will never see a psychiatrist about their problem. It's mainly encountered by general and family doctors out in the community. Most hypochondriacs are relatively young (in their 20s and 30s) but the condition can start at any age and is often associated with other anxiety disorders or even depression.

Medical students, while learning about horrible, disfiguring and deadly diseases, frequently have transient symptoms of whatever they are currently studying2.

Unrealistic ideas are the hallmark of other psychiatric diseases as well. In schizophrenia and delusional disorder, these are held with a much stronger intensity (that is, they are delusional3 rather than preoccupational4).

Hypochondriasis is classed as a 'somatoform' disorder, which is characterised by physical symptoms without any apparent physiological cause. This group includes conversion disorder, a physical symptom (or symptoms) produced by the brain without the individual being consciously aware of his or her actions; it also includes malingering - when an individual feigns continuing illness because they don't want to leave the hospital for whatever reason.

Another interesting and rare problem is that of Munchausen's Syndrome, which is when the individual fakes symptoms in order to have invasive and often painful procedures, due to a deep-seated need for attention and care. This is associated with pathological lying.

We all have symptoms. Everyone has at one point or another had a headache, stomach-ache, diarrhoea, back pain or muscle twinge. Most of these symptoms are short-lived, not associated with anything serious, and in fact are part of the normal life of a human body.

However, if you associate health with being entirely symptom-free all of the time (which we can agree is probably unreasonable) then each symptom is therefore a sign of disease. If you continue to have these symptoms, even infrequently, and if your mode of thinking is geared towards disease, each new symptom will be interpreted as such.

Another social theory of mental illness is that people learn to rely on the role of the ill person. People with serious illnesses are cared for, fussed over and generally treated better than the equivalent healthy person. For people who are facing difficult periods in their life, adopting the sick role may be a valid coping strategy (although not one of which they are consciously aware).

Psychodynamic and Freudian theory states that apparent physical symptoms are a means to atone for generalised guilt and low self-esteem. It can also be seen as a transfer of aggressive wishes against others onto oneself.

How Can it be Treated?

With difficulty. By definition, simple reassurance is ineffective, and most hypochondriacs continue to have episodes of symptoms which ease off as time goes on. Regular visits with their usual doctor will help to reassure patients that they have not been abandoned.

Psychotherapy, particularly in a group with other such patients, can be effective, but hypochondriacs are generally very resistant to this type of treatment.

There is no drug treatment for hypochondriasis, but if anxiety and depression are also present then these should be treated appropriately.

Luckily, over a period of years about a half to two-thirds of cases tend to resolve of their own accord.

1Books of psychiatric diagnostic criteria that are American and European-based, respectively.2You may recognise the voice of experience in this.3A delusion is a fixed, false belief that can't be explained by a person's cultural background. Delusions are accepted unquestioningly by the patient as true.4A preoccupation is when a person dwells on a notion that can't be put out of their mind. They often act on the notion without ever being certain that it's true.