The Five-card Trick Content from the guide to life, the universe and everything 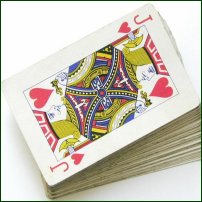 The Great Marvo demonstrates his latest trick. First his assistant, the lovely Glitzy Mitzy, presents a pack of cards to a member of the audience, who picks out five cards at random and gives them to Mitzy. She looks at the cards and then lays them out on the table; four are face upward but the fifth is face downward so that its identity is hidden. Now the Great Marvo demonstrates his magic - using his mind-reading abilities, he reads the identity of the fifth card from the air and announces it to an amazed audience. Mitzy turns over the card and, sure enough, Marvo is right!

How It's Not Done

How does Marvo figure out the identity of the hidden card? It's not done by Mitzy winking, coughing or tapping her nose to give signals to Marvo. In fact, Mitzy can be sent out of the room once she has placed the cards on the table and Marvo will still identify the card. The pack of cards is a normal one, not marked in any way. There are no mirrors involved, no hidden cameras, and no supernatural powers.

How It Is Done

Mitzy does most of the work in this trick. She chooses which one of the five cards is to be the hidden one, and arranges the other four in a way which gives coded information to Marvo. Marvo has the easier task. He just looks at the four visible cards and decodes the identity of the hidden card.

How Marvo Decodes the Information

Now Marvo looks at the other three visible cards. One card is the highest of the three, one is the lowest and one is in between. Marvo works out what order they are in (for example: Medium, Low, High) and converts this to a number using the following table:

A Boring but Important Detail

How Mitzy Lays out the Cards

Mitzy must carry out the following steps:

The trick was invented by US mathematician William Fitch Cheney Jr (1894 - 1974). It was first published in 1950, in Maths Miracles by Wallace Lee.

At first sight it is mystifying, because the hidden card can be any one of 48 - in fact, any card in the pack other than the four that are visible. The identity of the card is hidden in the arrangement of the other four cards, which can be arranged in only 24 different ways. So there seems to be not enough information to allow Marvo to identify the card.

The answer is that Mitzy herself chooses the card to be hidden from among the five given to her, and as the magician now knows its suit, there are only 12 or fewer cards to identify it from. The trick could theoretically be done with a much bigger pack, although the exact details would have to be changed slightly - the size of the pack depending on how many details we change. For example, allowing Mitzy to place the face-down card among the other cards rather than always at the start opens up the possibilities enormously.

Of course, this is more of interest to mathematicians than to stage magicians, who could perform a similar trick in many different ways, such as by forcing the audience to choose a particular set of five cards in the first place.