Wildflowers of Texas, USA Content from the guide to life, the universe and everything 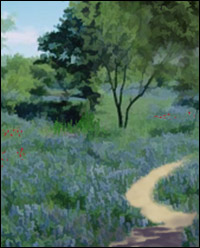 When people think of Texas, they tend to think of it as rough and macho. They think of the Marlboro man and JR from the television show, Dallas. Even the women are macho in Texas. So it is strange to think that one of the favourite pastimes is wildflower viewing.

Blame it on Lady Bird Johnson

Claudia Taylor (Lady Bird) Johnson, the wife of former US President Lyndon Baines Johnson and a native Texan herself, was always captivated by the beauty of the wildflowers of Texas. She proposed that the transportation department seed wildflowers in the Texas highway right-of-ways. Her simple suggestion led to a phenomena of wildflower appreciation that has spread throughout the state. A native Texan can't be satisfied until they have taken 'bluebonnet photos' of their children.

Bluebonnets (Lupinus texensis) are blue and white wildflowers with five pointed leaves. Bluebonnets are the state flower of Texas. They flower in the spring throughout the state, and can often be found in large single-species plantings, or mixed with other wildflowers such as the bright Red Indian paintbrush (Castilleja indivisa).

The annual riot of colour found throughout the state has made wildflower viewing a necessary part of enjoying the coming of spring. When the bluebonnets are in full flower, the sides of the roads will be full of proud parents snapping photos of their children. In fact, one must be especially careful during those times, as drivers may become erratic trying to find the largest, most beautiful patch. The flowers usually begin blooming in mass in late March and early April - however, May is often the best time to see them.

National Wildflower Week is the first week in May. It is the perfect time to see the Texas wildflowers. You will need a car to get to the best viewing sites, but any vacant patch of ground will have its share. There are many parks and nature centres that encourage wildflower viewing. If you want more information about Texas wildflowers, check out the website of the Lady Bird Johnson Wildflower Center. Not only can you learn more about wildflowers, but you can check ahead to see which flowers are in season.

While it is commonly believed that it is illegal to pick blue bonnets in Texas, there is no actual prohibition, else every precocious little girl dragged out to fields and roadsides across the state in spring would be ticketed as they invariably pick, (and sometimes try to eat) blue bonnets to the horror of their camera- toting parents. So you won't do any harm by picking a few, but keep it reasonable. If you want a good supply of the flowers at home, buy a packet of bluebonnet seed. They can be found at many tourist shops and garden centres. Enjoy spring.

A member of the pea family, this lupin sends up a single stalk containing several blue and white-petalled flowers. The plant has five veined star-like leaves. The flowers form fuzzy beans which have a bluish-white cast. There are six varieties of bluebonnet that grow in Texas. They are not in fact protected by state law, but by a firm belief among Texans that such legal protection exists.

This flower shoots up in early to mid-spring. The flower stalk is tall with a close cluster of flowers that are tipped with an intense orange-scarlet colour. It looks as if the ends of the petals have been dipped in paint, hence the name.

These two- to three-inch flowers have four petals each and a yellow cross-shaped pistil in the centre. The petals are white in the centre and are veined and tipped in pink. The flower closes at night and in wet weather. Although this variety is one of the most common, there are also white oenothera, and a closely-related yellow variety known locally as the Texas buttercup.

This is an impressive flower with yellow and red centres and two-tone red and yellow petals. It comes to full flower in the heat of early summer.

This spike-leaved flower usually has one or two large round purple flowers on each stalk. It blooms in the early summer, and can grow up to five feet in length.

This large, hardy, yellow-petalled daisy has a brown or black centre. It begins to flower in the spring, and continues straight through the summer.