Hole Punches Content from the guide to life, the universe and everything 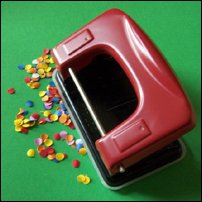 The basic type of hole punch has a large handle on a flat base, with a removable tray underneath. Once the handle is depressed, two metal rams or spikes are pushed down through corresponding holes in the base. A spring pushes the handle back up once it has been released.

If a piece of paper has been placed in the gap under the rams, two small circles will be punched out; which drop neatly into the base or fall on to the floor, depending on the type of punch you are using. The piece of paper can then be threaded on to the rings of a ring binder, so that it is held securely, and is easy to find again. Punching holes into a piece of paper instantly signifies that the piece of paper is a part of something larger than itself...

Once you have collected a lot of small circular pieces of paper in the base, you can empty it. The amount of paper wasted by disposing of the punches is vast. If all the paper rounds created by hole punches each year, were laid end-to-end, they would blow away in the wind before anything meaningful or significant could be attached to the endeavour. Many people use them as confetti for weddings or to stuff sagging bean bags.

Other types of paper punches are designed for making holes in such things as tickets and subscription cards. Ticket punches cut holes, wedges, or sometimes quite complex shapes. They are used by officials to show recognition and acceptance of the ticket bearer, which is almost always a good thing. Holes punched into subscription cards may mean that you don't have to worry about making a payment for a certain period; or that you will soon be entitled to something for which you haven't specifically paid, such as a free cup of coffee or a sandwich; which is also, in general terms, a good thing.

In any case, hole punches are tools that change the world in ways that are often more significant than a tiny circle of paper might suggest.