Leopold Ritter von Sacher-Masoch - Eponym of Masochism Content from the guide to life, the universe and everything 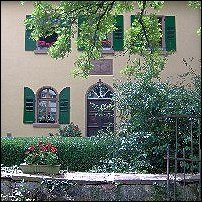 The term 'masochism', named after Leopold Ritter von Sacher-Masoch, will be known by many, as will be the term 'sadism', named after the Marquis de Sade. Both terms are commonly so closely linked (known as sado-masochism; a more recent term is BDSM) that people sometimes confuse the persons behind these terms and have poor Sacher-Masoch die in Charenton Lunatic Asylum, France - a place where de Sade allegedly spent the last years of his life nearly a century before. Most people will probably at least have a vague idea what masochism is. However, not quite as many people know who coined the term and/or have heard of the man who involuntarily served as the inspiration.

The term masochism was coined in 1890 by the psychiatrist and neurologist Richard Freiherr von Krafft-Ebing (1840 - 1902) in the third revision of his work Psychopathia Sexualis which was first published in 1886. He described the desire of being tortured and humiliated to enhance male sexual pleasure as masochism. He chose this name because of the works with this theme written by the Austrian writer Sacher-Masoch. Although Sacher-Masoch and his friends protested against this, Krafft-Ebing did not change the term. This Entry is not about masochism, but about the life of the unfortunate eponym.

The family were wealthy, and little Leopold was cared for by governesses and servants. Not much can be found about Sacher-Masoch's childhood, except for an incident, told in different versions: when he was about ten years old, he played hide-and-seek and apparently ended up in the room his aunt used for her secret affairs. He hid either in the wardrobe or in a coffer when his aunt and her lover entered the room. He then watched them making love. According to one account, his aunt chastised him upon discovery. Another source develops the story even further in telling that the aunt's husband came in, but instead of having a go at his wife it was vice versa: she beat her husband out of the room while cursing him. When she found Leopold, she castigated him. Sacher-Masoch later described this chastising experience as being not so much painful, but rather one full of relish.

In 1848 the family moved to Prague and it was only then that Sacher-Masoch learned German, the language of all his literary work. He studied law, mathematics, and history in Prague and Graz, where his family moved in 1854. He received his doctorate in history at the age of 19 and qualified to become a professor in 1857. In 1860 he was appointed professor of history at the University of Lemberg. Soon after that, he became an independent author.

Between 1861 and 1865 he had his first masochist affair with Anna von Kottwitz who left her husband for him. He later processed his experiences in his novel Die Geschiedene Frau (The Divorced Woman), 1870.

In the spring of 1869 he made the acquaintance of Fanny Pistor with whom he signed a contract about being her slave for the duration of six months. The pair travelled to Italy on the train: she first class, he third class. Whereas the heroine Wanda von Dunajew of his short novel Venus im Pelz (Venus in Furs)3 was based on Anna Kottwitz, the final version, published in 1870, was based on Fanny Pistor.

In 1870, he quit his job at the University of Graz. He published the first part of Das Vemächtnis Kains (The Legacy of Cain) which comprised the famous Venus im Pelz. He lived in Salzburg for a year. In 1871, he was briefly engaged to the actress Jenny Frauenthal. In 1872, his illegitimate daughter Lina was born to Caroline Herold. Sacher-Masoch made the acquaintance of Angelika Aurora Rümelin (1845 - 1906?), who had taken on the name Wanda after the heroine of Venus in Furs. She intended to take the part of the 'cruel woman' for him. She wrote books under the pen name of Wanda von Dunajew. In 1873 they moved to Vienna where their son Leopold was born, but he died shortly after. They moved to Bruck an der Mur, and married in Graz.

For the next ten years or so the family were rootless and moved from place to place, due to the fact that Sacher-Masoch had to earn a living with his writing. Sons Alexander and Demetrius were born in 1874 and 1875 respectively. In 1877, the second part of Das Vermächtnis Kains was published. Sacher-Masoch was very creative throughout his life. His literary work comprises about 80 novels, approximately 100 novellas and essays and eight dramas. He wrote numerous articles for newspapers and magazines and was the editor and/or publisher of several magazines and reviews in Graz, Budapest, and Leipzig between 1866 and 1885. His work was translated into various languages, among them Russian, Danish and French. He was very popular and had a huge following; however, he had many enemies at the same time, mainly in anti-Semitic Germany. Sacher-Masoch had always fought against anti-Semitism, so as a reaction to his enemies' criticism and attacks, he wrote the polemic reply Ueber den Werth der Kritik (1873).

In 1883, on the occasion of his 25th literary anniversary, he was awarded the French 'Croix de la Légion d’honneur' in Paris. An album presented to him with 500 autographs of famous European scientists and authors was cause of great joy and pride. However, it was the year that his wife Wanda left him for her lover Armand Rosenthal aka Jacques Saint Cère. Son Alexander died in 1884. Sacher-Masoch was divorced in 1885, with Wanda being the guilty party.

On 19 December, 1886, an article appeared in the French newspaper Le Figaro. This described an incident said to have taken place in 1881 which involved King Ludwig II of Bavaria4. In the spirit of the book Die Liebe des Plato (The Love of Plato,1870), Ludwig is said to have met with Sacher-Masoch, who was blindfolded on these occasions, several times. He called himself Anatol, after the heroine of the novella. Eventually 'Anatol' allowed Sacher-Masoch to see his face on one occasion, suggesting that Sacher-Masoch come and live with him, to rescue him from desperation. Sacher-Masoch declined the offer. It was only later that he saw a picture of 'Anatol' and realised whom he had met.

Although this was all positive, Sacher-Masoch's financial situation was far from it. In 1885, Hulda Meister had saved his possessions from being seized when his international magazine Auf der Höhe for which she worked as a translator, flopped. With some inherited money she bought a stately home in Lindheim, Hesse, Germany, intending to make it a place where Sacher-Masoch could find peace. His children Olga (1886), Marfa (1887), and Ramon (1888) were born and he married Hulda in 1890. Money was tight, so in 1890 the family moved to Mannheim, where Sacher-Masoch worked as literary critic and feature writer at the Neue Badischen Landeszeitung, as well as editor of a feature newspaper. After von Krafft-Ebing had coined the term 'masochism' the same year, Sacher-Masoch's reputation was ruined. Differences with the publisher of the feature newspaper put an end to the time in Mannheim, and the family returned to Lindheim in 1891.

In Lindheim, he was confronted with solid anti-Semitism, with the anti-Semites winning three out of nine mandates in upper Hesse during the parliament elections of 1893. The pastor of Lindheim, Rudolf Ludwig Oeser5, had written the anti-Semitic narrative Das Volk und seine Treiber (The people and its drivers) as early as 1859, which was permanently reprinted. This was the situation Sacher-Masoch set out to change. He was convinced that illiteracy and the general lack of education among the rural population was the medium for anti-Semitism, and he did all he could to change this. In January, 1893, he founded the 'Oberhessischer Verein für Volksbildung' (Upper Hessian Club for People's Education) and soon 29 regional groups had been established. Furthermore, he set up public libraries, initiated choirs, orchestras, and theatre groups. Within a year the club had many members and there were 20 public libraries - an enormous success because there hadn't been any before. He engaged well-known musicians and actors. Usually, amateurs starred in the plays, demonstrating nicely that Jews and Christians could work together in harmony - something which was not at all self-evident in the area and at the time. Many teachers volunteered to read lectures. Sacher-Masoch was the driving force behind all these activities, and after his death on 9 March, 1895, the clubs soon disintegrated.

His body was cremated and his widow wanted to have it buried in Graz, but the city of Graz refused to allow this. In 2003, when Graz was European Capital of Culture, Sacher-Masoch was remembered and the town held a Sacher-Masoch Festival in his honour. Alas, they couldn't get the urn with Sacher-Masoch's remains now, even if they wanted to: the urn had been kept in the neighbouring palace of his home, and the palace burnt down completely in 1929. It is not too surprising that there is the joke that 'only a masochist can enjoy being cremated twice'.

Although most of his work is out of print nowadays6, and there is some argument about whether or not Sacher-Masoch would be remembered at all had it not been for his connection to masochism, his most famous work, Venus in Furs is still commonly available and provided the basis for various films. In 1967, the band Velvet Underground released the song 'Venus in Furs', produced by Andy Warhol.

1A title which translates as 'knight'.2This town used to be in the Austrian Empire. Today, it is known as Lviv and is in the Ukraine.3This was first published in Westermann's illustrirte deutsche Monats-Hefte,18664Aka 'mad King Ludwig' in English, and the 'Märchenkönig' (fairytale king) in German.5His pen name was O Glaubrecht which literally means: Oeser, believe right!6Unfortunately, his compassionate novellas about the eastern Jewish Chassidim and the simple peasants and craftsmen and their life near the ghettos (Don Juan von Kolomea, 1866) as well as his dramatic works (including Der Mann ohne Vorurtheil, 1866) are practically forgotten.