Yorkshire's Castles: Ripley Castle Content from the guide to life, the universe and everything 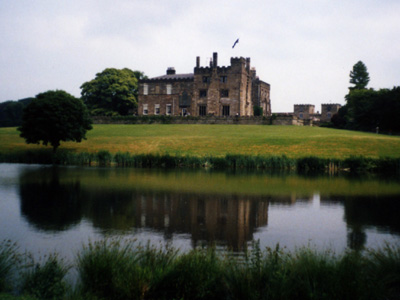 Situated between Ripon and Harrogate, Ripley Castle has beautiful grounds including a series of hothouses, a walled garden, lakes complete with waterfalls, and a deer park. Despite its name, it is not really a full castle. It is in essence a fortified tower house, that is to say a manor house with one large defendable tower. Despite this, it is well worth a visit as it is situated in beautiful gardens next to a perfect Yorkshire Village and has a fascinating family history.

Immediately on entering the castle courtyard you notice the manor house with its tower, the gatehouse and the grounds, gardens and parks ahead. The castle's gatehouse dates from around 1450, when the owners were supporters of the Lancastrian cause and were given a licence to crenallate by Henry VI.

Although the gatehouse is not the most defensible in Yorkshire, it is an impressive crenallated building that has survived the centuries with little alteration. It is still possible to see the impact holes left by musketballs on the courtyard side of the castle where Parliamentary troops shot Royalist supporters during the Civil War - some of the Roundheads obviously weren't very good shots as some are ten feet off the ground!

The only fortified part of the castle other than the gatehouse is the Old Tower. The tower was finished in 1555 and originally was not accessible from the manor itself, only through an external door to increase security. It is three stories tall with a steep stone spiral staircase in the south-west corner. It originally had two rooms on the ground and first floors, with the Knights Chamber at the top.

The ground floor of the tower is now the Library, with books dating from the 16th Century. One of the books is a 1684 cookbook written by the castle's head cook - a recipe in it for beer is now produced by the Boar's Head Inn opposite the castle.

The first floor of the tower was originally the master bedroom and dressing room, but is now a single room known as the Tower Room. It's oak panels were originally part of the deck of Her Majesty's Frigate Rose, a ship dismantled in the 1750s. In 1603, on the death of Queen Elizabeth I, James VI of Scotland was to inherit the throne. On his journey to London he stopped at Ripley Castle, spending the night here. In preparation for this event a new plaster ceiling was built in the room in his honour, decorated with pomegranates and sweetcorn beams, crowned heads, the Royal Lion, Unicorn of Scotland and Fleur de Lys. It was hoped that James would be impressed enough he would reward the Ingilby family handsomely, yet it did not seem to make an impression.

The second floor room is known as the Knights Chamber, with wooden panelling dating back to 1555, and one of only three 'waggon roof' roofed towers to still exist in the country. Its most interesting feature is the priest's hole built into the wall. After 1585 it was Treason to house a Catholic Priest in England. The punishment was a slow, lingering death. Francis Ingleby, though, was a Catholic priest and used the hole to hide. It contains a stone ledge to sit on, a small hole for ventilation. It was so well hidden that it was not discovered until by accident in 1964. Francis Ingleby was later found, hung, drawn and quartered near the site of the present York racecourse.

The rest of the castle is a fairly recent manor house, dating from the 1780s. The manor contains many fine pieces of furniture, art, paintings and other examples of what you would find in fine country houses of the period. At the time of building, the original manor house was in a desperate state. Sir John Ingleby had married the wealthy Sir Wharton Amcotts' only heir, Elizabeth, and expecting a large dowry he began work on rebuilding his home, borrowing the vast sum of £12,000. He was not able to afford the repayments, and as he did not get any help from his father-in-law, was forced to flee abroad to avoid bankruptcy. Although the cost of the house was finally paid off by 1804 it had cost him dear - his wife had left him.

The story of Ripley Castle began soon after the Norman Conquest in 1066, when one of William the Conqueror's associates Ralph Paganel was granted a large estate at Ripley. His descendant married Sir Thomas Ingilby in 1306, and almost 700 years later his descendant, also Thomas Ingilby, still lives in the castle.

Since then the castle's history has become inseparable from the story of the Ingilby family over the last 700 years. Perhaps the most memorable occurred during the Civil War when the Ingilbys, like most of Yorkshire, were Royalists. Jane Ingilby, born in 1601, is reputed to have fought at the Royalist defeat of Marston Moor, disguised as a man under a full suit of armour. She escaped the defeat and fled back to Ripley with her brother, a wanted man, arriving back at Ripley shortly before Cromwell and his troops. Despite the executions at the church and gatehouse, 'Trooper' Jane is said to have spent a night holding Cromwell at gunpoint in the library to prevent him from finding her brother, hiding in the priest-hole in the Knights Chamber upstairs.