Garum or Liquamen, a Pickle of Fish Content from the guide to life, the universe and everything 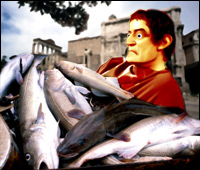 Garum1 was a smelly decomposed fish sauce used extensively in Roman Cookery. Liquamen was a runnier version, often used as a stock.

This Roman condiment or 'Gentlemen's Relish' was made by fermenting and salting fish and assorted shellfish for three months in open tanks. After fermentation the resulting goo was then packed in amphorae and shipped back to Rome, where it was much-prized as a seasoning.

At first sight this process does not seem to produce an edible result. However, the fish intestines that were an essential ingredient provided enzymes to break down the mixture, so the decomposition was not primarily bacterial. The salt also acted as a preservative.

Even so, the process was very smelly. So smelly, in fact, that it was declared illegal to make garum in a private house. As a result it was entirely produced in 'garum factories' along the coastline, where small fish such as the sardine and horse mackerel abound.

The salting tanks have been found all around the southern and south-western coasts of Iberia, from the Tagus and Sado Rivers to Cadiz. One of the largest concentrations of production facilities was found at Troia at the mouth of the River Sado, in Portugal. There were also smaller concentrations in the Algarve such as those at Boca do Rio, Praia da Luz, Lagos and Quinta do Lago.

It is believed that the different sizes of tanks were used to differentiate the production of various salted fish commodities, from the assorted mixture used for the garum to sardines and mackerel and tuna.

Take this costly gift, the proud gift
That's made from the first blood
Of a still breathing Mackerel
-- Martial2 Book 13, Epigram 102

The best quality garum was fermented from the livers of Red Mullet3 (Mullus surmuletus) or a similar species (Mullus barbatus). Pliny4 describes the dish of garum sociorum - mullet smothered in a mullet sauce - as one of the most luxurious.

Ordinary garum was usually made from the intestines of the Mackerel (Scomber scombrus) and Horse Mackerel (Trachurus trachurus).

The lowest quality was not even graced with the name of garum but instead called muriae. This was made from any fishy trimmings, including shellfish, mixed with brine and oregano, then cooked and spiced with wine.

A further by-product, the sludge from the bottom of the tanks, was known as allec. Pliny noted that this could be used as a salve for burns, but its efficacy also depended on the patient being ignorant of the source!

The Roman kilns excavated at Martinhal, near Sagres, produced great quantities of amphorae. These were probably made purely for packaging the locally-produced garum for shipment. Amphorae discovered in Italy have now been traced to this source.

Lusitanian garum was considered the best - definitely a superior product likely to be found on the shelves of the Fortnum and Mason's5 of the times.

Feeling hungry? See what your fellow Researchers are eating.