Tower 42 Content from the guide to life, the universe and everything 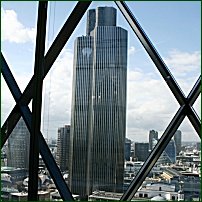 How many floors does the tallest building in The City of London have?

Now remember that - it may help you in a pub quiz one day!

At this point, the brightest readers will have figured out why the building is officially called Tower 42, but to many people, the building that has dominated the skyline of the square mile since the start of the 1980s will always be known as the Natwest Tower.

From the Drawing Board

In May, 1970, planning permission was granted for what was to be a 650ft (198m) tall tower, but the resultant building was not 650ft tall. It was 600ft (183m). Designed by Richard Seifert, it was the tallest cantilevered building in the world when it opened. In a cantilevered building, the loads on the floors are fully balanced by a central shaft. This allows the building to be tall, but not have much floor space. This was okay for the tower because it could not have a large footprint. It was allowed to be so tall because the developers had combined the air rights1 for the building with that for the next-door site.

The foundations of the tower reach 160ft (50m) down into the clay. The building was developed for National Westminster Bank, and from this grew one of the big myths about the building. It is said that the floor plan was designed to replicate the bank's famous logo. Seifert denied this, but that didn't stop the bank using shots of the building in its adverts.

Construction took only nine years, and it opened in 1980, taking the title of the UK's tallest building away from The Post Office Tower (now BT Tower). Queen Elizabeth II officially opened the building in June, 1981. The cost of the project was £72million. It was claimed to be the straightest skyscraper yet built thanks to the lasers that were used to monitor its construction.

As the face of banking changed after the 'Big Bang2', the limited floor space that the Natwest Tower provided started to hinder the company's performance. Then an even bigger bang happened. The IRA set off a bomb in the Bishopsgate area of London in 1993, causing vast damage to the tower. It was refurbished, but when it reopened in 1995, Natwest decided not to reoccupy the building.

After renaming it the International Finance Centre, they sold it. The new owners, Greycoat, renamed it Tower 42. It now houses offices and two restaurants, both of which are very exclusive.

Where to Find it

The tower stands on a patch of land between Broad Street and Bishopsgate, north of Threadneedle Street and south of London Wall. It is a short walk from Liverpool Street and Bank stations and is not too hard to find.

It can also be found by watching the Hitchhiker's Guide To The Galaxy television series, where it features at one point.

Of Playwrights and Plotters

The site that the tower currently occupies has been occupied by a number of buildings that have played an important part in the history of London:

All your Quiz Question Answers

1Air rights are the rights to use the airspace above the ground for development.2The Big Bang was a deregulation of jobs in the London Stock Exchange which led to a change in how trading was carried out.