Bill Bailey - Comedian and Part Troll Content from the guide to life, the universe and everything 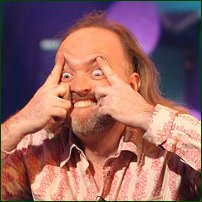 In 1964, one Mark Bailey, now a famous British musician and comedian, made his way into the world. Born in Bath, Somerset, he attended King Edward's School in Bath.

I spent my childhood scrambling round badgers and foxes and playing fantastic country kid games like knocking on people's doors and running away. God that was a good game.

One day in class, his teacher began to sing the wartime song 'Won't You Come Home Bill Bailey'. The nickname stuck, and the young Mark Bailey has forever since been known as Bill Bailey. He is now a stand-up comedian with big googly eyes, long hair though balding, a strange little beard and a generally confused-hippie air about him.

It's not a beard, it's an animal I've trained to sit very still.

The Start of Things to Come

From an early age it was obvious that Bill had a natural ability with music1. It enabled him to become an associate of the London College of Music. He was never, however, destined to become a classical musician as his music was always tied together with humour and comedy. He'd spend much of his spare time with a band called Famous Five and listening to Monty Python's music2, which is not serious by any stretch of the imagination.

This is a song inspired by the work of Phil Collins; the nasty, whining little git.

After leaving school Bill went to university. He completed the first year of an English and Drama degree in London before he happened to walk into a John Hegley comedy gig one night. This changed his life as he decided to become a stand-up comic. Comedians generally don't hit the big time on their first outing, and Bill worked as a lounge pianist, a door-to-door salesman, and, perhaps appropriately for such a surreal comedian, the accompaniment for a mind-reading dog.

He acted alongside Vanessa Redgrave and Frances de la Tour in a Workers' Revolutionary Party stage production called The Printers. Then in 1989 he paired up with Martin Stubbs to create a comedy double-act called The Rubber Bishops. Bill and Martin were phenomenally busy, sometimes playing as many as three or four gigs a night. This sort of dedication to the craft soon paid off and it became obvious that success was near. Bill crafted his routine into a strange surreal mix of jokes, music and parody; then he discovered the Edinburgh Festival.

I'm English and, as such, I crave disappointment.

Back in 1947, little did the Edinburgh Festival Fringe first-time organisers know that during its coming lifetime, comedy legends such as Alan Davies, Jenny Eclair, and Baddiel and Skinner would be embracing its environment and delighting millions of fans. Bill's first appearance at the Fringe was in 1994, when he and Sean Lock put on a performance called Rock. It was about an ageing rock star and the show flopped so spectacularly that one performance had only a single person in the audience3.

Three blind mice walk into a pub. But they are all unaware of their surroundings, so to derive humour from it would be exploitative.

Bill was not discouraged though; the following year he supported Donna McPhail and won the Time Out award. His breakthrough year though was 1996. He returned to Edinburgh for a one-man show, a critical masterpiece called Bill Bailey's Cosmic Jam, which saw him nominated for the Perrier Comedy Award. In the closest vote in the awards history, Bill lost out to his future co-star Dylan Moran. Ever since then Bill Bailey's diary for August includes the line 'performing at the Edinburgh Festival Fringe'.

It's true. Hitler was a vegetarian. Just goes to show, vegetarianism, not always a good thing. Can in some extreme cases lead to genocide.

I'm a vegetarian, I'm not strict. I eat fish. And duck, but they're nearly fish aren't they?

Bill Bailey's nomination for the Perrier was enough to get him noticed and in 1998 the BBC gave him a show called Is this Bill Bailey? It wasn't his first foray into TV, as Bill had appeared as a guest on various panel-style quiz shows and stand-up comedy shows, but this was the first show he'd written and appeared in. Then in 2000, Channel 4 commissioned a sitcom called Black Books. Starring alongside Dylan Moran and Tamsin Greig, Bill played the character of Manny Bianco, a sales assistant in a run-down second-hand book store controlled by a permanently drunk Irishman named Bernard Black (Dylan Moran). The series was written by Graham Lineham, who co-wrote Father Ted, and became a major success, spawning a further two series and making Bill a household name. Bill's popularity increased and when Sean Hughes quit as one of the team captains on the popular BBC 2 quiz show Never Mind The Buzzcocks, Bill stepped in and remains a captain till today (2007). Bill's TV work forms a major part of his life. The list of shows he's been on is huge, and some examples are:

In perhaps one of the greatest pieces of casting in Hollywood history, Bill provided the spoken thoughts of the Sperm Whale in the movie version of The Hitchhiker's Guide to the Galaxy. His slightly-confused tones resonated particularly well with the words Douglas Adams wrote as the whale crashed out of orbit. Since then he's started to get even more work, playing the part of the front desk Sergeant in Simon Pegg and Edgar Wright's smash-hit comedy film Hot Fuzz.

With all his TV and film work, Bill remains a stand-up comedian. The general format to a Bill Bailey show involves Bill shambling onto the stage looking much like a lost roadie. He'll then proceed to mutter a few words and launch the audience into hysterical laughter before they realise what has happened. As well as his spoken humour, Bill's gigs often include videos, and always include humorous music and songs based on his abilities with a number of instruments4.

A feminist jumps out of a manhole - oh, and she didn't like that.

He has so far released three DVDs of his stand-up shows: the original Cosmic Jam Shows, the 2001 Bewilderness show, and the latest taken from his Part Troll tour in 2004. This tour was perhaps the longest and most politically-incorrect to date.

Beautiful ladies in danger
Danger all around the world
I will protect them
For I am Chris de Burgh5.

Part Troll premièred in July 2003 at the Edinburgh festival and continued for a massive 52 gigs before finally closing at the Hammersmith Apollo on 1 January, 2005. After this final gig Bill appeared on stage with his Kraftwerk tribute band called Augenblick6 to perform a selection of his favourite rock songs. He continues performing in all manner of guise such as with the BBC Symphony Orchestra for Comic Relief in 2007.

As befitting his comic abilities, Bill came in 7th in Channel 4's 100 Greatest Stand-Ups TV Poll show. The future is rosy for such a great comedy genius even if he does seem a strange troll-like figure. An intensely-private family man, father-of-one Bill has been married twice.

1In fact Bill is one of the few people in the world with perfect pitch. This is the term given to those people who can pluck a given note out of the air and hum it without reference to a piano.2You can easily see the influences of the Pythons in Bill's music and comedy.3The show was later serialised on Mark Radcliffe's Radio 1 show.4Bill can play, guitar, keyboards and even the Theremin.5Bill does many comedy routines about his hatred of Chris de Burgh, his 'Axis of Evil' sketch in the Part Troll tour is genius, according to showgoers.6Bill appears on stage during the Part Troll tour to perform the Das Hokey Kokey comedy routine with Martin Trenaman, Kevin Eldon and John Moloney who make up the band.