The Women's Land Army in Britain Content from the guide to life, the universe and everything 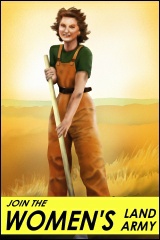 The Land Army fights in the fields. It is in the fields of Britain that the most critical battle of the war may well be fought and won.
Lady Denman, 1939

In 1939, the farming community of Britain greeted the idea of a Women's Land Army (WLA) with scorn. It was the view of those who worked the land that it was no place for a decent woman.

More than 100,000 Land Girls and 11 years later, it was the once-sceptical National Farmers' Union that protested the most when the WLA was officially disbanded.

How can such a change of heart be explained?

The WLA set out to replace men in the fields, the milking parlours and the forests for the duration. That it achieved that goal so successfully, is down to the great vision and organisational skills of Lady Denman, the WLA's Director, and to the hard work, dedication and cheerfulness of thousands of girls who met the challenge and kept Britain fed for over a decade.

The roots of the WLA lie in World War One. Germany successfully mounted naval blockades on Britain's food imports, which made up 50% of the country's requirements. There was an acute farm labour shortage because workers were needed for military service and horses were commandeered by the forces. In 1917 the harvest failed and Britain was left with just three weeks' reserve of food. Famine loomed.

The Government's Food Production Department acted with alacrity and set up the Land Army. Lady Trudie Denman (of the fledgling Women's Institute) was appointed to organise the WLA and by 1918 there were 23,000 Land Girls at work milking, ploughing, herding and even thatching. In 1919 the WLA was disbanded as men returned home and shipping once again delivered food to Britain.

On the eve of World War Two there was a recognition that Britain needed to grow more of its own food, to avoid the near disaster of 1917. Subsequently, between May and September 1939, farmers were paid £2 per acre of grassland that they ploughed up, for what was known as the Battle for Wheat. The aim was to have two million acres of grassland ploughed in time for the 1940 harvest. The target was reached in April 1940.

Alongside the policy for increased food production, there was a realisation that there was a shortfall of around 50,000 agricultural workers, due to decades of emigration to urban factory work, recruitment into the forces and then general conscription. It was to fill this gap that the WLA was reborn.

Despite praise in 1918 for the WLA from politicians and farmers alike, by the time it seemed inevitable that Britain was facing war again, its re-establishment was met with suspicion and derision. Nonetheless, Lady Denman was appointed Director and she used her experience from the previous conflict to good effect. She set up systems for recruitment, enlisting, training, placements and welfare of Land Girls.

On June 1st 1939 the second WLA was officially formed and recruitment got underway. The first two groups of Land Girls were trained before war broke out in September.

The girls were interviewed to see if they were suitable, then were given a medical examination and enrolled. The official minimum age was 17, but some lied and became Land Girls at 16 or even younger. It wasn't hard to get into the WLA. One girl stated that she didn't have flat feet or varicose veins when asked by a doctor and was accepted with no further examination. Another who wore glasses, was asked to read a sheet of letters of diminishing size. As she struggled to undertake the request, the doctor said Never mind, I suspect you'd see a charging bull and passed her. Life then changed and gave many new Land Girls a rude awakening.

Life in the Women's Land Army

All Land Girls were issued with a uniform, which became synonymous with healthy, outdoor living. For walking out1 they wore laced brown brogue shoes, baggy brown corduroy breeches and knee length fawn socks. A green V-necked long-sleeved ribbed jumper was worn over a fawn aertex shirt, with the WLA tie for formal wear. And on their heads they wore brown felt porkpie-style hats. A three-quarter length waterproof brown overcoat finished the outfit. Brown dungarees, a matching jacket and wellington boots were issued for work clothes.

Most Land Girls had been barmaids, waitresses, maids, hairdressers, mill workers before joining the WLA. Some had joined straight from school. Few had ever worked the land and many had not lived in the countryside. More than a third of the girls came from London and the industrial cities of the north. They were insulated from country life and they did not always understand what was required of them, despite their introductory training. The reality of being a Land Girl was far from being that depicted on the glamorous recruitment posters.

At the outbreak of war, the average wage for a male agricultural worker was 38 shillings a week, well below the national average wage of 80 shillings a week. Thanks to Lady Denman, Land Girls were awarded a minimum wage, but this was even less than their male counterparts would receive. They earned just 28 shillings a week, half of which was typically deducted for board and lodgings. Once a girl had worked six months, and if she was working more than 20 miles from home, she was entitled to a free journey home, courtesy of the WLA. However, there was no set holiday entitlement, paid or unpaid. It was left up to individual farmers to decide when a girl could take time off.

At the start of the war almost all the Land Girls lived in lodgings or billets near to, or actually on, the farms to which they'd been allocated. These could be cottages with the families of other workers, or in the farmhouse with the farmer and his wife. Few such houses had baths or readily available hot water for washing. As the war progressed, mobile gangs of Land Girls were set up to work on different farms. They lived in hostels which were vacant country houses and schools, where they were looked after by a warden and where conditions tended to be more comfortable than in billets. There could be anything between 6 and 100 girls in these hostels.

While the Land Army Manual gave the girls advice about adapting to their new lifestyles, it was nevertheless a shock for the city girls in particular.

One Land Girl, in her first week of work, was handed a bucket of soapy water by the cowman and told to wash down the cow just milked. He turned to get on with milking the next in line and was exasperated to see that the Land Girl washed the cow down from head to foot, rather than just the udders as he'd intended. Another girl was asked if she would help castrate the pigs and almost passed out when she saw what it meant.

Not only were there new skills to learn and knowledge to acquire, but the work was very hard. Farm machinery was made for and operated by fit men, used to the physical requirements of the job.

The hours were long: morning milking usually started at 4 o'clock. They were expected to work 48 hours a week in winter and 50 hours a week in summer, but most girls worked many more, especially during the harvest.

Many girls were placed on farms singly, so loneliness could be a problem. Lady Denman had foreseen these issues and the County Committees and support staff that she set up ensured that the girls had somebody to talk to about any concerns that they had.

To describe every job that the Land Girls did would be impossible because they did everything that had to be done on the land. Not only did they plant and harvest wheat; they milked cows and delivered the milk by pony and trap to local houses; they picked sprouts; they dug potatoes; they tended flocks of sheep; looked after pigs and poultry; they picked fruit. There were specialists who were trained in rat-catching and there was the Timber Corps, which felled, hauled and milled Britain's commercial forests.

In 1945, servicemen began to return to Britain once the war ended. But the WLA was still hard at work, ensuring that there was enough food. Whilst the Women's Land Army did not prevent food rationing in Britain during the war, it did prevent a famine. There was always enough food to go round. But their efforts were required for several years once the war ended, until the male agricultural workers returned to the land. And once they had, the girls helped them to learn how to operate the machinery that had been introduced in the years that they had been away.

Many girls had given up full-time work in factories, in hotels and in service to join the Land Army. Despite Lady Denman's best efforts, and unlike servicemen and women, Land Girls had no help to find peacetime work at the end of the war. This caused some distress as girls faced unemployment. In fact Lady Denman was so incensed by the situation, that she resigned as Director of the WLA in 1945 in protest2. Needless to say there were girls who stayed on the land; either as farmhands, or because they married men they met while they were in the WLA, but most eventually found work elsewhere.

The number of girls working in the WLA gradually decreased until, on October 21st 1950, it was officially disbanded. At a ceremony at Buckingham Palace 500 Land Girls marched past the Queen, who addressed them:

I have always admired their courage in responding so readily to a call which they knew must bring them ... hardship and sometimes loneliness. Now the time has come to say goodbye, because the job has been done, but the sadness which many feel should be outweighed by pride in the achievement.

1When not working.2Notwithstanding this, she was awarded the Grand Cross of the British Empire in 1951 for her work with the Land Army.