The Properties of PC Lights Content from the guide to life, the universe and everything 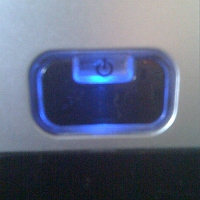 Your average PC has more lights than most people think. For example, your average, everyday IBM-compatible PC has between one and three main lights on the front. Most of these are LEDs, or Light Emitting Diodes.

One of them is likely to turn on in a nice green colour when you push the power switch, often indicated by a nice happy sun-like picture. This is your power button, and indicates the computer is turned on. If it is yellow, red, flashing, flickering on for a moment - or not on at all - then make sure everything is plugged in (to your computer and to the plug) and the socket is turned on, check there isn't a power cut, and finally call someone to help you out.

The next little light will be green or orange and flicker wildly, usually in sync with a hackling noise. This is your hard disk light, and shows when your hard disk (which is used to store your documents, programs, data and anything else worth keeping) is doing something - be it reading or writing. This light does not show when your computer is working on something, though if it is using the hard drive, it probably is. This light probably has a little cylinder symbol next to it.

Some computers, manufactured from the late '90s onwards, have another light, which can easily be recognised by pushing the button labelled marked 'Turbo' (if you have one). If nothing happens then ignore it, your PC will work just as well. If it does light up, then all it means is that 'turbo' mode (which, according to a researcher, usually appears to slow performance1) is on.

There are also the little lights on and in all optical disk drives - that is, all those devices which read CDs, DVDs and the like. Most drives have two lights, marked 'speed' and 'busy', which tend to be green and orange respectively. The speed light shows when the disk is spinning round quickly enough, and the busy light shows when data is being read from or written to the disk. They also have a special light - a laser - inside to read from the disk.

Completely unconnected from the invention of the optical mouse - which uses a big blob of light instead of the mouse ball - and infrared devices, it seems computers are getting brighter all the time.

Your monitor, cryptically known as a VDU, also has a light or lights. Unlike anything else, the monitor seems to be exempt from any kind of standardisation. As a rule, if the big green light is on, then the monitor is switched on and working. If anything is flashing, it's not getting a signal from your computer, and if there is a dim (normally orange) or different-coloured light, the monitor is in standby mode.

The other part of the console2, the keyboard, is much easier: it has three lights, which are turned on and off by the appropriate keys on the keyboard.

In fact, almost everything you connect to your computer has a light on it somewhere, from speakers to scanners. Most printers have lights to show they are on, connected to your computer and have ink and paper.

'Surely that must be all the lights there are,' many people might now say, 'otherwise the thing would be lit up like a Christmas tree in Blackpool.' Others might suggest 'It's a ploy to keep the manufacturers of little lights in business.' But no, there are more:

The biggest single user of little lights on a computer is the network card. It has lots of lights: most have six or eight lights in neat rows which flicker on and off to show just how much data is travelling through the card.

1The turbo is a relic feature used for backward compatibility: Older pre-Windows programs often did not run well (or at all) on faster machines, so the turbo button deliberately slows the computer down. Why it isn't called 'tortoise' is a mystery2The console is a term from days when computers were as big as houses, and the user would sit in a different room to operate the thing using a console - the keyboard and screen. The only place you'll find this term today is in MS-DOS, where you can send files to the console, or read from the console using the > CON and < CON thingies; or alternatively, when someone has been programming at a computer too long and has started to resent the person who will use the program, and has written, 'Required: Console input for execution resumation,' instead of 'Press any key to continue'