The London Necropolis Railway Content from the guide to life, the universe and everything 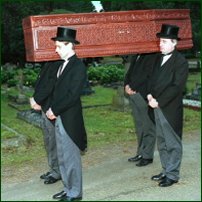 From 1854 up until 1941, the London Necropolis Railway ran trains between a station next to London Waterloo and the Brookwood Cemetery in Surrey. Making use of the line between London and Southampton, the railway existed solely to carry the dead, along with their mourners, to one of two stops inside the cemetery, which had been built by the London Necropolis Company to counter the increase in population that was causing London's cemeteries to overflow.

By the middle of the 19th Century, London had started to run out of places to put the dead. The population of inner London had doubled in just 50 years, and the cholera epidemic of 1848/49 left almost 15,000 dead in the capital alone. The health issues of cramming as many bodies as possible into the little space available were starting to take their toll, and a solution was needed before the situation got too far out of hand. In 1849, Sir Richard Broun proposed the purchase from Lord Onslow of a large area of land outside London to provide an efficient and affordable place to bury London's dead, and by 1854 the London Necropolis and National Mausoleum had been constructed at Brookwood, a short way west of Woking in Surrey and 25 miles (40 km) southwest of London.

Upon opening, the 2000-acre plot was the largest burial ground in the world, and was thought at the time to be sufficient for the burial of as many Londoners as necessary for as long as London existed. Plots were made available to various parishes and societies, but otherwise individuals could choose to be buried in any plot they liked, provided they could afford the expense.

Since 1854, the site has seen 240,000 burials and now has sections devoted to many different religious denominations as well as a series of military cemeteries and war memorials. The entire site is covered with a variety of trees and rhododendrons planted before the opening of the cemetery, though only 450 acres have actually been used for burials so far. In 1950, the Glades of Remembrance were opened for the reception of those who had been cremated. After the London Necropolis Company became uninterested in the cemetery in 1970, the grounds were taken on by a series of private buyers until the cemetery was bought by the current owners in 1985. The site is now considered to be one of national social and cultural importance.

The location of the cemetery was chosen specifically for its proximity to the London and South Western Railway, which ran out of London Waterloo towards Southampton, via Woking and Basingstoke. Broun intended to provide a private train service between London and Brookwood to carry the dead and their mourners, an idea which had previously been rejected due to the fact that the noisy and dirty railway did not seem a respectable means of transport for funeral processions. Questions had been raised as to whether persons of different denominations of faith or of different standings in life might be happy to share the same funeral train. The solution to this was naturally to have two separate sections to the train, one for Anglican funeral parties and one for non-conformists.

The line was quickly constructed during the autumn of 1854 and was ready by November. Though it was to make use of the railway between London and Woking, branches with separate stations were constructed at either end of the line, with two stops being constructed within the cemetery itself. Trains would call at a North station, which served the non-conformist part of the cemetery, before crossing over Cemetery Pales by level crossing and then terminating at the South station located in the Anglican section near the A322. Meanwhile, the London terminus was constructed next to London Waterloo on a spot between Leake Street and Westminster Bridge Road, and lasted until the rebuilding of Waterloo station in 1902 when a new London Necropolis station was constructed at 121 Westminster Bridge Road. The new building was much larger than the original, and contained amongst other things a first class waiting room and a mortuary chapel.

The first trains ran on 13 November, 1854, with trains usually running only once a day provided that a funeral was booked. However, after the turn of the 20th Century the regular services were replaced by an on-demand system, and by the 1930s trains were running just twice a week due to the new-found popularity of road vehicles. Services were run using a special Necropolis train, which consisted of both passenger compartments for the living and hearse cars for the dead. As well as the distinction between Anglican and non-conformist, the trains consisted of 1st, 2nd and 3rd class sections with different levels of comfort being available depending on how much those using the service were willing to pay. The class system also applied to the quality of the hearse carriages, which were each located behind the appropriate passenger compartments.

End of the Line

The service continued intermittently until 1941, when a World War II bombing raid resulted in a direct hit on the London terminus on 16 April. Much of the station was destroyed along with the Necropolis train, and the London Necropolis Company decided to wait until the end of the war before rebuilding. By this time it had become unprofitable to restart the service, and by 1948 the tracks had been lifted from the private branches off the mainline. The two stations in the cemetery were converted into bars for use by funeral parties, but the North bar was demolished during the 1960s due to dry rot and the South bar became disused and eventually burnt down in 1972. The platforms and the associated chapels of both cemetery stations still survive, as does the frontage of the building at 121 Westminster Bridge Road, but there is little else left of the line. The trackbed of the branch where it passed through the cemetery remains untouched, and Brookwood Cemetery occasionally organises guided walks along the line. The occasional funeral party continued to use the mainline to reach the modern-day Brookwood station, but British Rail eventually banned the practice in 1988.