Taxis in Bangkok, Thailand Content from the guide to life, the universe and everything 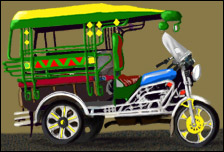 If you're a tourist in Bangkok, Thailand, here is some advice about taxis.

There are three different sorts of taxi, all of which have positive and negative aspects.

These are ridiculously expensive. However, they are reliable, and you don't feel that you're going to die before reaching your final destination. A good choice for travelling to the airport.

Not too expensive if you haggle, even better if you can get them to use the meter. Most meter-taxi drivers will tell you that their meter is broken. However, it can usually be magically fixed by the simple action of you departing the vehicle. Meter taxis are not so reliable as hotel taxis - they get lost - and they weave through the traffic like a student after a good night out.

Onomatopoeically1 named, tuk tuks are motorised trikes with one or two padded back seats. They can be very cheap, but with cheapness comes the risk of losing a limb, or your life2. However, don't be put off - they're also fun! The main problem is that while hotel and meter taxis have air-conditioning, in tuk tuks you end up breathing the delicious Thai air, which is so polluted you can cut it up into chunks, and then squeeze the humidity out of it. Tuk tuks are the best form of transport for short distances. It is essential to haggle with the tuk tuk drivers.

When you hail a taxi in Bangkok and tell the driver where you want to go, he will a) shake his head, b) make a clicky noise with his tongue and c) say 'Oooh, that's far, verrry far'. He would say this even if you could reach your intended destination by the simple action of crossing the street. He will then suggest a very fair price. However, the price would only be very fair if you had asked him to drive you back home from your holiday, including the petrol required. This is a generalisation, but very few journeys in Bangkok should cost more than 100 baht. Most should be under 50 baht3. If you think you are being ripped off, simply walk away. The price will plummet with every step you take. Then turn around and offer even less. If he accepts, you may still have been ripped off, but at a greatly reduced price! If he declines, accept his previous lowest offer. Unsurprisingly, the taxi drivers charge more around popular tourist areas.

As you are reading this, it is assumed you either have enough money to purchase a personal computer, or can afford to get access to one. You are therefore astronomically better off than Bangkok taxi drivers. Tip them, even if it's just a few baht. This may be a small amount to you, but it's a lot more to them.

1A wonderful word: from onomatopoeia - a word which sounds like what it is naming eg, cuckoo or sizzle. Tuk tuks go 'tuktuktuktuk' because of their tiny, ancient, two-stroke motorbike engines2You have been warned...3The equivalent of £0.75, €1.07 or US$1.25 (based on international exchange rates on the 21 of October, 2003).