Mellified Man Content from the guide to life, the universe and everything 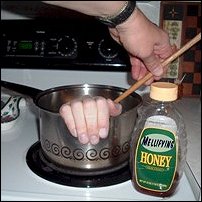 If you eat any more chips you'll turn into one.

How many of us heard that refrain from our parents when we were kids? Maybe you envisaged chips walking down the road with arms and legs. Maybe Mr Potato Head had especial meaning for you. Of course as the years passed by and you didn't actually notice yourself turning into a chip, you probably dismissed this as typical parental scare-mongering. Ranking it alongside the boogeyman under the bed, the wind changing and your face being stuck 'that' way and the chances of Santa bringing you a lump of coal, you simply marked it down as one of the lies that parents tell.

But what if they weren't lying?

Have you heard of the mellified man? There is a story, possibly apocryphal, that in 12th Century Arabia it was possible to buy the health food to beat all health foods. Rumoured to cure all ills, it was the Aspirin of the day. Patients would be administered spoonfuls of mellified man to cure:

Sounds Good. Where can I buy some?

Well, you probably can't buy some today and you aren't really likely to want to either.

Tell 'em About the Honey, Mummy

Mellified man was made thus: when an old man was reaching the end of his life and especially if he had reached a ripe old age, the local medicine man (or woman) would approach him with a proposition. Possibly offering some recompense to the family, possibly offering a reward in the hereafter, he would be invited to join an early Organ Donation Service with a difference. He would be instructed to give up food and start eating only honey. Honey for breakfast, honey for lunch, honey for tea and honey for supper. Sometimes they even had honey for elevenses. Not satisfied filling up with the golden stuff, they even bathed in it. Soon, alongside the cries of 'No more blinking honey, please', the old chap would start to exude honey in his urine, faeces and sweat. If the film 'Bus Stop' had been relocated in time and place and Marilyn Monroe had been an ancient Arab, (OK, tenuous), she may have been heard to explain in a Deep South twang: Why I'm so old I'm spitting honey.

Needless to say, this early 'Bee-Plan' diet would end up killing the practitioner. Once expired, the body would then be placed in a casket filled with honey, sealed up and stamped with the year and month (giving it possibly the world's first sell-by label). The casket would then be left for up to a hundred years. When it was finally opened, what was inside had turned into a thick gloop. Probably with crunchy bits. The gloop was ladled into jars and sold as a health tonic. Allegedly available up to the 1900s and even found in Paris, the mellified man is likely to be a variation on the Egyptian tradition of mummification. Mary Roach writes in her book Stiff: The Curious Life of Human Cadavers1 that she found the recipe included in Chinese Materia Medica put together by Li Shih-chen, a naturalist, in 1597. He did, however, add that he was unsure of its authenticity.

Perhaps this may help understand the saying 'A spoonful of honey helps the medicine go down.' Was it really just honey on that spoon?