The History of English Black Powder and Gunpowder Content from the guide to life, the universe and everything 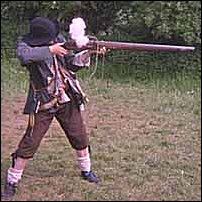 The first thing to state about black powder is that, like the wheel, no one knows who invented it. Many have claimed the invention but it has been decided that on balance it was the Chinese or the Arabs, probably both, independently of each other. The first invention was black powder, which was developed during the period between 890 to 1050 AD, and was refined into gunpowder in Europe after the development of firearms. Paradoxically it was returned to China and Arabia in its improved form by the European invaders.

Did the Oxydracae Have Firearms?

It will no doubt strike the reader with wonder to find a prohibition of firearms in records of such unfathomable antiquity; and he will probably from hence renew the suspicion which has long been deemed absurd, that Alexander the Great did absolutely meet with some weapons of that kind in India.

Francis Bacon 1561 - 16262, had read this document as he mentioned it in his writings and he states that the Oxydracae in 327 BC, had black powder weapons and had established a prohibition order in law. Alexander penetrated India as far the Indus valley so the Oxydracae lived between here and the Himalayas. So did the Indians invent black powder and the handgun? European history records that handguns were in use before the Battle of Agincourt, fired from the walls of Sterling Castle in 1304.

There is little doubt that it was the Europeans who first saw the possibilities of the substance and exploited it to create empires.

The European Development of Gunpowder

First an explanation of the transition from black powder to gunpowder and the difference between the two:

Gunpowder works by burning the charcoal very quickly in an oxygen-enriched environment; this produces a huge volume of combustion gas building up a pressure to the equivalent of 45 tons per square inch (up to three times the power of black powder). The oxygen is created from a chemical reaction between the saltpetre and nitrate, present in higher proportions in gunpowder; this allows the projectile to be fired from a gun at a much more rapid velocity.

The earliest European formula for black powder was simple, it was three portions of equal weight potassium nitrate, (also known as nitre or saltpeter3), charcoal and sulphur. The propellant power was poor and the handguns had to be fired at short distance, which meant gunners were in the range of archers, and an easy target.

Later formulas for gunpowder increased the potassium nitrate to about 75%, charcoal 15% and the sulphur to 10%, giving more power to the mixture.

The difficult and dangerous part of the process was in the mixing - the ingredients were not just mixed but ground tougher. To achieve this while staying alive, it was found best to mix the constituents wet. They were mixed with wine or water and they could be ground down to a fine paste. The resulting paste was known as 'serpentine' which was pushed through a mesh to form granules; these were allowed to dry, pressed into blocks for ease of handling, passed through a mill to produce a powder, then other mills to make a finer powder still.

In England, friar Roger Bacon born at Ilchester, Somerset (1214 - C. 1292), who was an alchemist among other things, was the first in European records to publish the formula for black powder. This caused many to assume he had invented it, even though Bacon stated in his writings that the substance was known in many other places. Bacon later refined the formula for gun powder, and in Germany Albertus Magnus (1206 - C. 1280), came up with a mixture with 66% potassium nitrate and 17% of charcoal and sulphur. This was the formula that was used on the first guns, as it produced more power to propel the missile.

Although gunpowder is what we use today in firearms, the term black powder although incorrect, has stayed with us as a general term of description.

The first place where gunpowder was produced appears to have been the Tower of London; the ingredients were imported by sea and the powder made in the tower was stored within its walls. Called the 'powder house', the Tower also acted as a supply depot for the area. From 1518, the ordnance storehouses and Royal Dockyard were located at Rotherhithe on the Thames. In 1671 they were moved to their present site at Woolwich, where production started in 1696.

The first private powder mills in England were opened in 1544 at Rotherhithe on the Thames. The English gunpowder industry was cantered upon the area of Kent and the South-east of England; this coincided with the concentration in this area of the army and naval forces. There were powder mills all over England but few recorded. One however was listed as on 27 April, 1603, at Radcliffe near Nottingham, due to an explosion killing some workers. The King actually heard the noise of the explosion several miles away at Burghley house where he was staying. Another powder mill was opened in the year 1794, named 'The Royal Gunpowder Mills', and located at Ballincollig in Co. Cork, Ireland on the banks of the river Lee.

The oldest surviving gunpowder works in the world are the Chart Mills in Faversham, Kent, in England. Established in 1560 by a private company and nationalised in 1760, production at this factory went on for 400 years and supplied powder for battles including Trafalgar and Waterloo. The manufacturing process in all the factories was similar; the mixing or incorporating was the most important of the 11 stages that included sieving, grinding, compressing and grading4. The better the process the more evenly the powder burned and therefore the better the powder. Chart Mills was powered by two water wheels and had four separate production mills.

As it might become vulnerable to air raids, it was closed in 1933 whereupon the buildings of the factory fell in to dilapidation. It was later rescued by the Faversham society and is now restored to working condition.

This factory was a mile to the west of Faversham, founded in 1690 by Huguenot refugees near the village of Oare from which it took its name. With a working life of over 250 years, at its closure in 1933 (for the same reasons as Chart) it was employing 300 people. It is now fully restored as part of Faversham's heritage and open to the public. Until the arrival of the railways the gunpowder produced in the area was shipped from the port of Faversham.

A Move to Scotland

Due to WWII both Kent factories were closed by 1934. Production, some machinery and staff were transferred to Ardeer, near Saltcoats, in Ayrshire, Scotland.

This was the oldest of the three sites and it started life as part of the Waltham Abbey built by the monks as a fulling or tucking mill5. After the dissolution it had several uses. In 1660, there was a shortage of gunpowder, and the mill was initially converted by a Ralph Hudson to produce powder for the Dutch Wars; the saltpeter supply coming from Bedfordshire and Hertfordshire. The mill's convenient location only 18 miles from London made it ideal and it became the largest in England, employing 6,500 workers during WWI. During WWII this factory stayed open until 1943, even though it was vulnerable to air raids. Opened again in 1945 for research, it finally closed in 1991, after 300 years' production. It was celebrated in verse composed to be painted on the face of the factory clock:

On John Walton and his Gunpowder Mills,
As portrayed on Mr Bridges's Clock
A Mill for making of Gun-powder's there,
And Water flows amazing and more rare;
Which from a model on River's took
Of worthy Walton's Works; (whose soul can't brooke
With thing that's mean; but like a generous Heart,
Encourages all learning, Honesty, and Art).
- Philotechnos (a local poet, 1735)

As time progressed the demand for gunpowder dropped, and the production of the mills changed to the new cordite, gun cotton and TNT trinitrotoluene (tri-nitro-toluene, hyphens added for clarity) for military use; production continued until the factories closed.

To give an example of the dangers involved in the production of explosives6 the following incident was the worst explosives accident in England. It happened at the Chart Mills in Faversham, on Sunday 2 April, 1916. During the process of loading a train in a depot at Uplees near Faversham, a fire broke out in some discarded packaging. At 2:30 pm the fire set off 15,000 kg of ammonium nitrate and 1,500 kg of TNT. The force of the explosion was so great that windows in Southend, over 40 miles away were blown out and the explosion was felt in Norwich 150 miles away. The hole in the ground was 20 metres deep and over 40 metres across, and sadly 109 men and boys were killed.

There is a growth in interest in historic firearms in both Europe and USA. Also, there are many societies formed to keep history alive and to re-enact historic wars and battles.

There has also been a revival of the use of gunpowder for sporting guns; this has happened mainly in USA due to the strong hunting culture and the more relaxed gun laws. There are even hunting societies that are exclusively using black powder.

This has meant that the development of gunpowder has continued and is still improving. Gunpowder, far from being consigned to history, is not only alive and well, but doing very nicely.

1The Persian Empire lasted from 559 to 238 BC.2Samuel Johnson in 1776 also possessed a copy of A Code of Gentoo laws.3The original source of this was human or animal urine.4This involved sorting the powder into coarse (less time grinding) and fine granules, depending upon the intended use.5Fulling is part or the process in the production of woollen cloth. This is a method of cleaning the cloth by pounding with fullers earth.6By the 1900s the military were using nitroglycerine and cordite for explosives. These were still made at the old gunpowder mills.