A Guide to Basic Chords Content from the guide to life, the universe and everything 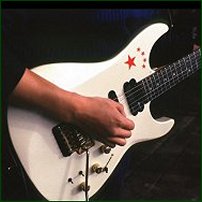 In music, a chord is a group of notes played together, or separately, also known as a broken chord or arpeggio. Chords form a pretty important part in music, as much of it, particularly jazz and pop, is based around sequences of certain chords. There are rather a lot of different varieties of chords, but this Entry is just going to deal with a few of the most basic and important chords that are most commonly used.

To help explain chords better it is necessary to digress and explain scales, whole tones and semitones (also known as whole steps and half steps in America). The formula for a major scale is:

We will use C as examples for everything discussed here. The C major scale is:

A major triad (a fancy term for a three-note chord) is made using the first, third and fifth notes of a major scale. So in the case of C, a C major chord would be C E G. This is in the root position, as the lowest note is the name of the chord. Now, a chord doesn't necessarily need to be arranged in this order. If desired, you can use the first or second inversions which would be E G C and G C E. Major chords sound light, or 'happy'.

Minor chords are made by taking the major chord in the root position and lowering the middle note one semitone. So a C minor chord would be C Eb G. Minor chords are known for sounding sad or dramatic, the opposite of majors.

These are also four-note chords and are a bit more complicated. In a major scale, in this case C, the first note will be the starting note of the scale. Then add three more notes, each one three semitones above the previous note. So Cdim or C° would be C Eb F# A. Believe it or not, there are only three different diminished chords, and each one has four different names, coming from the names of the notes used. C°, Eb°, F#° and A° are all the exact same chords. Diminished chords have a very distinctive sound, which you will recognise if you have ever seen really old horror movies, as diminished chords have a 'scary' sound.

Note: You know that famous opening chord of the Beatles song 'A Hard Day's Night'? That is a variation of a suspended chord: G7sus4 to be exact. The notes are G C D F. The G major is G B D; the suspended fourth replaces the B with a C and the F is added to give it the seventh sound.

Augmented chords are fairly simple: take the major chord in the root position and raise the third note of the chord one half step: C augmented, or sometimes written C aug or C+ would be C E G#.

These are made simply by adding the sixth note of the major scale to the major chord. So a C6 would be C E G A. Cmin6 is C Eb G A.

Ninths are made by taking the major chord in the root position and adding the flatted seventh plus the note four semitones above that. So a C9 would be C E G Bb D.

How Chords are Used

This follows the simple formula:

Making one of these progressions can be done by picking a major scale and playing the chords for each of the notes, following the major minor minor etc formula.

Songs are not necessarily limited just to this sort of progression, as you can substitute some of these chords for others. But a song will have at least some of the chords that are in the progression.

On a piano, chords are usually played with the left hand on the bass notes, accompanied by the right hand playing the melody. Sometimes the melody notes are turned into chords to make it sound more defined. When this is done, the melody note has to be the highest note in the chord.

On guitars, chords are played with the fingers holding down strings between particular frets, and then strumming along. In bands, unless the piano or guitar is actually supposed to play the melody, they usually just pound out these chords along with the rest of the music.

1Starting note, it doesn't count as a step.