'Escape Into Night' - The Television Series Content from the guide to life, the universe and everything 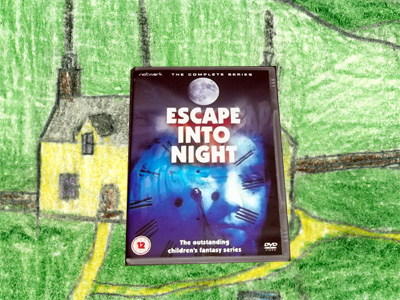 It can be argued that, for a British child growing up the early 1970s, there was little to look back upon with fondness. Oil crises, the rise of the IRA, power cuts and the three-day week — and those were only the things the adults had to deal with. There was scant relief for the kids either. Even television offered little in the way of quality escapism — you only have to look at the schedules to see this. Children were very much second-class citizens where programming was concerned. Even the BBC dropped the ball: its mission to entertain and educate seemed to only half-apply to children, stopping with factual programmes such as Blue Peter.

The homegrown dramatic programming for children was pretty derisory. To paraphrase Dr Johnson, there was plenty that was good and original, but very little that was both good and original. When they weren't served up with a derivative, formulaic and vastly over-rated animated import such as Scooby-Doo, it was a fairly typical tactic to fob kids off with any decomposing nitrocellulose lying around in the film vault. They had to make do with ad nauseam repeats of once-worthy antiquated imported serials in black and white, featuring either Pyrenean mountain dogs1, white horses2 or Robinson Crusoe — or, if the schedulers were feeling especially vindictive, a whole run of 1930s Saturday morning cinema serials such as Flash Gordon performed by an ensemble that should have been inspected beforehand for termite damage. Nostalgia certainly isn't what it used to be, at least as far as television is concerned.

Nevertheless, there were some bright spots in this benighted decade of televised dramatic dreck. Get together a dinnerparty of fortysomethings and during the post-prandial conversation, if the subject of kids' television comes up, there is one series that seems to stick in the mind. In fact, anybody who has seen it is destined never to forget it until their dying day. This was groundbreaking children's programming at its most innovative and challenging, showing that even cardboard sets could become places where nightmares became real - and we have not the BBC but an independent company to thank for it. The name of the series - Escape into Night - and its plot may be long forgotten, but the images remain indelibly burned into the memory.

In 1958, Catherine Storr, a noted children's author, wrote Marianne Dreams. Marianne, a young girl, is bedridden with a long-term illness. The novelty of being off school has worn off and now boredom has taken its place. She has stopped being a sunny little girl and is now a gloomy and depressed one. So Mum, who has tried virtually everything she can to amuse her daughter, fetches the trinket box for her to play with. Marianne finds a pencil in it she hasn't seen before. A short, stubby pencil, it looks nothing out of the ordinary, but for some reason Marianne is attracted to it, and she starts to draw.

Her first picture is of a house and garden near a cliff edge, with an unhappy-looking boy at the window. When she falls asleep that night, she starts to dream about the house and boy, who in the dream is called Mark. He is bedridden himself, as his legs are paralysed: Marianne neglected to draw his lower body. She then finds that anything she draws she subsequently dreams about, and draws a stairway to reach Mark on the upper floor of the house. Moreover, the pencil is indelible: once drawn, nothing can be erased.

Mark, though, is anything but a figment of the imagination. He exists in the real world and is a pupil of Marianne's home tutor, who teaches several ill children so that they don't fall behind at school. Mark has had an attack of polio and is still very ill. When Marianne tells the tutor how she knows him, she recoils in astonishment.

Meanwhile, gloomy but recovering Marianne and depressed but critically-ill Mark are having anything but a dreamlike relationship when they meet each night. After one of their frequent arguments, Marianne draws thick bars across the windows of the house so he cannot escape. She then draws huge boulders around the house to form a barrier and then, in one decisive action, draws a baleful green unblinking eye on each boulder so they can watch him during the night. When she is subsequently transported back to the house, she looks out of the window to see the boulders, called Watchers, creeping up on on the house during the night, muttering and hissing as they so do.

Eventually, Marianne and Mark escape the house when she draws a bicycle for Mark to strengthen his legs with. She then draws a lighthouse, the beam of which blinds the Watchers for long enough to allow our two heroes to run past. The series ends on a cliffhanger, with one of the living rocks hissing 'The light!' as the children make their dash for freedom.

If you think this sounds like a sure-fire recipe for chronic bedwetting, you'd be right. So it would be a brave — or visionary — commissioning editor who decided to make this into a television series for pre-teen children. Ruth Boswell was just such an editor. She was the head of the script department at the now-defunct ATV and had several well-known (and highly-regarded) children's television series to her name, such as Timeslip: a typically low-budget series that nevertheless had high production values and didn't talk down to children. Storr's original book dealt with uncharacteristically dark and weighty themes for such a production, such as mortality, sickness and facing up to your own fears. Mark, for instance, is weakening seriously, so as the rocks approach Marianne realises that they must escape the house before their dreams end or they will both die.

Boswell pitched the idea of adapting the book to Alan Coleman, Head of Children's Drama at ATV. He agreed and they secured Richard Bramall as director. Marianne and Mark were played by two newcomers, Vikki Chambers and Steven Jones (Chambers went on to become a presenter on BBC Birmingham). The adult cast included Sonia Graham and Patricia Maynard. The dark ambience of the production and the eerie, atonal singing that saw out the closing credits accompanied by Marianne's sketches reinforced the all-pervading air of menace.

The series was made in colour, but all six episodes now exist as black and white film and has been released on DVD. It obviously made an impression upon the film director Bernard Rose, who in 1988 made Paperhouse and in so doing created an entirely new genre, the children's horror film. It was somewhat less faithful to the story: Mark lives in the lighthouse and dies at the end, being carried away in his dream by a helicopter drawn by Marianne. But its much bigger budget allowed other plot elements to be explored, including the terrifying arrival of a blinded, insane father.

The composer Andrew Lowe-Watson was another one of those adults affected by the story and he decided to turn it into an opera named after the book. He contacted Storr through her publisher and discovered that she was keen to write the libretto. This was completed before her death in 2001 and the opera was performed at the Sadler's Wells Theatre in 2004 to favourable reviews.

Boswell, mercifully, moved on to less threatening teatime fare, such as the Molly Wopsies and The Tomorrow People, but the damage was already done. Apart from the composers and film directors, there are many adults who are still haunted by this weird, menacing, very much one-of-a-kind exercise in children's programming. Just ask any psychiatrist.

1Belle and Sebastian.2Funnily enough, this was called White Horses.