Maxim Vengerov - Virtuoso Violinist Content from the guide to life, the universe and everything 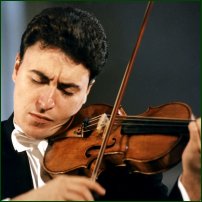 Maxim Vengerov, born in August 1974, is considered by many to be the greatest living violinist. He began to play the violin at the age of four in his home town of Novosibirsk, Western Siberia, and made fast progress. He was taught initially by Galina Turtschaninova and later studied with the famous violin pedagogue, Zakhar Bron. At the age of five he played his first recital, and by seven had completed his first concert performance playing the Bériot Concerto No 9 with the Novisibirsk Symphony Orchestra.

Much lauded in his native Russia as a prodigy, he made his western breakthrough in 1990 when he won the Carl Flesch violin competition in London. Since then, his career has included performances on all continents, with all the major orchestras and with many leading chamber musicians.

His recordings are numerous and include award-winning interpretations of the Shostakovich and Britten violin concertos. His recent recording of the Beethoven violin concerto, with the London Symphony Orchestra and Mstislav Rostropovich, split the critics into two camps due to the unusual tempo chosen. He has performed Bach and Corelli on the Baroque violin, most famously on tour with Trevor Pinnock - a leading harpsichordist. In 2000 and in 2002 he undertook a solo tour playing unaccompanied sonatas by Ysaye, Paganini and Bach.

Maxim's violin of choice is a Stradivarius. After playing three loaned Strads in his career to date he now owns a 1727 Stradivarius once owned by Rudolph Kreutzer (after whom Beethoven famously named a violin sonata). He also plays viola occasionally, and has been known to improvise rock music on his electric five-string fiddle.

After first surprising the Hanover audience in 2005 with his improvised rock cadenza in the premiere of the Yusupov concerto, he completely stunned them as he finished the performance by dancing the tango. He has also been appointed as a UNICEF special envoy and works with them on projects for disadvantaged children throughout the world. He teaches violin, and in 2005, after an appointment at the Musikhochschule in Saarbrucken, he began an appointment as visiting professor in violin at London's Royal Academy of Music . He gives innovative master classes where he builds on imagery and emotion, rather then technique, to bring out the musicality. He has conducted orchestras in symphonic works as well as leading from the violin in some concertos such as Beethoven and Mozart. And, of course, he is an amazing musician with a charismatic stage presence.

How to Hear Him Perform

Maxim performs a punishing concert schedule worldwide, and the chances are he will be playing in a concert somewhere within travelling distance during the year. He tends to perform in Europe mostly but makes almost annual tours to North America and the Far East. The rest of the world may have to wait a while longer. In London he can be heard regularly at the Barbican and he often performs at the Radio 3 Proms festival. Book early though, as concerts generally sell out well in advance.

You can of course listen to him in the comfort of your own home without the hassle of travel, if you are content with CDs and radio as the next best thing. Some live concerts are broadcast on the radio and can be heard online, for example on BBC Radio 3

For more information, an Internet search will unearth many sites such as this fansite which has up-to-date concert schedules, full CD listing, and links to audio and video clips.