Joan Hickson - Actress Content from the guide to life, the universe and everything 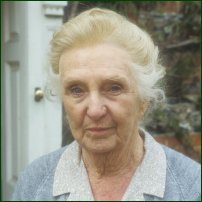 I was lucky not to have been born pretty.
- Joan Hickson

Born on 5 August, 1906 in Kingsthorpe, Northampton, Joan Hickson began a long and successful acting career in 1927, appearing on stage as well as on the small and big screens. She is undoubtedly most famous for her appearances in the television adaptations of Agatha Christie's Miss Marple, providing a depiction of the elderly sleuth unrivalled by any other before or since.

At the age of five, Joan was taken to see Cinderella at the local theatre. She was left speechless for days, but then told her family that she wanted to go and live next to the theatre so that she could act whenever she wanted. Joan's career began in 1927 with parts at provincial theatres1, and she soon gained fame for her ability to play comical and often slightly eccentric characters. She then went on to appear in London's West End, and soon had her first film role in 1934 in Trouble in Store, a 39-minute comedy short. It would be a while before Joan had a major role on-screen, and while she continued to have supporting roles in a number of films, she concentrated more upon her theatrical acting career. Amazingly, Joan appeared in a play at the Regent's Park Open Air Theatre during the Second World War while London was being bombed continuously by Germany.

An important moment in Joan's career came while she was appearing as a spinster in the 1946 stage version of Agatha Christie's Appointment with Death. Although the play was based upon a Poirot novel in which a murder occurs while Poirot is on holiday in Jerusalem, leaving him with 24 hours to solve it, Christie's stage adaptation didn't include Poirot at all, and changed the identity of the killer. After seeing Joan's performance in the play, Agatha Christie sent a note of congratulations backstage with the postscript:

I hope one day you will play my dear Miss Marple.

Though Agatha Christie's wish was to come true one day, it wasn't to happen just yet. However, Joan started to appear in more major roles on the big screen, the first of these being The Guinea Pig in 1948, having earlier appeared in the stage version at the Criterion Theatre. Starring alongside a comparatively young Richard Attenborough, Joan played the part of his mother in a film which examined Britain's class system at the time through the metaphor of the public school. Her film career continued with appearances in Seven Days to Noon in 1950 and The 39 Steps in 1959. She also appeared in the television series Our Man at St Marks and The Bell Family, the latter proving to be one of the most successful Children's Hour productions ever.

Joan went on to prove her comedic abilities by appearing in several of the Carry On... films, ranging from Carry on Nurse in 1959 to Carry On Girls in 1973. One especially humorous moment comes in Carry On Girls, where Joan plays old battle-axe, Mrs Dukes, whose underwear has been hoisted up the flagpole, leading her to shout at Jack Douglas:

Young man! I want you to take my knickers down!

All in all, Joan appeared in over eighty films before becoming famous on television, with one of her later film roles being that of Mrs Rivington in the 1981 adaptation of Agatha Christie's Why Didn't They Ask Evans?

Despite making many film appearances, Joan continued her stage career with great success. After appearing in a trio of plays by Peter Nichols, Joan played Mrs Bradman in the 1976 National Theatre touring production of Noel Coward's Blithe Spirit. Next, she played Delia in Alan Ayckbourn's Bedroom Farce, also at the National Theatre. The play then moved to Broadway, with the role winning her the 1976 Tony Award for Best Featured Actress in a Play.

Joan was first involved with the world of Miss Marple in 1961, when she appeared as the housekeeper in Murder, She Said, a loose film adaptation of the novel 4:50 from Paddington starring Margaret Rutherford as Jane Marple. While she played the role delightfully, Rutherford came nowhere near to depicting the Miss Marple of the novels. Rutherford went on to cover a handful of Miss Marple stories on the big screen, although the plots generally varied quite considerably from those written by Agatha Christie. >Angela Lansbury had also made an appearance as Miss Marple in the 1980 film The Mirror Crack'd, based upon the novel of the same name

In 1984, however, Joan starred in the first of an on-going series of TV adaptations of the Miss Marple series and in the process her interpretation of the role became what many consider to this day to be the definitive Marple.

In her later life, Joan herself showed a few similarities with the great detective. She spent the last part of her long career enjoying village life in Wivenhoe, Essex, where she lived on Rose Lane and proved very popular with her neighbours. Though in similar surroundings to those of Miss Marple's village of St Mary Mead, Joan is reported only to have 'played herself', something at which she would most definitely have excelled. Joan's husband, the physician Eric Butler, had died back in 1967, leaving Joan as a widow with a son and a daughter. For this reason she was known to the locals as Joan Butler, only using her maiden name for stage purposes. Joan enjoyed a good holiday as much as Miss Marple, apparently holidaying in Sidmouth, Devon on several occasions. Unlike the fictional sleuth, whose demise was not recorded in any of the novels, Joan finally passed away due to natural causes in October 1998, at the age of 92.

1A provincial theatre is one outside London's West End.