Beethoven's 'Moonlight' Sonata Content from the guide to life, the universe and everything 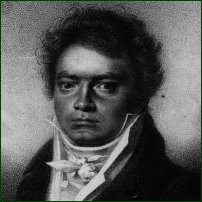 Probably one of the most famous classical pieces ever for piano, this can be instantly recognised by almost anyone.

It was written by Ludwig van Beethoven (1770 - 1827) in Hungary in the summer of 1801, during the early stages of his deafness, and was published in 1802. He wrote it for and dedicated it to his young student at the time, 17-year-old Countess Giulietta Guicciardi. After just a few lessons, they fell in love and it is believed that Beethoven proposed to her. She apparently accepted, but her parents forbade the marriage. The Countess later wed a Count Gallenberg. Beethoven was never married otherwise.

The original title for the 'Moonlight' Sonata is 'Quasi una Fantasia' meaning 'almost a fantasy'. It is Piano Sonata No. 14 in C# Minor, Opus 27 No. 2.

However, the name 'Moonlight' Sonata was coined some years following Beethoven's death. In the 1830s, German poet and music critic Heinrich Friedich Ludwig Rellstab thought that the song reminded him of how the moonlight reflected off of Lake Lucerne, in Switzerland. 'Moonlight' Sonata has since been the 'official unofficial' name.

A 'sonata', which is derived from the Latin word sonare meaning 'to sound', refers to a piece of music that is made of two to four different parts, or 'movements'. The 'Moonlight' Sonata falls in the category of 'Classical Sonatas' as it was written between 1750 and 1830.

Sonatas are to be played by one or two instruments. The 'Moonlight' Sonata is usually played on one piano, and is made of three movements:

Learning to Play the Song Yourself

The 'Moonlight' Sonata is an amazingly beautiful song, if you are into that sort of thing. It can be very sad and moving. If there is one thing you can do to enjoy the song even more, it is to learn to play it yourself. If you can play the piano, it is recommended to learn it; you will get so much more out of it than just by listening to it.

The First Movement, for instance, is relatively simple to play; it is mostly single notes in the melody and octave bass notes for the left hand. Though it can get confusing at times, due to the many accidentals1. However, keep practising and you will get the hang of it. Sheet music for the song can be found here.

The 'Moonlight' Sonata is often favoured for use in suspenseful or emotional scenes in movies and television. Here are a few examples:

Inspiration for the Beatles

The Beatles' song 'Because', from their 1969 album Abbey Road, is based on the 'Moonlight' Sonata. John Lennon got the inspiration when he was listening to his wife, Yoko Ono, playing the First Movement on the piano. He asked Yoko to play the chords backwards, she did, and he then wrote 'Because' along with these backward chords.

1This is the term for notes that are not in the key signature. For instance, in places, the song uses a C natural instead of a C sharp, or an F double-sharp, which is also a G natural. This can get confusing if you are not paying close enough attention.