Rich Hall - Comedian and Author Content from the guide to life, the universe and everything 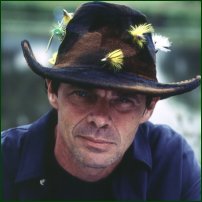 Rich Hall has used hundreds of names over his career, only two of which were actually his. Most were given to hurricanes or created as sniglets1, and one was the name of an American convict with an award for excellence from a bottled drinks company. One, the one he used most, was that of an American comedian and occasional author. This is his story.

Rich Hall was born in North Carolina, USA, in 1954. Hall's biography on the Off the Kerb2 website explains that he 'quit his job as a hurricane namer for the United States Meteorological Service 18 years ago', although it rather unhelpfully fails to point out what year this information was written, making it semi-useless as a result. Generally, details of his early life are few and far between. It seems he drifted into street performing in order to pay off his student debts, with his original street act being based around getting people to act out horror films. By this stage he had already worked on a newspaper and would go on to commentate at donkey basketball games3. He even claims to have faked his own death in order to avoid paying back his debt. He would then go on tour with his stand-up act as a support act for the Talking Heads.

By 1990, Hall had been in comedy for 11 years, according to an interview at the time. In the early 1980s, Rich had begun to achieve success on television, and from this point onwards, tracking his life becomes slightly easier. He appeared as writer and/or performer on the sketch shows Not Necessarily the News4, Fridays and Saturday Night Live, the latter being a springboard for many other American comedians who aren't going to be shamelessly namechecked here. It was on Saturday Night Live that Hall would develop his sniglets, sharing his ideas with the audience in a regular segment of the show. This single idea would lead to five volumes of sniglets5 as well as a sniglet game and calendar. As if this cultural contribution wasn't enough, Hall is also widely reported to have been the inspiration for bartender Moe Syzlak on the TV cartoon The Simpsons.

His other TV credits include regular guest spots on The Conan O'Brien Show, and he both appeared on and wrote for The David Letterman Show, winning two Emmy Awards in the process. He also got his own TV Special Vanishing America6 and his own series, Rich Hall's Onion World, on The Comedy Channel, both in 1986. He also wrote Self Help for the Bleak in 1994 and would write a novel, Things Snowball in 2003. None of this, however, prevented him from peering thoughtfully across the Atlantic Ocean, wondering what might be on the other side.

'Well I'm an American and... I'm sorry for everything'
- Rich Hall

In the nineties, Rich Hall started to work more and more in the UK. 'I started coming to the UK and Edinburgh, and found there was more appreciation of what you had to say, in the spoken word itself,' he once told an interviewer. He enjoyed considerable success in Great Britain, where he would become a regular panellist on comedy programmes such as Have I Got News for You, Never Mind the Buzzcocks and QI, all for BBC2. While his TV work in America was limited, British TV found almost endless screen time for the sardonic American stand-up. Having been a guest on a number of TV shows, including a regular slot on Jack Dee's Sunday Service, Rich would get two series of his own in the UK, making Rich Hall's Fishing Show for BBC4 in 2003 and Rich Hall's Cattle Drive for the same channel two years later. Rich also enjoyed success on television in Ireland7 and in Australia8 as well as appearing at Ireland's Kilkenny 'Cats Laugh' Comedy Festival and the Melbourne International Comedy Festival in Australia. It was, however, at the Edinburgh Festival that he would launch his next career move.

Otis Lee Crenshaw, Hall's convict alter ego, and supposedly his uncle, emerged at the Edinburgh Festival in 2000. He was an instant success, picking up the 2000 Perrier Award for his performance alongside a regular band, The Black Liars. This would be followed in the same year by a Time Out9 Comedy Award, and an Adelaide Fringe Festival Award. In 2001, Otis made his video debut with his show London, not Tennessee filmed at London's Comedy Store. In 2004 Otis released his autobiography, I Blame Society.

The act itself showed some echoes of Rich himself. Both shared a love of country music and an antipathy for its modern forms ('That Garth Brooks can kiss my a**') and even, on occasion, shared the same gags. The general composition of the act meandered through Otis's life ('My old man's name was Jack Daniels Crenshaw, no surprise what he liked to drink'), with songs covering a variety of subjects such as his Love Song 'Do you Remember? (Well I don't, 'cos I was drunk)' and his white trash ode 'Trailerland'. Some of his songs, such as 'Uncle Muncie' which is about child abuse, will probably prove too offensive or too dark for some, but much of his material is extremely strong and the reason for his repeated success is obvious, even as he improvises 'Big Dennis' about a member of the audience ('There ain't a whole legacy of folk songs about office managers, is there Dennis?').

Having invented words, changed identities and covered more ground than any hurricane he cared to name (and the number he cared to name is not a matter of public record), has he done enough? Is there more to come from Rich, or from Otis, or from anyone else he has up his sleeve? 2006 saw the addition of yet another string to Rich's bow, once again introduced at the Edinburgh festival, where his dark and most definitely not comic play, Levelland - which he wrote and stars in - made its debut. Levelland portrays America in the not-too-distant future, where oil prices have reached $10 a gallon10, a young man emerges who claims to be able to divine oil. His fans will hope that his pattern of constant and successful reinvention continues, but he has to stop somewhere. Maybe it will be next year, maybe not.

1A 'sniglet' means a word that should be in the dictionary, but isn't. For example 'Execuglide: The act of using your wheeled office chair to move from one place to another'.2Hall's management company.3This involves people playing basketball while riding donkeys. What were they thinking?4 The American version of the UK sketch show Not the Nine O'Clock News.5Sniglets (Snig'Lit : Any Word That Doesn't Appear in the Dictionary, but Should) (1984); More Sniglets: Any Word That Doesn't Appear in the Dictionary, but Should (1985); Unexplained Sniglets of the Universe (1986); Angry Young Sniglets (1987) and When Sniglets Ruled the Earth (1989).6Rich sets off on a journey across America, only to find that there's not much of it left. Rich also wrote a Vanishing America book in the same year.7Where he appeared on the topical comedy show Don't Feed the Gondolas.8Where he appeared in Comedy Panel shows such as The Glass House and Spicks and Specks.9In case you didn't know, Time Out is both a chocolate bar and a magazine, although only the magazine regularly hands out awards.10Or £1.45 a litre, if you're in the UK, this being around 50% more expensive than prices in 2006.