Monmouthshire: A County, but English or Welsh? Content from the guide to life, the universe and everything 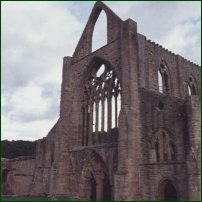 Utrique Fidelis
'Faithful to both' - the County motto.

The odds are, if you asked 100 well-educated people to tell you the national status of Monmouthshire, 99 would fail. In its long and extensive history it has been a county, borough, and Unitary Authority in Wales; it has also been part of the Welsh county of Gwent, part of the English county of Herefordshire, and an English county in its own right. It has held complex allegiances with both Wales and England over the five hundred years of its existence. No wonder it is a confusing place.

When the Normans invaded England, they built a line of castles along the Welsh border in order to keep the barbarous Welsh at bay. In doing so, they unwittingly instigated centuries of debate and rivalry. The most important castles stood in what was to become Monmouthshire, and it led to the creation of an uneasy 'boundary' region: Welsh land manned by English soldiers.

Geoffrey of Monmouth helped put his hometown on the map. The clergyman and chronicler of the Arthurian legends was probably born in the ancient market town, long before the county existed. It is thought that Geoffrey was of Celtic origin, and much of his work contains Celtic influences. No doubt he would have considered his hometown to be Welsh.

If only the rest of Britain could have been so sure. For several centuries the Welsh Marches (the region along the Anglo-Welsh border) were ruled by the Lords Marchers and did not declare allegiance to either side. The Marches were strategically important, not only in fending off the 'barbarian' Celts, but also for control of the wool trade in medieval Britain.

It was not until Henry VIII's Acts Of Union, in the 16th century, that the Marches were declared separate counties and part of England. Henry VIII's desire to gain control over the political stronghold of Tintern Abbey was a clear contributing factor: this was the time when he was dissolving the catholic monasteries. Unsurprisingly, the monks at Tintern held out against dissolution for some time; in doing so, virtually declaring themselves to be Welsh.

The Crown thereafter appointed an English ruler over Monmouth, clearly noting the county as one not to be trusted. James, Duke of Monmouth, a thoroughly unsavoury character, spent many years plotting to overthrow the protestant monarchy in the 17th Century, and was beheaded in 1685 for his efforts.

During the Renaissance, Monmouthshire was geographically English but sentimentally Welsh: a direct contrast to the situation today. Acts of Parliament for many centuries referred to 'Monmouthshire and South Wales'1 as one, and as late as the 1960s various parts of the county claimed to be Welsh, where others were steadfastly English. The erstwhile county town of Newport could technically have been considered English right up until 2002, when it was granted city status and became Wales' third city. Newport, confusingly, is now part of the county of Gwent.

Gradually, the tide began to swing towards the west. When the Church of England devolved in 1920, Monmouth became part of the Church in Wales. The Welsh Office, created in 1964, included Monmouthshire. To all intents and purposes, Monmouthshire became Welsh. The Welsh language revolution of the 1980s and 1990s demanded the erection of dual-language road signs in the county, and many Monmouth towns had to revive (and, in some cases, invent) ancient Celtic names. The national divide is far from over: the English Democrats party intend to stand in all future Monmouth elections on the basis of letting the county decide its own allegiance.

Why Should I Go There?

With the highest density of castles in the country, and Caldicot and Portskewett on the banks of the Severn having yielded important Bronze Age finds, historians and archaeologists will find no end of fascination in Monmouthshire. Walkers and hikers will find glorious scenery in the Wye Valley. Keen shoppers are catered for in Monmouth and Abergavenny, and sport lovers have two award-winning attractions in Chepstow: the Racecourse and the PGA golf venue St Pierre. Above all, if you're English and want to feel at home in foreign fields, there is no place more accommodating than Monmouthshire3.

1The other Marches of Brecknock, Radnor, Montgomery and Denbigh having been incorporated into other counties.2The Hadrian's Wall of Wales: an earthwork barrier that has not well stood the test of time.3It probably should be added that this is only a matter of opinion.