How to Draw a Pentagram Content from the guide to life, the universe and everything 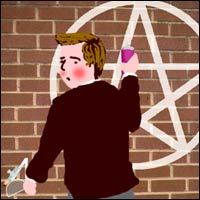 Have you ever tried to draw a pentagram? You know, the five-pointed star you see Christopher Lee drawing on the floor in old Hammer Horror films to summon up the devil? Or perhaps the more gentle one used by Wiccans for invoking the five elements in their rites? (Same pentagram: different use.) Ignoring magic all together, you might just like to draw a five-pointed star because it is a pleasing pattern. You've probably never drawn an accurate pentagram, with all sides equal and all angles equal. It's not as easy as you may think!

So, here are a few methods for accomplishing this task.

For this method you'll need a special tool - a protractor. All you need to do is draw a line of the desired length, then use the protractor to measure 36 degrees from its tip and draw another line of the same length. Repeat with the rest of the tips until you close the pentagram.

This method is nice and simple, but it's not very accurate. If you are a tiny bit out with the 36° angles, the whole thing will look rather crooked by the time you get to the last line. Who walks around with a protractor, anyway? (or even knows what this word means?)

The following method is based on a specific ratio that exists between the sides of the regular pentagon that form the centre of the pentagram and the sides of the triangles that make its points. This ratio is (1+√5)/2 to 1, which is approximately 1.618 to 1. This ratio, often called Φ or the golden ratio, is referred to here as P. You're probably going to need a calculator to do some of the calculations.

This is probably the best method for general use. It doesn't take too long, is easy to do and is easy to remember, too! It can also be used to draw stars with other numbers of points. You'll need a compass.

We're going to draw a circle and mark off five points on it which are evenly spaced around the circle. These points can then be joined to make the pentagram.

The Method of Many Circles

The following method is the most accurate, and doesn't involve any guessing, but it is quite tricky to do, and the reason why it works is far beyond the scope of this Entry. Again, you will need a compass.

An Ancient Greek philosopher by the name of Pythagoras believed that mathematics was at the root of all philosophy. He formed a band of followers who were sworn to secrecy and who investigated the properties of geometry. Legend has it that they adopted a pentagram inside a standard pentagon as their symbol. If you knew enough geometry to draw the symbol accurately, then you were in. Of course, only the method of many circles would have been good enough for such perfectionists.

1Often known as a 'pair of compasses'.