The Multimar Wattforum, a National Park Centre Content from the guide to life, the universe and everything 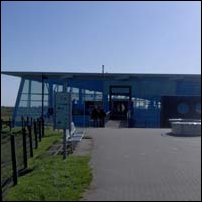 By displaying and explaining the area, its wildlife park was designed to build links between the needs of the nature reserve, the people who live and work on and near the North Sea, and the tourists, who guarantee income for the otherwise underdeveloped area.

Located near the river Eider in Tönning, Germany, it is an exhibition of all life-forms which can be found in the North Sea and especially in the Wadden Sea. The Multimar opened on 9 June, 1999 and attracts over 200,000 visitors each year. The exhibition is housed in two halls of 600 square metres each, with an extension being planned. A ceremony to mark the start of the extension project will take place in autumn 2006, and will hopefully be finished in 2008 at a total cost of €5.17 million, financed by the federal state of Schleswig-Holstein, the European Union, and the Nationalpark Service GmBH.

The ground floor of the Multimar Wattforum holds several fish tanks, showing over 250 species of fish, molluscs, crustaceans and snails. There are 17 special smaller aquariums, reserved for species which wouldn't easily be seen in the larger aquariums.

The aquariums are also used to breed wildlife: the thornback rays which emerged from their eggs 'at the beginning of 2005 are very popular with the visitors and earned the nickname of 'Angel Faces, due to their habit of clinging to the aquarium walls with their white under-sides, giving the impression of staring at the visitors. A small shark could be watched growing in its egg. The cuttlefish have grown so much that they'll have to be transferred into a larger aquarium soon.

Other aspects of the Park include a large basin displaying the cycle of the tides; laboratories where school classes can experiment and learn about life in the North Sea; audio-visual and hands-on exhibits; a restaurant (offering meals at reasonable prices); two children's play areas (indoors and outdoors), and, not to forget; a souvenir shop. The whole area is accessible by disabled people, providing lifts for those in wheelchairs, and guide material can be found either directly near the aquariums and other display objects, or in the form of a guide printed in braille for the visually impaired (at the information desk).

In the whale house in the basement, which opened in 2003, you can see the original skeleton of a 17.5m long sperm whale that became stranded on the North Sea beach near Rømø, Denmark, in 1997. One side shows the 157 bones whereas the other side is covered with a plastic layer, looking like the whale skin. There are ten different chambers related to the various stages in the life of a whale. In the 'whale cinema' you can watch short movies about whale hunting and other whale-related things.

The planned extension will concentrate on wider environmental issues, such as measures for the protection of the water, fishing and the development of the population or migrating fish. The new complex will contain a massive fish tank, a complex of water basins themed 'From the source to the estuary mouth', a Multivisions2 area, and a cold water facility.

If you are in the area and fancy a visit, be sure to check on the Opening Times and Entrance Fees before taking in the exhibition.

1The Wadden Sea Nationalpark Schleswig-Holstein is the oldest (founded in 1985) and largest (441.500ha) of the three German Wadden Sea National Parks, the other two parks belonging to Hamburg and Niedersachsen (Lower Saxony).2A multimedia area, with emphasis on the visual effects.