Mariah Carey - Singer/Songwriter Content from the guide to life, the universe and everything 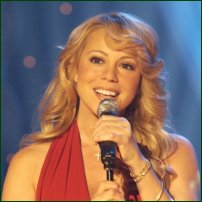 Mariah Carey was born in Long Island, New York, on 27 March, 1970, the third daughter of a white Irish-American mother and a black Venezuelan-American father. Her parents divorced when she was just three years old.

Coming from a racially mixed background, I always felt like I didn't really fit in anywhere.

Mariah's mother Patricia Hickey had been an opera singer and was now a voice coach, so she was singing on stage at the age of four. Although she started piano lessons when she was six years old, she has never learned to read sheet music.

Mariah attended Oldfield Middle School and Harborfield High School. While still a schoolgirl, she was singing gospel at church when she met lyricist and keyboard player Ben Margulies. They became friends and started putting together a blend of gospel, soul and pop.

Her early jobs were as a sweeper in a hairdressing salon, a waitress, and a backing singer for Brenda K Starr. Her astonishing five-octave vocal range was recorded onto a cassette which found its way into the hands of Columbia Records' US president, Tommy Mottola. He tracked her down to where she was working as a waitress and signed her up - and her 1990 debut single, 'Vision of Love', was a number one hit. She was just 20 years old, and a new superstar was born.

Five consecutive US number one singles won Mariah two Grammy awards for 'Best New Artist' and 'Best Female Pop Vocal Performance' at the beginning of 1991. With her distinctive voice and powerful pop ballads, Music Box sold more than 10 million copies. Mariah and Mottola got married in 1993, throwing an elaborate wedding which cost around half a million dollars.

The album Daydream which was released in 1995 also sold over 10 million copies. During that decade Mariah's seven albums all went on to become huge hits, and it seemed everything she touched turned to gold. The Mottolas separated after almost five years of marriage, with Mariah citing Mottola's total control over her being the main reason for the split.

Mariah writes her own material and also composes for other projects, most notably songs for the films Men in Black in 1997 and How the Grinch Stole Christmas in 1999. Her last album for Columbia, Rainbow, which was released in 1999, didn't do as well as previous albums.

In 2000, Mariah won a Special Award for 'World's Best-Selling Female Artist of the Millennium'. The same year she was VH1's 'Artist of the Year'; DMX Music Awards 'Ultimate Diva'; Blockbuster's 'Favourite Female R&B Artist'; and American Music Awards gave Mariah a 'Special Award in recognition of extraordinary, rare, and distinguished achievements'. She signed for Virgin/EMI with a reported £43m ($80m) four album deal in 2001. The match wasn't a good one, with Mariah commenting:

The ensuing period was just a complete and utter stress-fest. I made a total snap decision which was based on money, and I never make decisions based on money. I learned a big lesson from that.

In the movie Glitter, Mariah played an aspiring singer seeking fame: unfortunately the performance earned her the Golden Raspberry Award ('Razzie') for worst actress of 2001. The Glitter soundtrack, her only album for Virgin/EMI, sold just a million copies in the US, and was considered a flop.

Mariah was admitted to hospital after suffering an emotional and physical breakdown in 2001. Reports of a suicide attempt were denied by the singer's publicist. In January 2002, Virgin/EMI terminated her contract with a £16m ($28m) pay-off. That same month she appeared in an episode of Ally McBeal, playing a self-obsessed, pampered superstar - her only television work to date. Within four months she had signed a new contract with Island/Def Jam, a three-album deal for a reputed £13.3m ($24m). Included in the deal was her own label, MonarC Music. Later the same year, Mariah's father died of cancer.

Her next album, Charmbracelet, got lukewarm reviews and achieved only nominal sales. Well into the new millennium, with record sales plummeting and her attempts at acting being derided, it seemed like her star had stopped shining.

I think as long as you hang on to who you know you are inside and don't allow other people's negativity to get to you, you can persevere and really just never lose faith.

In a complete reversal of fortune, Mariah has fought her way back to the very top. She led the 2005 Grammy nominations with her album The Emancipation of Mimi, (on which she had collaborated with Nelly and Snoop Dogg), as it was the best-selling album of 2005 in the US. The first single from the album, 'We Belong Together', spent 14 weeks at number one.

The song 'Hero' had the US Christmas number one spot in 1993 and she donated all the royalties to the families of the victims of a Long Island shooting.

She supports the fight against AIDS. A portion of the proceeds from the sale of her album MTV Unplugged went to AmFAR (American Foundation for AIDS Research). The other charities to benefit were the TJ Martell Foundation; the Hale House Centre in New York; and the United Negro College Fund.

Performing live on MTV 'Unplugged' was a unique experience for me. I felt extremely close to the audience because it was such an intimate setting. We broke the arrangements down to their simplest forms by using only acoustic instruments on all of the songs.

In 1999 she won the Horizon Award at the Congressional Foundation Awards for her work with children's charities.

In September 2001, she appeared at the benefit concert 'A Tribute To Heroes' and sang the song 'Hero', dedicating it to the families and friends of victims of the World Trade Center atrocity.

In 2005 she performed for Live 8 and at the Hurricane Katrina relief telethon.

Mariah could be a bit of a diva but she never was with me. It was great fun getting an insight into her life although I wouldn't want to live it.
- Fashion stylist Stuart Weir.

Badly Drawn Boy was asked in an interview for the initials of the most difficult person he'd ever worked with. His answer was 'M.A.R.I.A.H. C.A.R.E.Y.'

In 2002 Barbra Streisand described Mariah as 'groomed, airbrushed and overblown to perfection'.

Up to 2006 she had amassed 17 US number one hits - equalling Elvis Presley's record. The video she made for 'All I Want For Christmas Is You'1 is one of the most popular Christmas videos ever made, due to Mariah being dressed in a short Santa outfit and playing around in the snow in what appeares to be a home movie. During the week of 22 December 2005, it reached the number one spot in the Digital Songs and Tracks.

She consistently scores highly in 'sexiest' polls and 'world's most beautiful people' charts, but she's not just a pretty face - she's a clever philanthropist; launching a jewellery and accessories line for teenagers called 'Glamorized' at the start of 2006. She launched a 'Mariah Carey' fragrance called 'M' in 2007.

Her gazelle-like legs earned her an advertising contract with Gillette, to front their 'Legs of a Goddess' campaign in May 2006. As a result of this negotiation, she insured her legs for a record-breaking billion dollars. Other endorsements this month include Pepsi and Motorola, with Mariah producing a series of exclusive mobile phone ringtones. 'All I Want For Christmas Is You' was the highest-grossing festive ringtone of 2008 in the US.

Finally, a few words from the singer:

Music is what I love, it's what I feel and to know that I can do something that I enjoy and hopefully bring some enjoyment to other people through what I do is an incredible feeling, and I am just really thankful for it.

1This single made the number one spot in Japan.