The Nazca Lines - South American Wonders of the World Content from the guide to life, the universe and everything 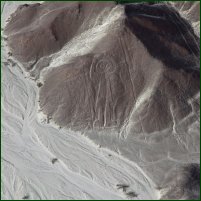 The Nazca Lines form one of the most intriguing ancient constructions. Huge drawings etched into the earth's surface in southern Peru, they can only really be seen properly from the air. Around 300 of the 'geoglyphs' (as they should more accurately be named) have been identified. In addition, there are many different 'biomorphs', or animal motifs, that litter the desert. Depictions of native South American animals including monkeys, tarantulas, condors, iguanas and hummingbirds can be seen, along with various geometric patterns such as spiralling circles, perfect parallel lines and other trapezoids - some spanning as much as 14km (9 miles). It is an incredible array of art and design and the mystery surrounding their creation still remains.

The geoglyphs are to be found on a high desert plateau that stretches between the towns of Nazca and Palpa, in an area known locally as the Pampas de Jumana. The lines were first witnessed by modern civilisation when they were spotted by pilots and passengers of commercial airliners during regular flights across the Peruvian desert in the 1920s. In 1927, local doctor and anthropologist Toribio Mejia Xespe took it upon himself to gain a further understanding of the lines, as he felt that they were 'great Incan ceremonial artifacts'. Research showed that the designs were apparently created by the native Nazca peoples between 200 BC and 600 AD.

The Nazca1 culture was at its height in the region between 300 BC and 800 AD. The people lived mainly along the coastal area of southern Peru and became strong in both agriculture and fishery as well as pottery and textiles. The same designs found on Nazcan pottery and in their woven textiles can be seen to a great extent in the Nazca Lines. It is likely that the desert was revered by the Nazcans because it could give and take life so easily. For this reason, effigies of the many creatures and plants that the Nazcans relied upon for survival were also placed in high regard - perhaps even worshipped as gods - including many types of birds, whales, sharks, fish, snakes, seeds, flowers and cacti. The society was so successful that a great city called Cahuachi was built, overlooking the designs on the plateau.

How were the Lines Made?

The Nazca Lines were made by removing the layer of iron-oxide coated pebbles that covered the desert surface. When this gravel was removed the pebbles drew a stark contrast with the light-coloured soil underneath. The furrows made in the earth were drawn with great accuracy and it is likely that the Nazca people had both a thorough understanding of geometry and basic engineering, much like the ancient Egyptians. The drawings remain on the plateau after so many years due to the lack of wind, dry desert air and limited human interaction.

What are they there for?

Since their modern discovery, there have been a variety of theories put forward to explain why the Nazca Lines exist. From primitive decoration, through to runways for alien spacecraft, some of the more common ideas follow:

Keeping in the Lines

The Nazca desert is one of the driest regions on Earth. With limited rainfall it has a steady temperature of around 25°C (77°F) all year. This natural dryness has assisted in the preservation of the lines. Backed by the work of archaeologist Maria Reiche, the Nazca Lines became a World Heritage Site in 1995, thus lessening the chances of accidental or wanton destruction of the geoglyphs.

On visiting Peru, any opportunity to see the Nazca Lines should be taken! There are many package tours available, either through the Peruvian Tourist Board or with local guides. You can reach the city of Nazca by taking an eight-hour bus ride from the Peruvian capital, Lima, along the coast. Once there, flights (which sometimes prove expensive) can be arranged over the Nazca desert. It is also possible to take a visit to the nearby watchtower Mirador4 and see some of the drawings, albeit from a distance. Only those with eagle eyes or high-powered binoculars should try this method of viewing. For the best and most affordable view of the Lines, though, day flights over the desert are available from Lima. Via these, the true beauty and majesty of the work of the ancient Nazca can be fully appreciated.

It is important to note, though, that entrance to the Nazca Lines themselves is strictly prohibited.

1Sometimes spelled Nasca, and not to be confused with Nascar racing.2Author of Chariots of the Gods.3The theory that the land has a music and a traveller can follow the songs of the land to various destinations, such as water or food.4Constructed by Maria Reiche.