The Bus That Uncovered a Chalk Mine Content from the guide to life, the universe and everything 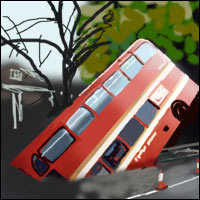 The bus was being driven by Jim Pightling, a local man who lived in Sprowston, a suburb of Norwich. He hadn't seen the hole as he attempted to pull away from Paragon Place in the vehicle owned and operated by Eastern Counties Buses Ltd. Despite it being a double-decker, glazed front and rear and along both sides on each deck, none of his passengers had seen the hole either. Yet it was a big hole - 26 feet deep, and it made a determined effort to swallow the big red bus.

As Pightling attempted to pull away, a large section of the road surface collapsed beneath the rear wheels of the vehicle. Unbeknown to everyone on board, a centuries-old chalk mine had just given way and was beginning the process of consuming the hefty chunk of public transport. The passengers managed to scramble off just a few minutes before the vehicle slipped further into the cavernous pit.

It is believed that the chalk mines date back to the 11th Century. Chalk was extensively mined underneath the city and extracted in order to burn into lime for mortar. Flint was also mined and used as stone for building. Many examples of flint and lime mortar construction can be seen in Norwich including the famous city walls, completed in 1343.

The mining tunnels, which can be found between 12 and 90 feet under the surface, are known to exist all around medieval Norwich and its outskirts. The ancient workings vary in size from six to 16 feet in height and six to 12 feet in width. They are arranged in a grid-like fashion. The underground structures are all classed as extremely dangerous and most have been blocked up. City engineers undertake regular inspections to determine their condition in an attempt to prevent further collapses.

The most investigated system of tunnels lies beneath Earlham Road. In 1823 it was rediscovered; colourful lighting was put in place and it soon became a popular tourist attraction. The 1600-feet-square grid is a maze of tunnels and some of the passageways were given attractive names. Beehive Lane, Bacchus Street and Royal Arch are examples. One of the tunnel walls carries the inscription 'John Bond 1571', presumably carved by a mineworker. Because of instability and access difficulties, the tunnels have been closed to the public for many years. Information regarding the location of the tunnel entrances remains a closely-guarded secret in order to keep the public well away from them.

At the end of Earlham Road lies St John's Roman Catholic Cathedral. Construction of the cathedral began in 1882, but it was later discovered that one of the huge stone nave pillars was sitting over a redundant mine shaft. Foundations had to be reinforced through and below the workings.

The drama did not end there. Not only did a method of removing the bus have to be devised but many homes and businesses, including a hotel and a language school, were evacuated. A gas main had ruptured below the vehicle and was leaking large volumes of gas into the surrounding area. Gas workers struggled throughout the night to seal the leak and prevent a major explosion.

Pictures of the dramatic scene were syndicated around the world. Newspapers and television channels reported the story in America, Australia and Canada; Earlham Road gained notoriety overnight.

In 1976, Cadbury Ltd had introduced a chocolate bar to the UK named the Double-Decker. As with all Cadbury products, continual advertising and awareness campaigns promoted the chocolate bar. Marketing chiefs seized the fortuitous opportunity and whole-page advertisements appeared in national press and on billboards throughout the country the following day.

The advertisements featured the dramatic picture of the bus accompanied by a small logo of the confectionery and the slogan 'Nothing fills a hole like a Double-Decker.'

You'll want to see it too

This picture of the bus has not been digitally manipulated. As unbelievable as it may seem, it is a true recording of the event in 1988.