'The Art of War' by Sun Tzu Content from the guide to life, the universe and everything 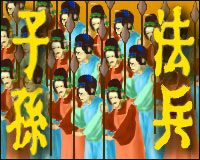 The art of war is of vital importance to the state. It is a matter of life and death, a road either to safety or to ruin. Hence under no circumstances can it be neglected.

Who was Sun Tzu?

During his lifetime, China was being torn apart by a series of wars as lesser states fought for dominance, none of which recognised the central authority of the Zhou Imperial dynasty. This was a similar state of affairs to the Sengoku period in Japan.

According to legend, Sun Tzu was employed by Ho-lú, the King of Wu during 514-496 BC. Ho-lú ruled part of the lower Yangtze Valley and was locked in constant warfare with the rival kingdom of Ch'u. Other than that, very little is known about Sun Tzu's life. Biographies from as little as 300 years after he was alive don't include much more definite information, other than repeating the tale of how Sun Tzu convinced his king that he knew how to train soldiers.

According to this legend, Sun-Tzu was already an accomplished military scholar when he was interviewed by King Ho-lú. Asked to give a demonstration of his theories, Sun-Tzu created two company formations out of 300 of the king's concubines, appointing two of the king's favourites as company commanders. He equipped them with weapons and armour, explained and demonstrated a set of drill movements, and ordered them to perform the drill. The concubines laughed at the order. Patiently, Sun-Tzu repeated his explanation and demonstration, and again gave the order. Again, the concubines laughed.

He then summoned the king's executioner and, despite the king's protests, had the two concubine commanders beheaded. New commanders were appointed from the ranks, and this time when Sun-Tzu gave the order, the concubines performed the required drill movements perfectly. (When asked why he did not heed the king's request to spare his favourites, Sun-Tzu replied, 'Once a general is directing his troops, he should reject further interference from his sovereign.') While shocked by the loss of his favourites, the king was nonetheless impressed by Sun-Tzu's character and understanding of warfare, and appointed him as a general.

The History of The Art of War

Sun-Tzu's treatise on warfare, known popularly in English as The Art of War, was supposedly written in the last half of the 5th Century BC, though modern Chinese scholars still debate the exact decade. It is nonetheless one of the oldest textbooks on military warfare known to man, and also one of the best preserved. It was one of the Seven Military Classics assembled for study by military and senior imperial officials during the Sung period (A.D. 1078). Copies of the book were disseminated throughout Japan and Korea; certainly it was compulsory study for the higher ranks of the Samurai class.

The text was first translated into French in 1782 by a Jesuit named Amiot (it has been claimed that Napoleon studied the book and incorporated its principles in his campaigns). An English edition did not appear until 1905, and since then numerous editions (in various languages and including comic books) have been published. One of the best known editions is the 1910 translation by Lionel Giles; in 1983 his text was dusted off and re-edited by popular author James Clavell (Shogun, Noble House, Gai-Jin, King Rat).

Part of the reason for Sun-Tzu's popularity in the West is the growing appreciation of the Asian region as an economic power; businessmen read Sun-Tzu in order to gain insight into Chinese and Japanese management and business strategies. Another reason is its accessibility: The Art of War is much shorter and has a less specialised vocabulary than that other classic on warfare, Clausewitz's On War.

The Art of War is divided into 13 chapters of varying length. Chapter headings and quotations listed here are based on the Giles/Clavell edition.