Franklin W Dixon - Author Content from the guide to life, the universe and everything 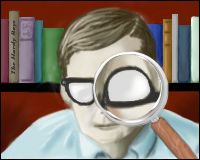 Since they first appeared in 1927, amateur sleuths Joe and Frank Hardy - aka The Hardy Boys - have been perpetually stuck in their late teens, following in their detective father's footsteps in solving the mysteries the police just couldn't crack. There are still new stories being produced years after their first appearance and it is this that leads us to one of the greatest mysteries the Hardy Boys have ever brought us - how the author of their tales, Franklin W Dixon, can still be in gainful employment after nearly 80 years in the business.

The Mystery of the Stratemeyer Syndicate

Edward L Stratemeyer (1862 - 1930) was the figure behind a range of mystery books written specifically for young readers. Stratemeyer came up with a number of storylines along similar themes for his own publishing company and developed them with a view to them playing a major part in the strategies of his 'Stratemeyer Syndicate'. However, although an adept 'ideas man', he didn't have the time/skills to write all of the books himself. Writers were hired to convert his storylines into novels, bound by contract never to reveal their part in the range. Instead, in the spirit of Thomas Edison, the character of Franklin W Dixon was created to be an all-encompassing pen-name and sole credited author on all the books of the Hardy Boys books.

The different series within the Stratemeyer Syndicate included the Hardy's female equivalent, The Nancy Drew Mysteries, the Mel Martin Baseball series, The Bobbsey Twins, Tolliver, The Happy Hollisters and the Bret King series. But it was the Hardy Boys series that remained the most popular.

The Hardy Boys were unlikely hero teenage sons of a famous detective who went out and solved cases on their own. Most of these cases either came in when their father was away or were stumbled upon by the boys themselves. Why Mr Hardy senior needed to spend so much time away when there was an 80-year crimewave going on in his home town is never really explained, but then readers never really minded; it was more exciting for them to realise that boys only slightly older than themselves could solve the crimes anyway.

By the time of his death in 1930, Stratemeyer had personally supplied the plot outlines for the first nine Hardy Boys books. His daughters, Edna Squier and Harriet Adams, took over the syndicate and continued to produce outlines.

Edna contributed storylines to the Nancy Drew series, while Harriet focused her attentions on the Hardy Boys. In 1959, the Hardy Boys series was modified, edited and in some cases trimmed down by Harriet Adams with the help of Priscilla Baker-Carr, who took on the task of overseeing the series in Adams' later years. The first 58 titles of the series were produced by the syndicate until 1979 when the rights were sold on to Simon and Schuster. This first stint is considered by some aficionados to form the true Hardy Boy 'canon'1.

So Who 'Were' Franklin W Dixon?

The true authors of the 85 titles up to 1985 have been identified by Hardy Boys fan James A Keeline. The complete works of 'Franklin W Dixon' up to this point are listed below under the true identity, where known, of the author.

Possibly the best-known to fans of all the anonymous authors, McFarlane is attributed with authorship for the bulk of the original Hardy Boys stories. He is also the writer behind Volumes 15 and 16 of the Hardy Boys (The Sinister Signpost, A Figure in Hiding),and Volumes 22 through 24 (The Flickering Torch Mystery, The Melted Coins, The Shortwave Mystery).

Altogether he wrote 33 manuscripts for the syndicate, as well as the Hardy Boys he wrote as Roy Rockwood for the Dave Fearless series and as Carolyn Keane for the Dana Girls series. He wrote a number of other pulp fiction novels, plays and articles under his own name but never was as widely-read as the Dixon pen name. His 1976 autobiography Ghost of the Hardy Boys was the first public acknowledgement of the secret identity of Franklin W Dixon.

There is little evidence to shed light on John Button except for his name being attributed to five books in the Hardy Boy Series by Keeline.

The elder of Stratemeyer's daughters, Harriet took over full control of the syndicate when her sister Edna left the company in 1942 to marry C Wesley Squier. She tried her hand at writing a few of the titles in the Hardy Boy cannon.

In 1959 she drew criticism from traditionalists by revising the existing Hardy Boys and Nancy Drew titles to revitalise and up-date them. She also claimed to be the sole author of the Nancy Drew series, but 'Carolyn Keane' was also another syndicate of ghost-writers including Mildred Wirt. However, Harriet continued to initiate the ideas and plotlines, and it was her approved edit that was published each time. Harriet also maintained control over the storylines for the first two TV adaptations of the stories.

Harriet also wrote the original manuscript for book 27 - The Secret of Skull Mountain - but it was rewritten by George Waller Junior2. She also almost completely rewrote book 30, The Wailing Siren Mystery, being unhappy with Andrew Svenson's manuscript.

Svenson started as a journalist on the Newark Evening News before joining the Stratemeyer Syndicate as a writer. Initially he worked part-time, contributing to the Mel Martin Baseball series, but in 1948, he became a full-time employee providing plotlines as well as manuscripts for the Hardy Boys and the Bobbsey Twins series amongst others.

Dougherty, along with fellow Hardy Boy authors John Almquist, James Lawrence and Vincent Burancelli, wrote all but five of the 33-book Tom Swift Junior Series under the pseudonym Victor Apppleton II. The series was produced by Grosset and Dunlap between 1954 and 1971 and was another Stratemeyer spin off. Edward Stratemeyer had first used the name Tom Swift in his 1894 book Shorthand Tom, the Reporter before the Tom Swift Senior series (also published by Grosset and Dunlap) started in 1910.

Charles Strong only wrote one book in the series. However he contributed ten stories to Thrilling Adventures Magazine between 1938 and 1943 including one called 'Wrong Way Amundsen'. He also wrote a series of children's books about dogs between 1948 and 1961 including one continuing the polar explorer theme, We Were With Byrd at the South Pole.

While little is officially recognised about John Almquist, one widely circulated rumour is that the John Almquist who was an English teacher of Montclair High School, New Jersey, USA in the 1950s and 60s is the missing link. There was rumours amongst the pupils that he had written some of the the Hardy Boy books. The way he taught English to pupils merely strengthed this possibility that the two John Almquists are the same.

As well as his Hardy Boy books, Lawrence wrote the majority of the Tom Swift Junior series, contributing 24 of the 33 titles.

A James Buechler is listed as a contributing writer for The Saturday Evening Post in 1964 and 1965, with two stories to his credit. His date of birth is listed as 1942 which would mean he was 18 or 19 at the time of his contributions to the series. Although not impossible, it may be that there is another person who wrote under this name or maybe that he was an exceptionally gifted young author who was so able to absorb the series that he could write to the formula.

Vincent was the son of Prosper Buranelli (an author in his own right having written a detective story in 1922 for Detective Story Magazine) who was a journalist, writer and an aide to Lowell Thomas, the newscaster and writer of 52 books. Surrounded by such a literary upbringing, it is no surprise that Vincent also ended up writing.

As well as contributing to both the Hardy Boys and Tom Swift series, he edited a number of classic children's books for the 20th Century young reader. His bibliography also includes biographies and other non-fiction books such as his books on Josiah Royce (1964), Edgar Allan Poe (1978) and Thomas Alva Eddison (1989).

The grandson of Harriet Adams and therefore the third generation of the family to be involved in the Hardy Boys.

Swinburne wrote a couple of science fiction stories that were listed in the 1977 Reader's Digest 'Science Fiction Top Picks' - 'Out at First Space' and, co-written with his wife Irene, 'They Got There First'. He has also written several works of non-fiction for children including a history of American Football (from the first college game in 1869 onwards) called America's First Game, published in 1978.

The Hardy Boys on TV

There have been a number of incarnations of the Hardy Boyst being adapted for American television. The first occurred in the 1950s when two serials, The Mystery of the Applegate Treasure and The Mystery of Ghost Farm, aired on Disney's Mikey Mouse Club on ABC.

An animated series in which the boys (riding on the back of the success of The Monkees) formed a rock band as a cover to carry out their investigations. There were 34 episodes which ran from 1969 to 1971 on ABC but these were loosely based on some of the books, even bearing the same titles.

In 1977, ABC yet again brought The Hardy Boys to the screen, this time alongside another Stratemeyer favourite, Nancy Drew. Harriet Stratemeyer Adams retained script approval for the series. Initially, The Hardy Boys and Nancy Drew had episodes that alternated between the two ranges, though in an episode first shown in February 1978 the three joined up for a few story lines. However Nancy Drew was dropped in the Autumn of 1978 and the show ended its run altogether in January 1979 after just 38 episodes.

1995 saw another TV show of The Hardy Boys and the only time they appear on screen as older than their 17 and 18 years. In the series, made by New Line Television, Frank worked for a newspaper and Joe was a college student. Yet again there was a Nancy Drew Series produced in tandem and the two strands filled a one-hour slot. The series was cancelled after just 13 episodes (in American TV terms, just over half a season.

1A term, often misused, to describe an accepted, official grouping, to differentiate from later additions that are somehow felt to be less 'pure' in their 'officialness'.2Possibly George MacGregor Waller born 1919 who is listed in 'Contemporary Authors' below.3Largely rewritten by Harriet Adams.4Originally written by William Halstead before this rewrite.