'Life On Mars' - TV Series Content from the guide to life, the universe and everything 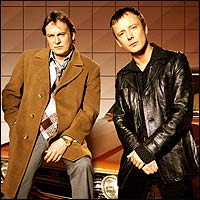 Take a look at the lawman,
Beating up the wrong guy.
Oh man! Wonder if he'll ever know,
He's in the best selling show.
- 'Life On Mars', Hunky Dory, David Bowie, 1971

Sam Tyler is a cop. More importantly he is one of the new breed of modern detective: ambitious, intelligent, yet also in touch with his emotions. As a no-nonsense Detective Chief Inspector he is determined to keep the streets of 21st Century Manchester safe, but after a car accident, he wakes up bewildered. Picking himself out of the dirt to climb back into his car, he is shaken; his surroundings have altered in a way he can't understand. His car has changed, his clothes have changed. He doesn't know it yet, but the cuban heels and flares he now wears can only point to one thing. He's in the 1970s. Has he travelled in time? Is he in a coma and dreaming? Or is he crazy? Or worse... dead, and heaven is Manchester, 1973?

The sound came over on the police car radio...

Life on Mars is a police drama with a difference. Sam Tyler, the lead character, has to settle into 1970s life having suffered a car accident, a demotion from Detective Chief Inspector to Detective Inspector and being on an apparently requested transfer from Hyde. Along with trying to understand what has happened to him, Sam also has to deal with his new 'guv'1, DCI Gene Hunt, and the other members of the 1973 version of the Manchester and Salford Police CID Unit. And on top of all this, he has to cope with other bizarre occurrences.

Sam is certain he can sense events from his life in 2006 seeping into his new life in 1973. His mother's voice talks to him from a radio or from a telephone that only he can hear ringing, he pricks his ears up to the electronic beeping of what he thinks are life support machines, and he often has to deal with Open University TV lecturers speaking to him at night from his TV screen and the terrifying manifestation of the young girl featured in the BBC Test Card 'F'. Sam is never quite sure of what the next day will bring, whether he will return home and everything will be just as it was, or he'll awaken in a hospital bed, or worst of all... he might stay in the world of 1973 forever.

Once upon a time I drank a little wine...

Life On Mars is the brainchild of Matthew Graham2 and Ashley Pharoah. Produced by Kudos Film and Television3 the series was first aired on the BBC in 2006. The differences between life in 2006 and life in the 1970s are what makes Life On Mars so much fun to watch in some instances, however one of the more innovative and original devices the creators have used in the series is that of only showing developments through each episode from the perspective of one character - Sam Tyler. He is experiencing his life, whether it be dream or reality, in the first person and the viewer is following it with him in the third, thus nothing is seen by the viewer that isn't experienced by Sam. The action either centres on, or involves him as he is rarely 'out-of-shot', which aids in impacting the sense of 'culture-shock' that Sam - and the viewer - experiences in comparing his modern life to that of the seventies, and how he adapts to that new life.

All these elements make for compelling viewing, especially for those brought up in the heady days of trade union action, 'glam' rock and flares. It is easy to travel back to 1973 with incidental music from performers such as David Bowie, Deep Purple, Cream, The Who, Wings, Thin Lizzy, Pink Floyd, The Sweet, Uriah Heep, the Rolling Stones, Slade, Wizzard, Status Quo, T Rex, Roxy Music, Lindisfarne, Hawkwind, Jethro Tull and the unforgettable Atomic Rooster setting the scene. But there are also simple touches that further bring the decade to life, like colours of curtains, pictures of pin-up girls and footballers in locker rooms, big Curly Wurlys (chocolate bars) and 'Party Sevens'4, through to the often shocking treatment of minorities, policing methods (including archaic forensic techniques, the advent of women officers, filing without computers), and the iconic lines of the cars of the time, particularly the Ford Cortina. The series draws in themes from classic police dramas such as The Sweeney, The Professionals and Z Cars, but also the humour of Starsky & Hutch, The Saint and the later Doctor Who. The strange combination seems to work well, the characters lively and entertaining, even when delivering cheesy lines.

D'you wanna be in my gang?

The members of Sam Tyler's CID unit are a mixed bunch. Or rather, a mixed up bunch. Each of the major players in the series and the actor playing the part follows;

It's got to stop, my mind can't keep inventing all of this.

Sam Tyler is the protagonist of the series, it is he that everything revolves around. In his early thirties, he's a little pedantic and seems not to have a funny bone at all. When his world collapses Sam appears to cope reasonably well, his policing skills working to try and figure out what has happened. His modern techniques and apparent 'madness' do little to help his cause, especially as he is all the while trying to return to 2006. Or is he? Sam seems to be settling into seventies life very easily...

Old-style police officer DCI Gene Hunt is Sam Tyler's boss in 1973. A cross between Brian Clough and Dirty Harry, he follows his gut instinct and isn't afraid to do a little roughing up to get answers. Underneath the gruff exterior though, he cares about his job and the people he works for - the public. When Sam arrives, at first Gene takes an immediate dislike to him, but as time goes on there seems to be a hint of respect, and perhaps even pride.

Annie is a young policewoman, underused and wrapped up in the sexual politics within the CID unit. That is until Sam Tyler brings her into the fold, realising her potential as a good copper. A degree in psychology and a quick thinker, Annie wants to help Sam, even though he appears mentally unwell. There's a tension between Sam and Annie that could lead somewhere, but Sam's professionalism and Annie's confusion at what he is really about prevents any true romance.

Chris is the dogsbody of the team, a young man who should have something to prove, but doesn't know how to do it. A little slow on the uptake, Chris is clumsy and ineffective in his role. While still liking a pint and a laugh with the lads, Chris finds the methods and ideas that Sam has bought with him from the future fascinating. Under Sam's tuition he undergoes a transformation, from being the Costello to Ray Carling's Abbott to that of a 'thinking copper'.

You and me, bare-knuckles. I'd have you.

Ray is Gene's right-hand man before the arrival of Sam Tyler to the unit. He is an old-fashioned type of 'bloke'; likes his beer, his football, his fags and his pin-ups. He's a fighter, not a thinker, and has trouble with the new style of policing that Sam Tyler is forcing him to try, leading to friction and rivalry between the two. But when it starts getting results, perhaps the bull in Ray can change.

The cops are out, they're running about...

The first series of Life On Mars ran for a total of eight hour-long episodes at the beginning of 2006.

Welcome, you're home once more...

Life on Mars is set in Manchester, so it is only appropriate that the city is used as backdrop to the events during the series. Some of the places to be seen include:

While Life On Mars is a wonderful representation of life in the 1970s, the observant viewer of the series can pick up on a few minor 'gaffs'6:

Each of the headers in this Entry is a reference to a 1973 UK Chart Single. Can you name them all?

1Slang term for governor, or boss.2Who has also written scripts for Spooks and Doctor Who.3Makers of Spooks and Hustle.4A large can of beer containing seven pints.5A style of blackmail involving a pretty girl, a bed and some photographs. Get the picture?6Slang term for errors.