The Sweeney - the TV Series Content from the guide to life, the universe and everything 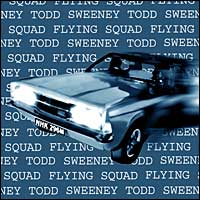 It's the 1970s, the suits are beige, the flares are big and the criminals are ruthless. Luckily for the public, the police sent to catch them were even more ruthless. The Sweeney was about two detectives from Scotland Yard's Flying Squad, a fast response team to deal with armed robberies. Cockney Rhyming Slang for Flying Squad is 'Sweeney' named after Sweeney Todd the Demon Barber. It started, like all good TV Cop shows, with memorable music1 courtesy of Harry South, and a frantic title sequence a montage of shots of a car rushing round the streets of West London.

We're the Sweeney son, and we haven't had any dinner!

In the early 1970s, Euston Films (the newly set up film subsidiary of Thames Television, ITV's London franchise), decided to develop a new police drama that would shatter the cosiness of more sedate shows such as Dixon of Dock Green and Z Cars, and focused on the shake up that was happening in the police force, where new technologies such as computers were becoming a major part of crime fighting. The concept was to focus on an old fashioned 'copper' who was struggling to adapt to the new way of catching criminals and was considered a dinosaur by his superiors, but respected by those he worked with. It would also replace Special Branch another TV series that was loved by viewers but hated by the people who made it. The Sweeney was created by Ian Kennedy-Martin who, ironically, was the brother of Troy Kennedy Martin, creator of Z Cars.

The plan was that the series would begin with a feature-length episode as part of a six-part series of unconnected TV movies under the banner of Armchair Cinema (the popular drama anthology Armchair Theatre having been a regular part of ITV schedules since 1956). Ian Kennedy Martin's Regan introduced the characters and the general premise that would then continue in the series, to be broadcast the following year. Sadly, personal disputes behind the scenes led Kennedy Martin to depart the project2, although his brother Troy would become one of the main writers for the series.

Regan aired on 4 June, 1974, and performed well in the ratings. The first series of The Sweeney', consisting of 13 episodes, came to TV screens on 2 January, 1975. It went on to last for 53 episodes over four series. It was eventually broadcast in over 50 countries.

The writers of the scripts were pressured into producing scripts as quickly as possible, and redrafting was frowned upon, so the dialogue was as raw and gritty as the show (as some of the quotes in this Entry show). Episodes also broke the traditional rules about happy endings; the cops didn't always get the villains and even when they did it was not without facing tough challenges, such as discovering that the culprits were old school friends or that their dedication to the job has lost them another girlfriend.

Get yer trousers on - you're nicked!
The immortal Sweeney catch-phrase that the writers tried to shoehorn into as many episodes as possible.

John Albert Jack Regan, played by John Thaw, was, like the actor who played him, originally from Manchester, but had lived in London long enough to pick up a large vocabulary of Cockney rhyming slang. He is the stereotypical copper who believes in gut instinct and hunches over modern technology. He was divorced from Kate, an air hostess and had a young daughter who gets kidnapped during the series. During the series he had a long string of lady friends. He specialised in bending rules, drinking heavily, and being threatening to criminals and informants alike.

Carter, played by Dennis Waterman, is Regan's sidekick in the squad and being ten years younger (26 in the first series), he gets more of the running and beating people up. It wasn't unknown for Carter or Regan to start a fight with the criminals after they had been captured just to prove how tough they were. In the first series he got married to a woman who didn't think that Regan's heavy drinking, demanding, chain smoking, work-a-holic Regan was a good influence on the slightly less-heavy drinking, chain smoking, willing, work-a-holic Carter. In the second series, his wife got run over by a Morris Marina in a hit and run. Regan's reaction to this was to encourage Carter to throw himself into his work and live the life of a bachelor. It might seem callous, but it also meant the two characters were free to concentrate on the stories rather than being distracted by more mundane, domestic issues.

Haskins, played by Garfield Morgan, had the unenviable job of making sure that Regan and Carter were kept in just enough check but bent just enough rules to catch the bad guys. He generally comes over as the fun killing pencil pusher. This is possibly because he doesn't have a long string of lady friends, instead he has a wife nags who him on the phone during the day3.

The cars were as much a part of the show as the people. The Flying Squad had their own drivers, so that Regan and Carter could burst out of the door to find a car with engine running, waiting to pick them up. Regan's car was a beige Ford Granada 3 litre (it was a Ford Consul GT in the earlier episodes), while on the occasions they were split up, Carter normally ended up in a blue Ford Cortina 2 litre.

When it came down to a car chase, as it often did, the criminals normally used a Mk II Jaguar to escape. These were a bit flashy, and were very quick, however in the end they always got beaten by the Granada and ended up in a hole or on a pile of rubbish on a waste ground. It comes as a puzzle then why John Thaw's character in Inspector Morse ended up roaming around Oxford in one.

The show's gritty, often brutal, depiction of London's criminals and police made this one of the most successful police series that British television has produced. When the show started, Dixon was still wandering around Dock Green, but the in-your-face methods of Regan and Carter made it difficult for police shows to go back to that kind of quaint storytelling. In the world of The Sweeney, the good guys can go beyond the law to catch the criminals. Though senior policemen complained about how the force was depicted in the series, the show was a firm favourite among the lower ranks. It's also been alleged that more than one detective found his real-life persona influenced by Regan's uncompromising methods.

Though the series finally came to an end on 28 December, 1978, it spawned two feature films, and a number of spoofs from car adverts4, pop videos5 to The Comic Strip Presents Detectives On The Edge Of A Nervous Breakdown where Jim Broadbent played a Regan-type character. Thaw and Waterman starred on the 1976 Morecambe and Wise Christmas Show, in return the legendary comic duo had cameos in the show. Its agressive approach to good, old-fashioned policing left a permanent mark on British TV.

1A soundtrack album was released in 2001 on the Cinephile label, tapping into the wave of nostalgia for 1970s cop shows. At the time of writing, the CD has been deleted.2He went on to write for other police dramas such as Juliet Bravo and The Knock.3It would not be a male-focused 1970s drama without the nagging wife!4Nissan Almera.5Carter USM's 'Glam Rock Cops'.