For some reason my alarm clock went off at 6.30 am which was definitely not part of the plan. Needless to say I made it to breakfast before close off time without too many problems. Thankfully today's itinerary was a lot more enjoyable than yesterdays. The morning was to be taken up by a tour of Phnom Penh and in the afternoon we were finally going to play our first game of rugby.

The main ports of call on the morning tour were the Royal Palace and the Silver Pagoda. For some reason you are not allowed to take photos within this complex, although there was an official photographer who took a group photo for us. I can't remember if anyone else purchased it but I certainly didn't, so I suspect the price was less than reasonable.

The Royal Palace complex reminded me of a smaller version of the Royal Palace in Bangkok, with a lot less tourists. This is not to say that it was small, as there was easily room for a football field or two to be installed between the various pavilions should I have suddenly been given the keys.

The silver pagoda (also known as Wat Preah Koh) is so called because it has over 5000 silver tiles on the floor which weigh around 1 kilogram each. Around the walls are displayed a priceless collection of cultural treasures including jewellery, artefacts and statues. The Emerald Buddha (which isn't actually made of Emerald) sits on a dais at the front of the temple. In front of the dais was a life size statue of Buddha which our guide told us was made from 90 kilograms of gold, and is decorated by more than 2800 diamonds ranging in size from a massive 25 carats down to the merely huge 18 carats.

After the obligatory stop at the souvenir shop, which was actually quite welcome due to the air conditioning, it was time to head back to our hotel and then find something to eat for lunch.

On my way back from the central markets the day before I had passed by a restaurant (the Ha Llo) where they were making fresh noodles out the front. Given that it was only about 20 metres from the front entrance of our hotel Little John and I decided to give it a try. A plate of 12 dumplings and 2 big noodle soups (one duck and one beef) set us back by the grand sum of $3.

Tim met us at our hotel so he could guide the bus out to the oval, which was within the grounds of the International school, not at the Olympic stadium as some had been hoping. As we arrived at the school it started raining, heavily. There was a curtain raiser to our game between two of the local school sides which I was hoping to watch, but due to the rain we mostly stayed under shelter in the nearby volleyball court for much of the match. From what I did see, there was no doubting their commitment and passion for the game, even if they were not necessarily well versed in a lot of the technicalities. 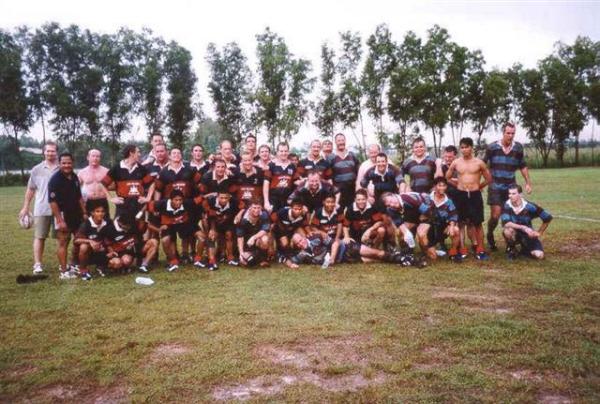 The torrential rainfall disappeared as quickly as it arrived as it is wont to do in the tropics. By the time we ran out, the field was pretty much covered in a layer of water, and due to the reappearance of the sun it was now even more humid than normal. I distinctly remember seeing a small turtle in a puddle next to the path between the volleyball court and the oval.

The game didn't start very well for us when Bob L watched the ball land between his legs and go into touch about 10 metres out from our line. Matters weren't helped by my terrible kicking and I believe Fatcat was almost thrown out of the front rowers union for his effort. Vinnie also had a shocker with the boot but we managed to reach half time with the score still 0-0.

Early in the second half we scored a well constructed try after good lead up work by Bob and myself saw Case steam through a gap, only for his aging legs to give up on him 10 metres from the line, forcing him to pass to Dirty who went over untouched.

We had much the better of the play overall but their star player (a kiwi they fly up for the Angkor tens every year) ran through our tiring defence (I'm probably being a bit generous to Bob and Blackbird here, amongst others) and scored.

Rob, the ref, had been very fair up until this point but with them camped in our territory and none of us likely to run seventy metres at this point in proceedings, the last two minutes took about ten. Thankfully we managed to keep them out and the game ended in a very enjoyable 5-5 draw, although it would have been a lot more enjoyable if there weren't the local equivalent of stinging nettles all over the park.

We showered and changed before catching the bus back to our hotel to dump all our wet muddy footy gear. Unfortunately as we were flying out the next morning there wasn't time to get it laundered so the best that could be done was to put it all on a chair on the balcony in front of the air conditioning outlet fan. At least it ended up dry.

We headed off to the Sharky Bar about an hour and a half early for the after-match function so we could hold our daily kangaroo court. I had added $50 on to the cost of everyone's trip so we could donate some money to a worthwhile cause. It was unanimously decided that there was no more appropriate use of the money than in donating it to supporting junior rugby in Cambodia.

Once again the hospitality from Les Piliers D'Angkor was outstanding, with free beer and food provided. A wonderful, drunken rugby night was had by all. I decided that drawn games are probably the perfect result for social tour matches like this one as everyone is happy afterwards.

When Sharky's closed a large number of us piled into Rob's (the ref) UN vehicle as he wanted to take us to a special bar he thought we might enjoy. We were promptly deposited at the tiny Le Cyrcee Club, which was just a little bit more than we were prepared for, so we escaped in a flotilla of motos to the relative tameness of the Martini Club. About this stage in proceedings my memory gets a bit unreliable but I do remember Martini Club shirts were more expensive than I was prepared to pay, even in that state.

I do remember another flotilla of us returning to the hotel at some point, but whether there were other stops in between I can not say.