Today started off terribly. Vinnie had managed to allow Ian, the tour mascot, to be stolen by street kids last night. The news spread like wildfire through the tour. Everyone was in shock, or everyone that was awake anyway. Kangaroo court was not going to be a pleasant experience for Vinnie.

JR, Jimmy and I went for a bit of a stroll down to the Mekong river while we waited for everyone to wake up. We even managed to cross a few major roads without being hit by a motorcyclist, which was no mean feat, let me tell you.

Thankfully the plane to Siam Reap, in Cambodia, wasn't leaving until the semi respectable hour of 11.30am which gave everybody enough time to get ready. Well, everyone except Netball, who started a tour-long trend of being late. Thankfully, the staff at the hotel managed to charge USD$1 for him to hand his key back.

The bus trip back out to the airport was a sombre affair. Kangaroo court was called to order with Judge Fatcat presiding. For those of you unfamiliar with the concept of a Kangaroo court, it is where the previous day's indiscretions are aired and penalties imposed. Indiscretions can include just about anything; going to bed too early, snoring, locking your roommate out, drinking Bacardi Breezers, killing someone, etc. Basically anything that is deemed punishable by the judge. False accusations result in a double fine for the accuser.

Most of the bus trip was taken up reading the charges against Vinnie and Joburg. The rest of us only rated minor offences. I thought the judge was harsh but fair. We had already raised almost enough money for our first team dinner.

As this was only our second airport check-in we were still a bit disorganised but I eventually managed to collect everyone's passport and ticket. The check in girl took quite a fancy to my tour hat, a wide brimmed straw number with a cloth band displaying the Petersham logo. Unfortunately I didn't have any spares, as just about every airport and hotel we checked into I was asked for one.

The flight (VN827) only took around an hour and a half, but seemed to take a lot longer. When it was possible to see through the cloud cover about the only thing visible seemed to be water. We flew straight over the airport, possibly to wake up the guy in the control tower. I'm pretty sure I caught a glimpse of Angkor Wat as we banked around for the second attempt. 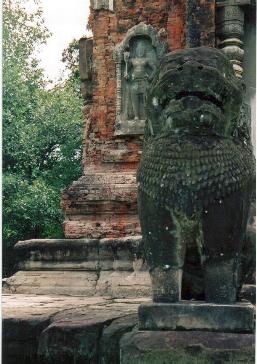 Thankfully we had no problems disembarking and were met outside the airport by our guide for the next few days, Chen Kenny, as he was soon dubbed, turned out to be a wonderful guide with a good sense of humour. He had no idea what Rugby was, and took a while getting used to the fact that the tour was men only, but he judged our mood and responded accordingly.

For the entire drive from the airport to our hotel, which was about 15 minutes, the only thing I saw was hotels being constructed. I would strongly suggest you get to Angkor Wat in the next year or two if you don't want to be sitting in a queue waiting half the day to get in.

The Ta Prohm Hotel was located just around the corner from the Old Market, with a nice little bar upstairs, although for some reason the handrails on the main staircase were not finished. Rooms were once again allocated, bags dumped and then it was time to go visit our first temples. Case asked if we could get some lunch 'somewhere the locals eat'. We all piled back into the bus and were promptly deposited at a 7-11 equivalent. I'm pretty sure that wasn't what he had in mind.

The first temples on our list were Preah Ko and Lolei, both of which are part of the Rolous group of temples built in the late 9th century. The main reason for viewing these temples is to give you an idea of how the architecture developed over the years as they are not in great condition. They are also known for the deep vivid carvings style typical of their era.

What is less well known is that as soon as you arrive your bus will be surrounded by small children selling postcards, books, silk scarves and t-shirts. Thankfully there must be a local law that does not allow them within a certain distance of the temples so you can view them in peace, before running the gauntlet on the way back to the bus.

Given the poverty rampant in Cambodia, it was hard to begrudge them $USD 1 for a packet of ten postcards or a scarf, although I found out later that some of them earn as much as USD$100 a day. Some of the postcard sets were actually quite good and the scarfs also looked nice. Netball bought a particularly ugly blue and white checked scarf which looked very much like a tea towel 'to put on the back of the lounge and keep the dust off'. 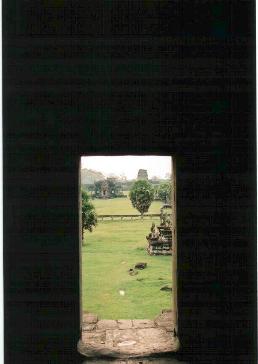 Kenny did a great job explaining the history and significance of the temples, pointing out the difference in the construction method used compared to later temples and demystifying the elaborate carvings for us ignorant westerners. Vinnie excelled himself by putting his foot on a wall at Preah Ko and causing some of the bricks to fall down. Pigeon was advised to use a banana tree, when he asked where the toilets were at Lolei, although I'm pretty sure they didn't mean the one right at the entrance to the monks living quarters.

To get to Angkor Wat we had to drive back to Siam Reap and out the other side. We saw many interesting vehicular contraptions on the drive back. One thing I will never forget was a full grown pig strapped sideways onto the back of a tiny motorcycle. Unfortunately no one managed to take their camera out in time to snap a photograph.

Just as we approached Angkor Wat it started to rain. Heavily.

We pulled up opposite the walkway over the moat. Kenny and his assistant busied themselves finding enough umbrellas for us all. We then set of in a formation vaguely akin to a Roman phalanx. By the time we reached the outer wall it had thankfully stopped raining.

Angkor Wat is huge and almost every available space is covered in carvings of apsaras (celestial nymphs) or bas reliefs telling of historical and mythical happenings. I'm sure you could spend days here and not see everything. In some ways there is almost too much to see and it all can become a bit overwhelming. 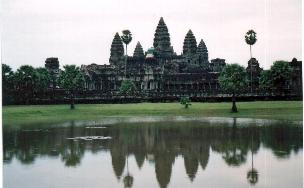 We worked our way from the outer wall, to the central temple and climbed the central tower which rises 30 odd metres above the third level and 55 metres above the ground. Given my adversity to heights I'm not sure what possessed me to grapple my way up the steep (!) steps to the very top. Thankfully there was a thin steel railing on one of the stairs, otherwise I might still be up there.

We eventually left when the light began to fade, exhilarated, exhausted and happy. Kenny, suggested a restaurant with local food and a shadow puppet show. Most people were willing to try the local cuisine (I remember the frogs legs being particularly good) although a few were a bit more hesitant. Jimmy found the money that had been 'pickpocketed' in Saigon, in one of his pockets when it came time to pay the bill.

Once the meal had finished, the bus dropped us back into town, where we headed out to sample Siam Reap nightlife. At about this time the tour code of silence descended.