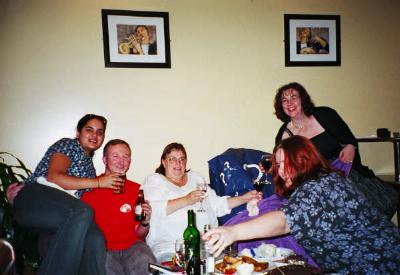 ...you travel half way around the world to go to an h2g2 meet!

I had dropped by the Australia and NZ researchers page a couple of months or so ago to check out which researchers were where, and hanging off the page was a thread about the next Sydney meet. It was taking place a couple of weeks before I was due to fly in, so I dropped by the thread and posted an 'aw, shucks, that's a shame' message. The next thing I know they've moved the date so I can attend!

So the Sydney meet becomes a fixture in my itinerary, and Big Bro is told that I will be going to meet a whole load of people I don't actually know, and nothing is going to get in the way!

I'd shown Big Bro h2g2 a couple of years ago, and he had lurked a little but never actually signed up, so he did not know just how wonderous a place it is. But he could hear the modem connecting at 3 in the morning when I signed on each night in a fit of jet-lagged insomnia, and he could see just how much time I spend here.

I was a little nervous, I had 'met' Feisor on-line a few times, but I was not really aware of Linus, Shrillian, Cheesecake or Platypus. This is partly because I have been limiting myself to Peer Review and Ask h2g2 for a while, and partly because the 11 hour time lag does make a difference. Amy the Paper Lady was going to be there, but though she takes great photographs, she isn't always the most talkative of members at a meet.

What if they were all Thingites, (apart from Amy)?

What if it turned out we had NOTHING in common at all, (apart from Amy)?

And I was forcing poor Big Bro into coming along with me, partly for moral support, and partly because I thought it would be fun for him. Educational, like.

Anyways - Feisor had phoned me and promised to meet us underneath the main steps at the Opera House. (A wonderful place for a rendezvous). Feisor had said 'You will recognise me' - and there are few truer statements in the world than that. Once you have seen a photo the reality is even more unmistakably wondrous!

We all climbed into a cab and went off to a real pub. Most of the pubs where Big Bro lives are now up-market bars, but this was an honest to goodness pub.

And what can I say?

Hootooers are amazing people. We had a wonderful evening talking about everything from - well everything really. Cheesecake, spam, red-wine smileys (thank you Platypus), the art of being an Aunt, the history of the site, (we all miss Peta), Rupert, Thingites, our favourite researchers, (that took ages and ages - how many ears were burning on Saturday?), English pubs, Australian pubs, Star Trek, Doctor Who, Salmon of Doubt, more Heinlein than you can shake a stick at - hey - everything under this and every other sun!

The lovely thing was the conversations ebbed and flowed and we all ended up speaking to everyone one at a time, (apart from Linus who had to leave early).

Pictures are now available on My Geocities Site

Remember that this one was worth crossing the planet for!