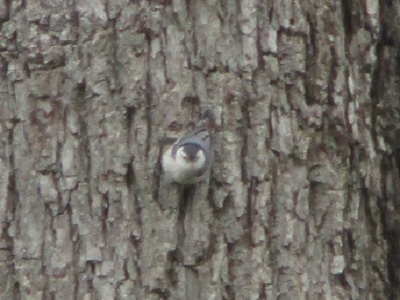 See that little blue-backed bird? He's driving you nuts by climbing up the tree trunk, turning around, marching sideways, and then going back down the tree trunk. Then, to really make you raise your eyebrows, he stops to rest on a twig –   upside down. What's he up to? He's looking for dinner. The white-breasted nuthatch (Sitta carolinensis) likes to eat insects, although he'll settle for seeds and nuts if they're on offer.

They're noisy, too: nuthatches' cheerful calls liven up the acoustics of your backyard. They aren't endangered: you can see them all over North America. Other continents have nuthatches, too, just different ones with different calls and colourations.

White-breasted nuthatches love big deciduous trees. They use their beaks to probe the ridges in the bark for yummy bugs. The birds are often to be found on the edges of forests, in old, wooded neighbourhoods, or in parks with old trees. They aren't shy around people. You may find one flitting overhead, or pausing, just for a second, to give you a coy peek before it's off on another insect hunt. Want to get them to come closer? Leave out some sunflower seeds. They may grab a few to take home – sunflower seeds are prime nuthatch snack food and they engage in 'food caching', saving food up for the baby nuthatches. They also like suet and, of course, nuts.

White-breasted nuthatches don't usually migrate. They pair up after the male does his courtship dance, and they'll stick together for the whole season to build the nest and raise the kids. Some nuthatches even mate for life. The male has strategies for chasing away unwanted suitors for his mate's attentions, such as display dancing.

Once mated, the white-breasted nuthatch couple find a suitable nest hole in a tree. Unlike other nuthatches, they prefer to shop for existing real estate rather than excavate for themselves. They may tidy up and enlarge an abandoned woodpecker nest. The female will do most of the work. Once the nest is lined, she'll lay 5-9 eggs and sit on them for about two weeks. The male will bring her food. Once the babies are hatched, both parents will feed and tend to them. The young stay in the nest for two to three weeks.

When the nest is threatened, nuthatches put their dancing skills to work again. Their display dance is sure to intimidate a would-be predator such as a squirrel or another bird. It may make us laugh, but it will impress a smaller bird or nosy mammal.

Nuthatches are scientific and use tools. They may use pieces of bark or twig to winkle recalcitrant insects out of grooves in the tree. They also put the pheromones of prey insects to good use. They'll rub an insect carcass around the opening of the nest. The smell will discourage visitors. To avoid getting the bug juice on themselves, the nuthatches will fly straight into the hole.

White-breasted nuthatches are common in North American parks, woods, and backyards with good-sized trees. Watch out for these compact and agile birds. They're sure to keep you amused and reward you for feeding them.