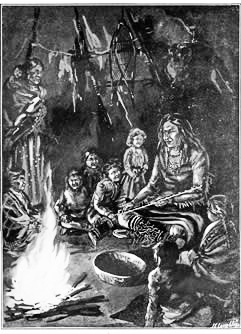 [Retelling of an Ojibwa tale. ]

Many years ago, an old man sat in his lodge. It was Winter. A frozen stream was nearby, and the man's fire was nearly out. Outside, snow was blown about by the wind.

The old man had been alone a long time. One day, a young warrior paid a call on him. He was full of the bloom of youth.

The old man welcomed him. He filled his pipe with tobacco, lit it from the embers of the dying fire, and offered it to the young man.

After they had smoked a while, the old man listed the things that he was famous for. 'When I blow my breath, the streams stand still. The water becomes like stone.'

Then it was the young warrior's turn to introduce himself: 'Whenever and wherever I breathe, the plain becomes full of flowers.'

It was the old man's turn again: 'I have but to shake my head, and snow falls. Leaves fall from the trees. Animals hide.'

'Yes, but when I shake my head, a warm rain falls on the earth,' the young warrior said.. 'Birds come back to the land, the streams flow, and blossoms spring up.'

Then the sun came up outside, and began climbing its trail through the sky. The old man fell asleep. When the sun's rays hit the stream next to the lodge, it softened into water and began to flow again. The fire in the lodge died, but this no longer mattered, for it was becoming warm outside. Robins came to sit on the lodge's poles.

The warrior turned to look at the old man, and suddenly he recognized who he was: Peboan the Winter-maker. For the young warrior was Seegwum, who brought Spring.

Peboan was he who banished hope for most of those who lived on the plains. Seegwum was he who brought hope back.