A Thing with Feathers 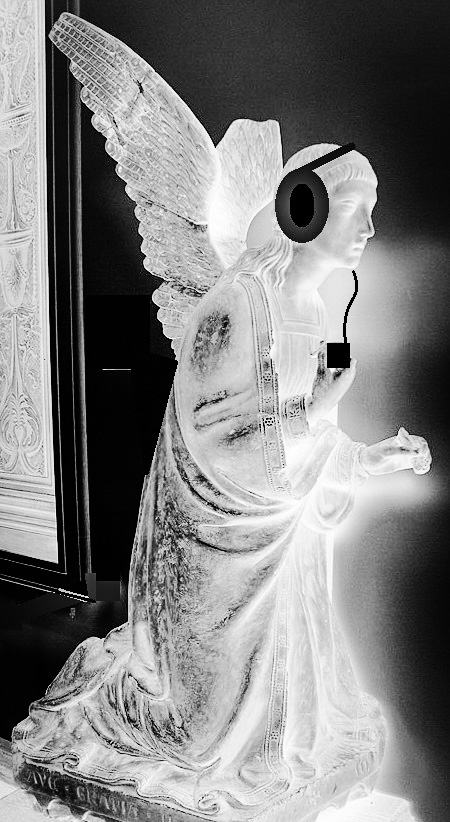 Hope is a thing with feathers that perches upon the soul

Said the homeless young man standing there, strong against the cold…

…sang young Jim Tanner, plunking away on an acoustic guitar.

'You won't be ready in time for the virtual Christmas concert,' commented his little sister Cherry.

'I will, too,' Jim insisted. 'I still have time to practise. And I've already got the Zoom loaded. You just work on your tin whistle and leave me to do my song.'

Cherry shrugged and went back to her room, whence could be heard the (slightly off-key) strains of 'Do You Really Want to Know?' Jim chuckled: he wasn't sure if Grandpa Tanner was going to appreciate having one of his own songs played back at him. After all, he'd been recorded by some pretty good bands back in the 60s. But he'd pretend to like the 'concert' anyway. Music ran in the Tanner blood, and at least they kept trying to live up to it.

When he thought he'd got Moe Bandy down, Jim played around with trying to photoshop the Pittsburgh statue of his namesake, four-times-great-grandfather James Tanner, composer. He put some earmuffs on the gentleman so he wouldn't hear Cherry's tin whistle solo.

The noise in the orchestra pit was deafening. Everybody was tuning at once. The tympanist was trying to calibrate but was shouted down by the violin section. Everybody shut up for about six seconds while the pianist gave them an A. Then it all started again. Cacophony.

The singers jostled around on the risers.

'Move over, Gabe! Your feathers are tickling my neck!'

'Move over, yourself! Don't you ever preen those wings? Seriously! You're moulting, Rafe!'

'QUIET!' They came more or less to attention and looked at the conductor.

Sandalphon sighed. Conducting angelic choir=herding cats, was his thought. 'Okay, you seraphim. Turn to number 7. And stand up straight. Wings folded, please. There's only so much room on these risers.'

Gabe groaned. 'Aw, cirrus! Not 'Hallelujah' again. Can't we sing something with decent lyrics, for a change?'

Rafe rolled his eyes, which made his halo go funny colours. 'Why is Gabe up here, anyway? He should be down in the pit with the brass section.'

There were yells of protest from the orchestra. 'No way!' shouted the first trumpet. 'You keep him up there! We don't want any runaway avantgarde solos in this concert. Last time, he broke into a twelve-tone improvisation in the middle of 'Sheep May Safely Graze'. And all the sheep ran away.' There were murmurs of agreement from the other instrumentalists.

Sandalphon tapped the stand with his baton. The orchestra played the introduction, and the angels sang.

Barachiel missed a cue and they had to pause to start over. Gabe tried again.

'I can think of so many better songs to sing than this,' he complained. 'How about 'Do You Hear What I Hear?' Or 'An die Freude'?'

Rafe thought. 'We've got to wake up some shepherds, right? How about 'Rise Up, Shepherds, and Follow'? That ought to be pretty direct.'

Sandalphon looked stern. 'We have to sing 'Hallelujah!' It's…traditional.'

'How can it be traditional if we haven't done it yet?'

There was no answer to that, other than 'one, two, three, four…'

During the next break, Gabe proposed 'A Spaceman Came Travelling'. This was discouraged by Elijah, who was sitting in with the band and gave them chapter and verse on what people thought they saw when a spaceship happened by for a pickup. 'The chariots of Israel, and the horsemen thereof,' he chanted ironically.

At this point, Rafe suggested 'Ezekiel Saw the Wheel'. This was shot down.

In short order, Sandalphon nixed: 'Quelle est cette odeur agreable?' ('What exactly are they supposed to be smelling? No, don't tell me.'), 'In the Bleak Midwinter' (pointing out that it wasn't winter down there, anyway, it was spring, and there was a conspicuous lack of snow in Palestine), and 'Personent hodie' ('Aside from the other issues, we refuse to sing in Latin because Upstairs does NOT approve of Roman foreign policy.').

A kibitzing cherub suggested 'The Little Drummer Boy' and was sent packing.

Finally, the rehearsal was over, and everybody broke for lunch.

Rafe munched on a sandwich. Barbecued lamb on pita. 'Barbecue, always barbecue. Why?'

'Because the food comes from that Temple down there,' replied Gabe. 'Could be worse. I believe there are religions which sacrifice people…'

'Exactly. So shut up and eat the gyros.'

Gabe googled around on his skyPad. 'Hey, now this is a song,' he commented. 'It's from way down the timeline, but it really gets down to it.' They listened.

But I've heard about the eye of the needle, and what will come to pass

When the last of us shall be first, and first now be the last.

In my father's house are many mansions…

'Wow!' said Rafe. 'You're right! That's the message! Where did he get that 'eye of the needle' stuff?'

'Something the kid says,' replied Gabe. 'Let's show this to Sandalphon.'

Sandalphon liked it, a lot. 'Well, it isn't the usual sort of style, this…er, country music? But shepherds live in the country, not the city. And the sentiment is sound.'

So they ditched the Big Chorus, and sent the orchestra back to playing the Music of the Spheres (and inspiring some guy named Holst), and went down to wake up the shepherds with a couple of harps and an ensemble.

In my father's house are many mansions,

Though tonight some make their beds along the street…

'And what did the angels sound like?' asked Joseph.

'Oh! It was magnificent! It was a multitude of the Heavenly Host, praising and singing! Biggest sound we ever heard in our lives!'

What the shepherds heard, of course, was