The Chase is an action-filled story from medieval England. Things might get a bit rougher and less picturesque than you remember from the movies. Go to the link to read the entire story from start to exciting finish. 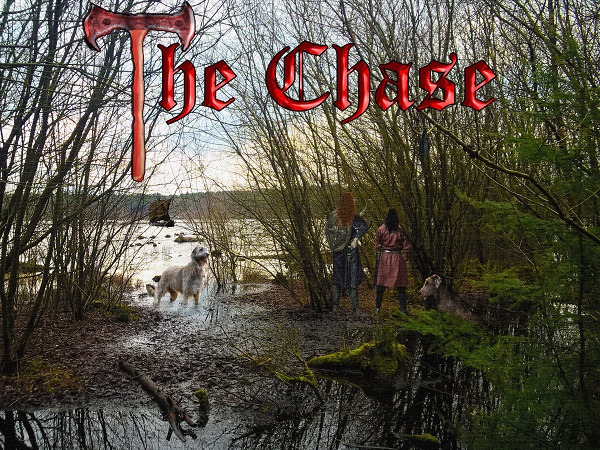 Rulf was sick as soon as the ship left the river, sicker throughout the voyage across the choppy Irish Sea, much to the amusement of the crew, remained sick, as the Sí mac Tíre navigated the River Suir into the settlement at Waterford.

How these seafaring folk survived any journey was beyond him, the sea was indeed a cruel master.

He couldn't conceive of anyone choosing this life over life in the forests. Give him green, solid earth over the rolling waves, the mere thought of waves making his stomach churn again.

Once on dry land he felt better, legs wobbling as his body adjusted, fresh air and greenery around him lifting his spirits.

He was given provisions and directions to Tadhg's half brother's homestead, and also a few coin to give to Eóghan for his loss, as was tradition.

Tadhg waved farewell to the crew and set off unsteadily into the beautiful countryside.

And beautiful it was indeed, Rulf dawdled along, enjoying the greenery that reminded him of his own homeland.

Thoughts of Ma, Da, and Rowan, entered his head for the first time in weeks.

He wondered how they were, worried about their safety should Goubert seek vengeance for his escape, fretted that they may still pay for his crimes?

Would the bearer of such news be welcome? Where would he go if he was unwelcome? How would he survive in this strange land?

Questions swirled in his mind, like the knaar on the Irish Sea, making his head swim, and his stomach churn again.

He decided to stop and eat, sitting on a fallen log, enjoying the views of the hills and woodlands around him, Rulf dug out his pack and grimaced at the black bread and saltfish breakfast he'd been provided.

Chewing on the meal with little enthusiasm, he heard something moving in the underbrush.

He half turned, stiffening as three of the biggest hounds he'd ever seen emerged from the trees, snarling and growling, they fanned out, hackles raised, surrounding him in a well rehearsed hunting pattern.

Rulf knew hounds, knew they were waiting for the pack leader's permission to attack. He looked around for the Alpha, bushes parting to his left.

He carefully, slowly, turned to face the new threat, knowing there was no way he was getting out of this without serious injury at best.

Out of the trees came the hounds' Alpha.

The giant bearded man, dressed in woollen léine , pointed his blade at the boy, giving a stay command to the wolfhound.

'I hope you're not eating my game, little boyo? My dogs would not take kindly to a poacher on my land!'