A Place to Call Home is set in Vichy France during the Second World War. Danielle, who is Jewish, has married Michel, who isn't. Life is full of danger. You'll want to read all their adventures.

A Place to Call Home: Chapter 13 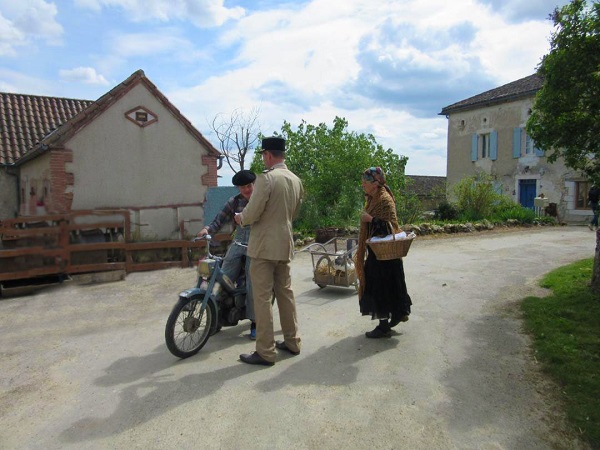 Michel drove towards Agen as fast as the lorry would manage. The road had been neglected during the war, and was full of potholes, so the lorry lurched and bounced. Jeannot started crying and Danielle held him close, talking and singing to comfort him. After a while, Michel slowed down. He realised too much speed might attract attention. Besides, he was responsible for the safety of Danielle, and little Jeannot. He was suddenly overwhelmed by an awareness of how much his wife and son mattered to him. Slow and steady was more prudent.

They were approaching Agen when they saw a check point near a crossroads ahead. It was manned by two armed policemen.

Michel swore. "Surely they won't be looking for us."

"I'll get the forged papers out, just in case."' Danielle fumbled in the bag that lay between them on the seat.

Michel slowed for the checkpoint and showed the papers.

The policeman looked into the lorry. "What's your business?" he asked.

"I'm a mechanic. I'm going to pick up spares. My wife's come with me to visit relatives," said Michel. He was aware he was sweating and hoped his nervousness didn't show.

The policeman looked at the papers then nodded. "All right."

Michel gave a long whistle as he drove on. He was familiar with the road through Agen and found a place near the station to park. They walked towards the house where they expected to find the people who'd acted as contacts for the families who had moved on from their house.

Michel looked down side streets and watched groups of people as they went. There was always a chance police or informers were watching.

The turned into a side street and approached an unremarkable house. It was two storeys high, but narrow, covered in greying rendering, with grey-blue shutters. As Michel was about to knock on the door, he noticed it was slightly ajar. He put out his hand to stop Danielle, who was close behind. Slowly, he swung the door wide open.

A scene of disarray met his gaze. A cupboard in the hall was open and a pile of coats and hats was strewn across the floor. He made his way into the living room. Danielle followed with Jeannot in her arms, hugging him close in an attempt to stop him crying. All the cupboards had been opened and piles of paper and books lay on the floor. The carpet was crumpled and stained with blood. Some of the chairs had been tipped over and one was broken.

"They've been taken away," Michel said. He felt a sudden hollowness inside. It had been a wrench to leave the garage and house in Caillac but he'd hoped there would be a safe refuge in Agen. Now that had gone and he knew he was running out of options.

"Do you think there's anybody left in the house?"asked Danielle in a whisper.

Michel righted one of the chairs. "Stay here and I'll go and look."

Michel made his way up the stairs. The place had all the appearance of a family home. There were two children's beds in one room but, even here, the cupboards and chest of drawers had been flung open and searched. In the main bedroom, the bedclothes had been stripped from the bed and dumped on the floor. There was a small spare bedroom that appeared to have been unoccupied. Michel looked up to the ceiling and saw a hatch which could open into attic. A ladder had been left in a corner, so he raised it and climbed, listening for any sounds. He flung the trapdoor open and pulled himself up. There were two mattresses on the floor, which had been ripped up with a knife. For a while, he stood and surveyed the scene. He returned down the ladder with a deep sense of foreboding in his heart.

When Michel came down the stairs, he found Danielle standing in the middle of the room, with Jeannot in her arms, and tears running down her pale face. "This could so easily have happened to us."

"Do you think the people who did this will be back?"

"Probably not, since they've obviously taken away the people who lived here. But they might be watching the place. I don't know."

"I hate to think about the people who lived here."

Michel nodded. "There were children here."

"What will happen to them?"

He shook his head.

"Where do we go?"asked Danielle and he could hear she was trying hard to stop crying and regain her normal self-control.

Michel made an instant decision. "We'll leave Agen by a side road, go back towards Beaumont and ask Henri if we can stay at the farm."

Danielle looked at him and raised an eyebrow. "I thought you weren't on the best of terms with your brother."

Michel thought of the last time he'd seen Henri. There had still been a kind of resentment in his manner, but they had been able to work on the farm together. Surely his brother wouldn't turn them away. "We don't always agree, but he's still my brother."

A Place to Call Home Archive